It's a little bittersweet. It's been fun, but now it's all over. I'm exhausted, but I don't want it to end. Spreading it out over 2 weeks had a mixed effect. On the one hand, I had days when I didn't have to show up. On the other hand, 2 of those days I showed up anyway because the movies playing that night were so awesome. Other than one day, I never had to show up before 7:15 (and even then, that was because I took almost all of one day off to watch a soccer match), so it was easy to keep my normal work schedule. On the other hand, there was never a sense of "I must see this movie at this showing" urgency, which really keeps my blood pumping. As for the movies, I think my reviews speak for themselves. Some I loved, some not so much. It was still a great party, and the bottom line (I have on good authority) is that the festival actually broke even for the first time in its brief history. So at least there's no more talk of "we don't know if we can afford to do this again next year".

Oh yeah, and I watched a movie last night. The closing night film was "Unearthed" by Matthew Leutwyler (who made "Dead and Breakfast", the musical horror-comedy which played at Holehead 3 years ago). This time he made a straight forward horror monster movie. On the way to a small town in the middle of New Mexico, a fuel truck is attacked by a mysterious creature, leaving the local gas station empty, and locals and visitors (including "Chapelle's Show" star Charlie Murphy) stranded. The monster (judiciously used CGI, although it looks a bit too much like "Alien") then starts attacking the town, and they all turn to the sheriff. Trouble is, the sheriff is an alcoholic woman who is about to be fired and run out of town for an incident in which she shot and killed a little girl. However, she really is a good person, and the main drama in the movie comes from her redemption. All in all, a pretty good genre exercise, and (perhaps just because I believe most horror nowadays is political) I liked the subtext that running out of gas is the cause of the trouble (not to go into details, but the monster is brought up to the surface from too much digging in the earth--hence the title). I also kinda dug the Native American aspects of it. Here's a pic of two of the producers, TyRuben Ellingson and D. J. Marini: 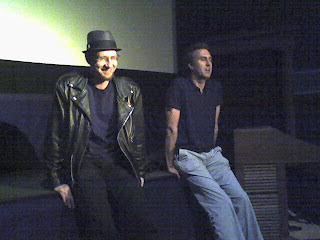