Five movies, three with shorts, so let's jump right in.

First up was the CGI animated "Race", which had about 5 filmmakers/friends of filmmakers present and just slightly more audience members. Which is a shame, because it's a pretty good movie. Their idea was to make a movie that plays kind of like a video game, which surprisingly works better than most attempts to make a movie out of a video game. The animation looks pretty cool, even though the projection was a little too bright. The major fault I could point to is that the story is so complex and fast that it can be hard to follow. It's the sort of expansive universe that can fill a few seasons of a TV series, but is hard to cram into 90 minutes. It's the distant future, the universe is governed by an alliance, and the most popular sporting event (and a sort of surrogate for war) is the Star Car 500 race. The evil Tagmatians have won the past five years, and are also planning to overthrow the Alliance and seize control of the jump gates that allow interstellar travel. Meantime, they have a secret contraband source of core (the fuel for Star Cars)--a being of dark energy called Draka. The universes last hope is team Earth, stubbornly refusing corporate sponsorship and led by brash young pilot Trance Caldron. Team Earth also has its own core source--a being of light energy who's fighting to maintain balance with the dark energy being. Okay, I guess it is possible to sum up the plot, but I'll stick by my assessment that it's ambition fits better in 20 hours than in 90 minutes. Here's a pic of director Robert Brouseau (standing in the audience): 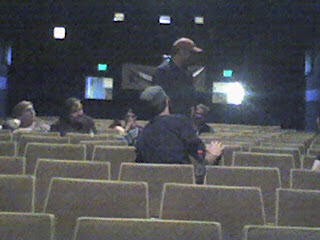 Next up was a totally insane Korean animated film, "Aashi & Ssipak". Most of the grunt work for American animation is actually done in Korea, and I get the sense that this is the product of Korean animators who were sick and tired of making kids movies. So they created a world where the only remaining fuel source is feces, everyone at birth is implanted with an anal chip to monitor defecation, and are rewarded for pooping by being given highly addictive popsicles. However, addiction to the Juicy Pops has created a race of psychotic smurfs called "the diaper gang" who can't poop. There's a cyborg cop hunting them, and the government is ruled by a little girl. The title characters are hoodlums running a small time Juicy Pop smuggling operation, and Ssipak falls in love with a beautiful woman, but when she's kidnapped by the diaper gang, bloody hilarity ensues. Plus there are gobs and gobs of movie references, so besides tickling my crazy side, it also appeals to my movie geek side. Awesome!

And then the bloody part of the night started, although the real theme of the night (and much of the festival) was vomit (another theme of the festival--abuse of doggies, which is kinda sad but they're just movies, and why should I be bothered more by killing dogs than killing people? Oh yeah, because most people suck while most doggies are cool).

First up in the Holehead part of the night was "Zombie Farm" with the short "Zombie Island". The short was a cool little piece about a trio of kids in Canada who pay a crazy old guy to take them hunting on an island infested with zombies. Of course, bad things happen. It also features a cameo by Mark Borchardt of "American Movie" (and the director of "Coven")

"Zombie Farm" started out with a promising idea--terrorists contaminate a small town water supply with a chemical that turns people into slow-moving flesh-cravers. A good number of jokes work well, and the blood and gore is copious and enthusiastically (if not realistically) done. But overall, the movie was kinda disappointing, given my high hopes. Granted, it was done for very cheap, so I can forgive the poor acting (not by all, but by enough. Inbred Jed should be singled out as one of the good ones, as should the ex-military survivalist and the lone survivor at the end). I can even forgive the amateur cinematography. But what irked me is that the victims (the classic college kids on their way to a party) were so unlikable that I wanted them to die faster and bloodier. I don't know, annoying characters getting butchered in horror movies has long been a staple, but maybe I'm grown up enough now that I want someone (other than the zombies) to root for. Here's a pic of the team from "Zombie Farm". On the far left is Holehead programmer George Kaskanlian. I don't know all the names of the Zombie Farm team, but the tall guy 3 over is director B Luciano Bursiglia, two over from him is star Bobby Field, and on the far right is Inbred Ted Chris Leone. Somehow I just cropped out Jed Rowen (Inbred Jed): 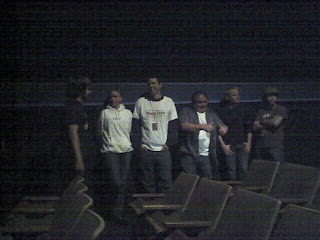 Next up was a little gem, "Automaton Transfusion" with the best short of the festival, "Of Darkness". The short is a story of some kids who find the Necronomicon (Book of the Dead) in a trunk of their recently deceased grandfather's stuff. Darkness ensues. What I really loved is how they used no blood, no gore, and no monster shots, but they still got me to laugh when I should and be scared when I should. Excellent pure filmmaking skills. I've been informed that they're expanding it into a feature film. I can't wait.

As for "Automaton Transfusion", it wins points for having the most audacious trailer, claiming to be the horror movie that will define its generation. I'm not sure if I'd go that far, but it is a very, very good movie. High school students suddenly find themselves in the middle of a plague of fast-moving zombies. The origin, explained near the end, actually justifies them being fast (you can read it in the festival description, but I prefer not to give it away). This was shot on the extreme cheap in 9 days, but it still looks good, the characters are developed well enough for me to actually care about them, and the camerawork is exciting without devolving into nothing but unfollowable shaky-cam, and they got a surprising number of zombie extras for such a low-budget film (the director must have lots of friends). Really nearly everything works except the way-too-abrupt ending, which is a function of the filmmakers not having time or money to shoot the ending as it was originally written (involving helicopters). However, Dimension Films has bought the remake rights, so expect this version to come out on DVD in September, and the big money version to hit theaters next summer. It's also part of a planned trilogy, so I can't wait to see all three. Here's a pic of director Steven Miller: 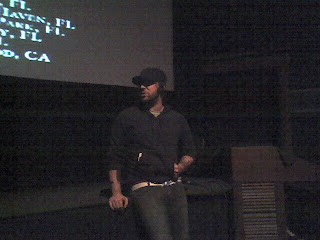 "Driller" was a good old sleazy, cheesy, balls-out low budget horror flick, based on an independent comic book of the same name. Starting with an alien invasion, and ordinary guy is implanted with a mask and a brain control device which the aliens use to make him drill through classic horror cliches. The peeping tom and the showering woman. The oversexed teens, the undersexed nerd, the wasted rock band, the redneck thieves/rapists. The gore is good, although the driller never really develops a good horror monster walk (you know, Jason's or Michael Meyer's ability to slow-chase but still be scary as hell). But that's kind of a minor point in a movie that's pretty darn good, if you can forgive ambition that reaches beyond its low-budget limitations. Here's a pic of director Jason Kartalian: 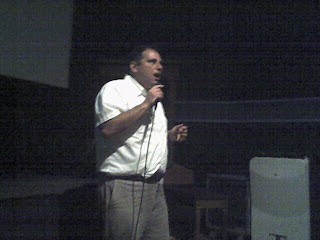 And that was Saturday at Holehead. Five more movies Sunday, then I'll have seen everything but the closing night film and the Primitive Screwheads production of "Night of the Living Dead--Live"