I should point out something new about Holehead this year. During the day, it's actually "Indiefest Gets Animated", a festival of animated films. Because apparently no one (except me) wants to see a lot of horror movies during the day.

So the day started out with a free nostalgia screening of "Space Battleship Yamato: The Movie". I think I vaguely remember watching this on TV (I would've been 5 at the time, and it was called "Star Blazers"). Or maybe I'm remembering a similar serial anime show from my childhood. Anyway, they took the 78 half-hour episodes and chopped it down to a movie that's slightly over 2 hours long. As a result, all the development is lost and dangers are presented and resolved within minutes. It's really a pretty stupid way to watch it, but gives you a taste of what the series was about. As for the plot, for any who remember it, it's 2199, earth is under siege by the Gamilons. The surface of the earth is uninhabitable, humans live underground and the poison infecting the surface is seeping down inside, too. Mankind's last hope is an old battleship, refitted to be the space battleship Yamato, which must travel thousands of light years to Iscandar, get the device that will save the earth, and return safely--all while battling the Gamilons. It's actually kind of frustrating seeing the chopped up version and knowing there's so much more beneath it, but there was no time to see the whole series, and it was at least worth the price.

So then I saw Animation Program #2, a series of short animated films. Here it is quickly:
"Gnaritas Monstrum"--cool, stylish black and white shadows about two girls and a gnarly monster.
"The Runt"--It's from Indiefest, so it's gotta be about bunnies! A little boy saves the runt of the litter...for one year.
"Fraught"--Rotoscoped animated documentary about people's most embarrassing moments. Nice use of many different styles.
"Not The End"--It could be the end, but it's not. There are so many questions left unanswered, like why did the cactus leap from the ledge?
"Coffeee"--It keeps you awake. You need it!
"Princess"--Princess is a good kitty. She gives her old lady owner love nibbles.
"Deadtime Stories"--From Mariachi goose, a new take on classic fairy tales.
"The Ballad of Mary Slade"--Her life and untimely death, told by the bugs eating her flesh.
"Pillow Girl"--200 covers of lurid paperbacks morph into each other. Pretty cool at first, but I think 100 covers would've been enough.
"Dreams and Desires"--The dream is to be a great filmmaker. Beryl starts with a digital camera and shoots a wedding. Disaster ensues.
"Raindrops Keep Falling on the Dead"--Very cool black and white music video with sexy angels and sexier demons.

Here's a pic of (from left to right) 2 of the guys behind "Deadtime Stories" (sorry I didn't catch their names or what they did on the movie), Ethan Clarke who made "Princess", and Maia Tarrell who made "Fraught": 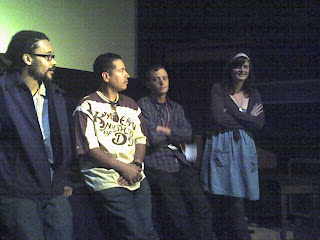 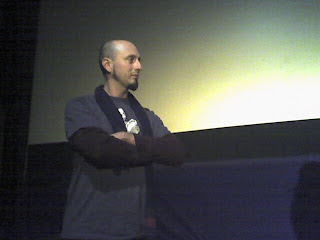 Next up was a program of Plymptoons, short cartoons by Bill Plympton, longtime Indiefest favorite. Many of them were classics I've seen many times before, like "Your Face", "25 Ways to Quit Smoking", "Parking", "Eat", "Guard Dog" (and its follow-up, "Guide Dog"). Then their were a couple of music videos, Kanye West's "Heard 'Em Say" and Weird Al Yankovic's "Don't Download this Song" (hilarious). There was the weirdly sweet "Gary Guitar", about a guitar who goes on a picnic with a violin, but doesn't invite Danny D. There was his new short, "Shuteye Hotel", a noir Plymptoon about monstrous murders in a hotel room. And there were excerpts from his in-progress feature, "Idiots & Angels", which from what I can tell will be about a jerk who mysteriously starts growing angel wings. But possibly my favorite is the one Bill Plympton produced, but didn't direct. "Spiral" is actually directed by W.P. Merton, and is a satire of art-house experimental shorts. An audience gets increasingly frustrated with dancing geometric shapes.


So finally the fantasy/horror/sci-fi (ya know, real holehead) part of the program started with "El Muerto", based on an indie comic book by Javier Hernandez. Wilmer Valderama (of "That 70's Show") stars as Diego, and it opens with a young Diego attempting to cross the border from Mexico into the US, but falling behind with an old man (perhaps his grandfather, I wasn't clear on that). Before passing away, the old man leads young Diego through an Aztec ceremony, something that leaves teenage Diego with periodic blackouts and an abnormal fixation with Dia de los Muertos. On his way to a Dia de los Muertos party, he has one of his episodes, crashes his car, and dies. But the love of his girlfriend Maria (Angie Cepeda), who happens to be the local Catholic priest's niece, brings him back. Or perhaps it's the fact that he's the chosen one of the Aztec god, who will bring vengeance to the Catholics who conquered the Aztec empire and bring about the new age. Granted near invincibility and a healing touch, but cursed with apocalyptic visions he can't control, he walks the earth trapped between two worlds. I should say, although this is in a horror festival and it deals with death and human sacrifice, this is more of a fantasy/action movie--this is not out to scare you. But it does entertain, it's very well made, and it has a wonderful heart (and not just the ones ripped out of bodies). Here's a pic of "El Muerto" comic creator (and associate producer on the movie) Javier Hernandez: 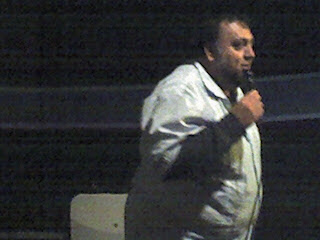 And finally, there was the hippie vampire action flick, "The Thirst". It starts out very well, as it introduces Will (as in free will?) Hawkins, a shy pacifist college student. He's renounced violence out of fear of becoming like his abusive father (never seen, but referred to). His best friend/roommate is an ROTC guy (who's ROTC buddies give him grief for rooming with a hippie) and he has a crush on a cute girl in his biology class (currently they're just friends, but he wants more because she has boobies). Meanwhile he's picked on by the local frat leader, who's a real jerk (and a rapist and woman-beater). He actually practices tai-chi, and is good enough he could defend himself, but refuses to fight. All this is completely turned upside down when he 1) kills the frat jerk in an act of self-defense, and b) is bitten by a vampire shortly thereafter. He could in fact be the new leader of a local vampire coven, but he refuses to drink the blood and turn fully because he's a vegetarian. Hence my comment about his name being a reference to free will. Where the movie loses it's legs is actually inside the vampire coven. I can't put my finger on it, but that part wasn't nearly as interesting as the human world. The vampires, rather than being sexy and powerful, come off as petty, shallow, and effete. Likewise the sentries (warrior monks who hunt vampires) come off as fairly one-dimensional, too. It's a shame, because A. J. Draven did a great job as Will, and was very cool. But there's a little too much in the movie that feels rushed and low-budget (which, in fairness, it is). It's a very, very near miss, and it still has a lot to recommend it, it just didn't quite succeed with me.

Here's a pic of star/producer A. J. Draven (Will), writer Ramesh Thadani, and director Tom Shell: 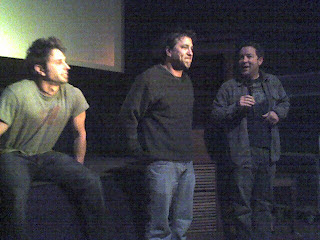