Weigh-in this morning, 215 lbs. I've lost 7 lbs. in 2 days. I assume that's mostly crap. But that'd be nearly 3 Courics, and I don't think I've pooped that much.
Anyway, I'm feeling slightly weak, with a slight loss of fine motor control, particularly when walking. But the effect feels less than having a beer.
Today's apple is one I've never tried before: a Red Rome (not to be confused with "redrum"). Pleasantly sweet, slightly tart. But also soft and kinda mealy (nothing like a good ol' Granny Smith). I don't think I'll be trying the Rome again any time soon. Unless I'm in Rome and have to do as the Romans do. 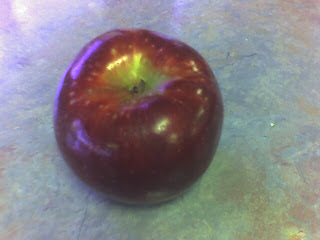 In other weight-loss news, there's apparently a new study out claiming that sitting down all but shots off a key enzyme responsible for burning fat. So even if you exercise and eat well, if you sit a lot when you're not exercising (like for your job or at home), you won't burn much fat. This is interesting to me for a couple of reasons. First, I sit in front of a computer a lot at work. Second, my primary form of recreation is sitting and watching movies. I always rationalized that I actually lose weight watching movies because so often I skip meals to see a movie (yes, that is true), and I would mock fatasses like Harry Knowles or Roger Ebert (from a few years back), saying they couldn't really like movies that much if they obviously spent a lot of time eating, too. Well, looks like skipping meals to watch movies doesn't actually help burn fat. I guess I'll have to eat my words--but not until Friday when I can eat something other than an apple.
Posted by puppymeat at 1:00 PM