Just two more days of the festival left. First up was "Ping Pong", and here's a picture of the director, Matthias Luthardt: 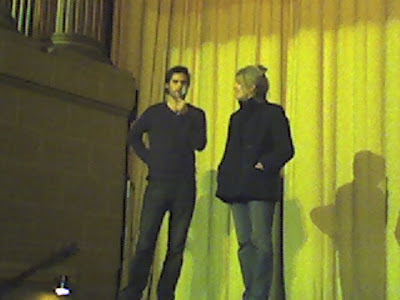 "Ping Pong" is another brilliant first feature in the festival, and another movie about severely messed up people (seriously, is it just Germany, or is the whole world f-ed up this year?). Paul's father just committed suicide, so he goes to live with his aunt, uncle, and cousin in the country. But they're the sort of family that prefers to let things fester quietly rather than talk about it. Uncle Stefan (Falk Rockstrah, also from "Combat Sixteen") is absent most of the film. Aunt Anna is cool to Paul at first, heaping all her affection not on her son but on her dog. Cousin Robert is a piano prodigy and an alcoholic. Paul starts to make himself useful by retiling their pool, but he has a growing attraction to his aunt that might just be mutual. All through everything, the ping pong table becomes a way to pass time without the unpleasant business of having a conversation. As one audience member commented in the Q&A, "This movie is completely twisted from start to finish...and I loved it!" One word of warning, the ending is not suitable for dog lovers. And at first, that was the only thing that upset me about the movie. But the more I thought about it (including during my drive into work this morning), I think the ending is perfect. I don't like giving away spoilers, so if you want to know the ending, read the comments at your own risk.

Keeping with the classical music theme, but going perhaps even darker, the next film was "Vier Minuten" ("Four Minutes"). On one hand a celebration of music even from inside prison, and on the other hand a bomb of emotions (positive and negative--mostly negative) exploding on the screen. Jenny is a tough young women serving time in prison for murder. Traude is the elderly music teacher who's been teaching the inmates since WWII. Traude becomes obsessed with Jenny, obstensibly for her musical prowess but perhaps something more. As Traude tutors Jenny for a big music competition (which has become great press for the prison), secrets about their past are revealed--especially about Traude's secret lesbian affair with a communist prisoner. Meanwhile Jenny is being tormented in prison--both by her fellow inmates and by a guard who's jealous of her abilities and the time Traude spends with her. All of it leads to a final concert in which Jenny has four magical minutes to reclaim her life with a performance that's unforgettable.

Posted by puppymeat at 7:34 AM

Okay, here's the spoiler ending of "Ping Pong", and why I loved it so much:

Paul has finished the pool and they've filled it with water, but things are pretty much going to hell. As a passive-agressive act, Paul throws the dog (Schumann, did I mention the dog's name is Schumann?) into the pool. He (Schumann) doggy-paddles around for a while, but can't get out. It's pretty obvious that with no assistance he'll drown. Paul goes inside and goes to bed, presumably leaving Schumann to drown. But then a minute later you hear Anna laughing and talking to Schumann, so you figure everything's okay. Either Schumann got out somehow, or Paul fished him out, or Anna did, or whatever.

Then the next morning Paul is gone. Anna goes out into the yard looking for him and calling his name. Then she stops at the pool and starts screaming. At first I think/hope that maype Paul committed suicide and drowned himself in the pool, but of course it's Schumann dead.

Okay, so first I love the fact that it drew a response from me of "Oh God, I hope he just committed suicide instead of killing the dog!" Second, it makes the sound of Anna talking to Schumann the previous night take on a new meaning. Apparently she was dreaming about Schumann. It's already been well established that she cares more about her dog than her family, and this just underlines it (with a possible hint of bestiality, or maybe that's just all in my mind?)