Jason goes to B&B and sees 'The Kick' 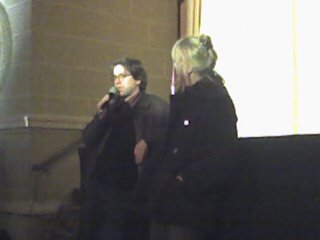 And here's a picture of the director Andres Veiel.

The Kick comes out of the true life crime story of three young men (two juveniles, one an older brother) who got caught up in the skinhead culture and beat and murdered a guy they knew (they claim it was for being Jewish, although they didn't even know what that meant). Anyway, the director Andres was frustrated in his attempts to make a straight forward documentary about the case, so he took the few interviews he had, added trial and interrogation transcripts, and made a non-linear play with just two actors playing all the roles. Then he turned his play into a movie (still with the same two actors). It's an interesting experiment, and certainly a masterful performance by the actors, but it's just too wordy, especially if you don't know the language and are reading subtitles the whole time.

Posted by puppymeat at 6:44 PM