Jason continues watching Berlin and Beyond

Okay, when I last left off, I had seen a series of short movies. Here's the quick rundown:

Leroy Cleans Up: Leroy, a groovy young black man (complete with big-ass afro) riffs on racism in Germany with his Greek best friend, his white girlfriend, and his girlfriend's skinhead brother and his buddies.

Ego Sum Alpha et Omega: Animated in crisp black and white, about the strict linear progression of man from hairless ape to modern industrialist and back again.

Promenade D'aprés Midi: Black and white (with a hint of red) photo-animated world turned upside down. With an umbrella.

Delivery: Computer animated story of an old man getting a mysterious box which happens to hold his entire universe. Hey, I remember when they did that on Futurama! It's still cool here.

Mozart Minute: 26 Austrian filmmakers were invited to make 1-minute films about Mozart. Some made movies about his music, some about his life, some about the Viennese tourist industry based on him. I won't go into all of them, but it did answer two burning questions. First, what would Mozart do if he lived in America today (Answer: fart in the president's face). Second, how do you make one minute of Mozart music feel waaaay too long (Answer: set it to a movie of two nake guys sitting on couches opposite each other jerking off).

And that's that for the short films. Up next was "The Boy Without Qualities" by Thomas Stiller (picture in previous post). The boy in the title is Tim, a 20-something young man still living with his mother (or so he thinks). Tim has problems distinguishing reality from fantasy, and has long talks about life and love with his dead father. He also has the same nightmare every night and always wakes up with a terrible headache. He muddles through life and starts a tentative relationship with Claudia, the lady who works at the fried fish stand he frequents. Claudia herself is a victim of violence and in pursuing their relationship Tim must learn to accept the horrible secret from his childhood and start living in reality. It's a tremendous, gripping story well told with some amazing surprises at the end.

Next up was "Valerie", the festival's award winner for best first feature. Here's a picture of the director Birgit Möller (center) and one of the producers (who's name I apologize for forgetting, left): 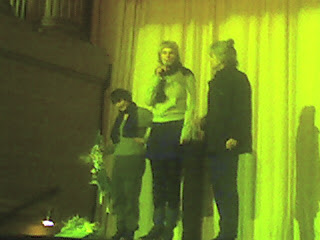 "Valerie" was a fascinating story of a "shadow woman"--a woman (specifically a model named Valerie) who is broke and homeless but keeps it a secret while living the glamorous life of a model. She was once very successful, and too proud to admit that she's fallen on hard times. When she's stranded at the Berlin Hyatt without the money to even get her car out of the parking garage, she goes on living out of her car (bickering and then ultimately befriending the security guards down there). To the outside world, she still pretends to live at the hotel, sneaking into rooms to eat their room service leftovers or sneak a quick shower. Really, she's amazingly clever and resourceful, and it's fascinating how pride becomes such a mental disease that she can't put her resourcefulness to work actually digging herself out of the situation (she won't even pawn her expensive clothes). One of the best illustrations of this is when she steals a handful of change from a photographer friend of hers (bear in mind this is Europe, so change can be several euros). Instead of using it to get her car out of the garage or buy a decent meal, she simply walks through the hotel and gives a generous tip to one of the bellhops--it's all about keeping up appearances. But as days go on (she's officially homeless for 4 days) things get more difficult, and she even comes very close to prostitution (still, she's too proud to do that, instead getting beaten up by her prospective client). A wonderfully executed fascinating look at a desperate situation, and Agata Buzek does a wonderful job as the title character.

And the final movie of the night was a bit of ultra-violence, "Combat Sixteen". Here's a pic of the director, Mirko Borscht: 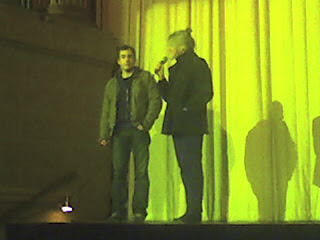 "Combat Sixteen" is the story of Georg, moving from west Frankfurt to east (Frankfurt/Main to Frankfurt/Oder). Although not geographically far away, it's a whole different world and he's immediately picked on by the local toughs. Lucky for him, he's the state Tae Kwon Do champ, so he easily and efficiently kicks their collective ass. And things might be okay, but unfortunately he wins the respect and admiration of the gang leader Thomas, who decides to recruit him (Thomas even quotes from "The Art of War" to impress Georg with his intelligence). He resists, but he has little else to fall back on. His friends are away, his father is too busy for him, his sister is involved in her wild art projects, there's not even a good Tae Kwon Do club in town. So eventually he agrees to help train Thomas in exchange for room to practice, and from there they become uneasy friends and the situation eventually spirals into a hell of neo-nazi gang life. Two things really impressed me. First, the theme (both literal and metaphorical) of how in Tae Kwon Do mastering your emotions and keeping control is key, but as he loses control he becomes vulnerable. Second, I was really impressed with how real and brutal the violence looked. This was dirty, fist (or foot, or bat) on flesh and bone violence, not pretty acrobatics. Very impressive. By the way, this was also a first feature film, and that just makes it all the more impressive.