All right, let's jump right in to it, since I have just an hour or so until I have to hop on the BART for today's movies.

Docfest (for me at least) opened with a nearly-packed-house screening of the Reverend Billy movie, "What Would Jesus Buy?" That's Rev. Billy, of Reverend Billy and the Church of Stop Shopping. I've seen a short movie about him before, and I've seen him at Burning Man (Chicken John and Larry Harvey were at the screening, as was Joan Baez, making it quite an illustrious crowd). The Reverend Billy and his gospel choir use street preacher theatrics to attack consumerist culture (especially Wal-Mart, Starbucks, and Disney, to name a few) in a hilarious manner but with absolutely serious intentions. In this movie, he aims his "activtainment" (I'm still working on the right word for activism + entertainment) at the hyper-consumerism that surrounds Christmas--the spirit that's turning it into a season of dread and debt rather than peace and joy for far too many Americans. He calls this evil the "Shopacalypse" and performs public sermons and cash register exorcisms to fight it. As I've said, I've seen him before and honestly although I've always enjoyed his performances I figured he's really just preaching to the converted. This movie is the most polished, best presented take on his message (credit director Rob VanAlkemade and producer Morgan "Supersize Me" Spurlock). In the first five minutes, when they juxtapose Rev. Billy's peaceful performance with footage of people literally trampling each other (to the point where victims are hauled off in ambulances) trying to get the latest "whatever is hot", you realize where the insane joke really is. That image stuck with me through the movie and informed everything else. So when he's harassed by security at Mall of America, or when he's arrested on Christmas Day (Christmas of 2005, if you're interested), you realize that the police and security are there to protect the dangerous stampeding horde from the peaceful protest. And that, dear readers, ought to be able to convert someone to Stop-Shoppingism.

On a personal note, I come from a fairly large family (I'm the second of six kids), so Christmakkuh (half-Jewish, y'all!) had become a pretty big gift-buying and gift-giving production. My big brother Eric had tried to curtail it, suggesting we put price limits or just give one gift to the whole family or draw names and give gifts to just one person (what we did when we were poor kids growing up). I confess I was actually against it, but last year I (and the rest) gave in. So now for Christmakkuh we each give one gift that requires the family to spend more time together. It could be taking everyone to dinner, or cooking a dinner at home for everyone, or taking everyone to the zoo (BTW, the Anchorage Zoo in winter is actually pretty neat!). For me, I've started the Wiener Family Film Festival, where I bring a sampling of the best obscure movies from my collection and force my family to watch them (now I have a great time not just watching movies, but picking out which ones I'll inflict on my family). Anyway, I just wanted to say it worked out great and thank you Eric for twisting our arms!

And, as a final question, if I can't wait for this to come out on DVD so I can buy it and give it as a Christmas present, did I completely miss the point? Anyway, here's a pic of the good Reverend at the Q&A afterwards: 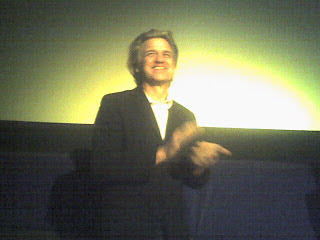 But that's not all! I saw a second movie last night, "El Mechanico Loco", the story of race car mechanic/owner Jeff Milburn. A crazy, manic, tattooed punk/geek who idolizes Patton and drinks Kool-Aid instead of beer. He used to race motocross until he broke his back. He was gonna be in a wheelchair for the rest of his life until he decided to get up and start walking again. And he builds his own formula racecars from spare parts at the junk yard. He doesn't win races, but for a tiny fraction of the price his team has finished as high as 10th (out of ~30). Now he's trying to break into NASCAR. The film mostly follows him through the last two races in the Formula Ford season where he's entering two cars--the black car which he's built and raced all season, and a red car which he got from a swamp in Florida and has less than a week to A) get into racing condition, and B) find a driver for. However, director Chad Jackson eschews a traditional linear narrative to jump back and forth in time with quick edits that enhance the manic nature of the the character. He'll jump from the tattoo parlor to motocross footage to a windstorm at the racetrack in a matter of seconds, and although it can be hard to keep up, the important (or just plain cool) elements are repeated and it's exhilarating to watch it. Of course, this is a documentary not a Hollywood sports movie, so there are no miracle wins. Just finishing at all--much less in the middle of the pack and moving up several places--is a victory. And Jeff is proud and happy enough in his modest victories that you go along for the ride. As a side note, he makes a lot of his money either doing spot welding for people at the race track (he's very proud of his welding, at one point comparing it to Michelangelo's painting) or building hot rods for friends--including Jim 'The Reverend Horton Heat' Heath. I mention that for two reasons--first the rockabilly soundtrack carried the movie along perfectly, and second because both movies so far have featured a fictitious Reverend. Do I detect a theme?

Posted by puppymeat at 9:45 AM