San Francisco's newest festival of fantastic film officially kicked off last night in style. I, of course, was there front row for all three movies. They didn't wast any time, so neither will I, here we go:

First up was an ultra-rare 35 mm print (possibly the only one in existence) of Kurt Vonnegut Jr's "Happy Birthday, Wanda June" from 1971. It's Vonnegut's hilarious riff on the nature of death and killing (I guess appropriately, he died just earlier this year). Rod Steiger chews up the sets as manly adventurer Harold Ryan, missing in the Amazon for 8 years with his friend/pilot/Nagasaki bomber Looseleaf Harper (William Hickey). Susannah York plays his wife (presumed widow) Penelope, who has finally gotten over his presumed death and is being courted by two men--manly man wannabe and vacuum salesman Herb Shuttle (Don Murray) and pacifist allegedly gay Dr. Norbert Woodley (George Grizzard). Meanwhile her son Paul (Steven Paul) hates both suitors and believes daddy will come home any day now. And when he does, all hell breaks loose. Meanwhile, Wanda June looks down on it all from heaven, where apparently anyone can get in, and Hitler plays shuffleboard with Jesus. Wanda gives sage advice from her privileged position, like killing people is the nicest thing to do to them because heaven is so much fun! Meanwhile there's tons of quotable lines, mostly from Rod Steiger. My personal favorite was "Giving a beautiful woman an education is like pouring honey on a Swiss watch--everything stops!" Interestingly, right after the movie I figured I was a horrible person because the only character I sympathized with was Harold Ryan. You're supposed to hate him, but everyone else is such a goddamn pussy he was the only one I connected with. But after sleeping on it, I realize I actually sympathize with Looseleaf more. His constant, "Oh geeze, I dunno..." is infuriating at first, but on further review it's the most honest answer a rational man can give to questions of life and death. And his epiphany that he should've had the spine to not drop the bomb on Nagasaki is now for me the key to the movie. Although I suspect on future viewings that might change. Too bad that's practically impossible, as it's not playing again in the festival and it's never been on video or DVD. I'll have to make due with reading the book, I guess. Oddly, although I love Vonnegut, this is one of his books that I've never read.

Next up was a boys-in-prison movie, "Big Bang Love, Juvenile A" from Japan's incredibly prolific bad-boy auteur Takashi Miike. It's weird for me to say this about a Miike film, but I still don't know what to make of it. And I say that's weird because really there's a part of me that should say that about every Miike film. But this is the first one where I really didn't know how to react. Jun Ariyoshi and Shiro Kazuki are sent to an all boys prison on the same day sometime in the unspecified future. Kazuki gets in fights with everyone, Ariyoshi is mostly quiet. Sometime later Kazuki is strangled, ostensibly by Ariyoshi, who is found with his hands around Kazuki's throat and confesses to the murder. However, closer inspection reveals that he was strangled not by hand, but by some sort of wire. So an investigation is launched to find the real killer (even the warden is suspect, as Kazuki was in jail for raping the warden's wife). It jumps around in time and there's something about a giant pyramid and a rocket ship. There's still Miike's grand visual sensibility, but again I don't really know what to make of it beyond a meditation on homosexuality, love, jealousy, revenge, time, and astronomy.

And finally, the highlight of the night, the US premiere of the breaks-all-taboos comedy "Postal" from infamous director Uwe Boll (who was in attendance with much of the cast). I'm not even going to qualify it by saying it's good for a Uwe Boll movie, it's just good, period. Apparently fuck-the-world angry comedy is Boll's genre. He specifically said before the movie that he made it because he was angry at the world situation (especially the war in Iraq), his critics, and himself personally. So he made a movie that starts with a 9/11 joke and gets more offensive from there. The story in a nutshell is that Postal Dude has a bad day, teams up with his uncle Dave (Foley of "Kids in the Hall") to rob a warehouse of ultra-popular Krotchy dolls (stuffed phallic characters voiced by Vern Troyer). Problem is, Osama Bin Laden (who in this movie is a good friend of George W. Bush) is also after those dolls to spread avian flu over America. But really, the plot is just there to show horrible, despicable people doing horrible, despicable, hilarious things, like shooting children, exploiting the retarded, or locking Vern Troyer in a room full of 1,000 horny monkeys. Uwe himself makes a cameo as himself, admitting that his movies are financed by Nazi gold before punching out the creator of the "Postal" video game.

I feel like I haven't done this review justice, but I'm struggling with not giving away spoilers. Just believe me that this is hardcore offensive hilarious. I already can't wait to see the extended cut on DVD. This has a limited theatrical release on October 12. Please, ignore the fact that you hate Uwe Boll and give this a chance, because dammit I want this to be so popular they make a sequel so I can see what Boll would do if he had to top this. And hell, at the after party I got to shake Osama Bin Laden's hand and tell him I loved his work.

Oh yeah, one thing. I could've done without the scene of Dave Foley's penis, but what can you do about that? I still laughed. 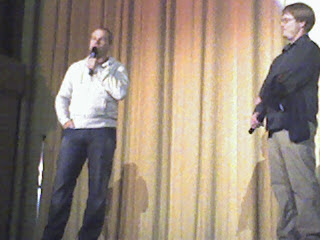 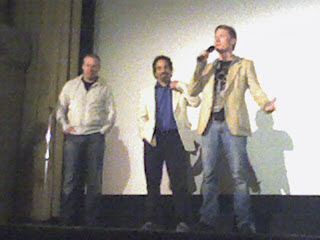