Aka deadly cock-fest. More on that later, but I've identified the first theme, and my favorite theme ever.

A marathon day, 6 movies, so you should start to see these reviews get really rambling and incoherent (and the spelling errors should increase).

First up was the 1953 version of "War of the Worlds". I'll go ahead and assume everyone already knows the story of Martians attacking Earth and briefly dominating man before they succumb to simple Earth bacteria. Well, this telling sticks to the story pretty faithfully (although putting it in southern California instead of England, but since the premise is that this is happening worldwide, that's completely fair). But it takes the story in a religion vs. science direction as scientists from Pacific Tech try to fight back only to fail. The Martians finally succumb coincidentally right after they attack a church, and the lead scientist gets the girl and presumably religion, too. It's very much a product of it's time, but lest you think it just thumps the Bible at you, they also had no qualms about vaporizing a priest. All in all, this was really cool to see on the big screen, even with (especially with) the height of cheesy 50's special effects.

Next up we moved from the 50's to the 70's with "Welcome Home Brother Charles" aka "Soul Vengeance". Director Jamaa Fanaka (the "Penitentiary" movies) made this as his second student movie. When most students turned in something 10 minutes long, he made a 1 hour 45 minute feature about black rage. Jamaa was there for the screening, and he's a hell of a character. In his hilarious intro he talked about the myth of black men's sexual apparatus, how rumors of its size were started by white men during slavery to frighten women, and how that totally backfired. And he claims he made this movie to burst that myth, although for my money he exploits it to the hilt, as it were. Charles is a dope peddler who is arrested by a racist cop who tries to castrate him. 3 years later, he's released and trying to clean up his life. But he's still tormented by the abuse from the cop, the cop's partner, the judge, the DA, basically all the white characters. So during the day he stops by their houses to seduce their wives and turn them into his zombie slaves. Then he makes them let him in at night so he can strangle whitey with his 15 foot prehensile penis. Awesome, just fucking awesome!

Jamaa also sold me a DVD of this movie and "Penitentiary" signed "Peace, love and much success", but he told me he really meant "Peace, love, and much pussy". Jamaa is awesome! Here's a picture of the awesome Jamaa Fanaka: 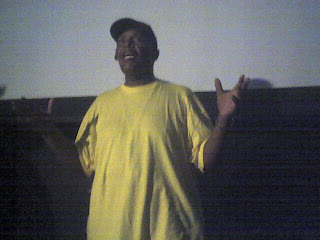 Next up was the second shorts program, "Short and Really Scary", the shorts that go a little further than the "Short and Scary" ones. Here they are.
"Rhyme Animal"--Hip hop cannibalism from Shiva himself.
"Red Harvest"--Pot running teens run over a kid, then run into some demons.
"Anonymity"--Plays like a clip from a longer movie, a woman tries to save her boyfriend from a really, really cruel sadist. Well done, but I want the feature length movie.
"Criticized"--I saw this at Cinequest and reviewed it here (near the bottom). I stand by that review, as ridiculous as it was, and I'll add that it contains possibly the best eye abuse I've ever seen. I love this movie and director Richard Gale said he's trying to turn it into a feature. I hope he's successful.
"Meter Maid Me Massacre"--crazy fucked-up kung-fu zombie splatstick comedy about the evils of San Francisco meter maid demons. 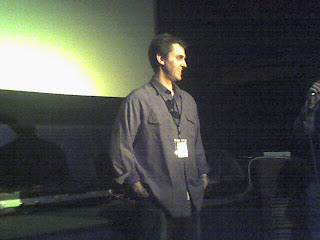 And here are Dylan Griffith, director of "Red Harvest" and Cecil B. Feeder, the maniac responsible for "Meter Maid Me Massacre" 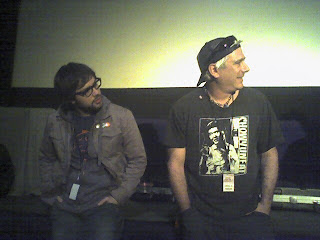 Next up was "The Living and the Dead" which I saw twice at Holehead and reviewed here. I'll stand by that review, but just add that on a third screening, I'm still seeing more interpretations. Oddly, this time I embraced the most straight-forward reading possible. I also on a whim was given a chance to introduce the movie, which was cool. And it was preceded by director Simon Rumley's newest short film, "Handyman". A widow lives in a secluded farmhouse, and hires a charming, attractive man to help out around the house. Problem is, he might hold a horrible secret, like being a serial killer. Simon Rumley once again shows a great eye behind the camera and a stark sense of beauty. He's quickly becoming one of the most fascinating filmmakers in my mind.

And next was a forgotten film from someone who's already one of my favorite directors, David Cronenberg's "Crimes of the Future". About ten years ago I went on a Cronenberg kick and saw what I thought were all his movies. Turned out I missed this, "Stereo" and "Fast Company". Now I've not only seen "Crimes of the Future", I've seen it in a way that possibly no other audience ever will. In the original "Crimes of the Future" the soundtrack was a bunch of pops and squeaks with narration by the main character, Adrian Tripod. But Dead Channels presented it with a new soundtrack by the synthesizer duet Spoonbender 1.1.1, which was awesome. The movie itself is pure hardcore Cronenberg. Adrian Tripod runs a medical institution founded by Antoine Rouge, a mad doctor most (in)famous for a condition in which victims excrete mysterious white foam which is tasty but eventually kills them. Adrian is his trenchcoated disciple, lording over the institute and the handful of bizarre patients (including a guy who grows new organs with no discernible purpose). The methods of the institution are suspect, such as massaging feet in hopes that they'll reverse-evolve back into fins or tentacles. But more questionable is the international conspiracy of pedophiles that's somehow linked to all of this. Yeah, it's a freakin' mind trip. I liked it, but when it came to rating it on a scale of 1 to 10, I wanted to give it an imaginary number, like 8i. 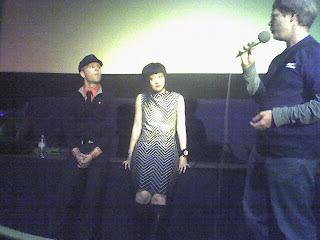 And finally the midnight movie, "The Secret Life of Sarah Sheldon", featured the second deadly penis of the day (and third in the festival, if you count the Krotchy dolls from "Postal"). The premise is actually quite logical: overpopulation is a problem, specifically too much breeding by stupid people. Stupid people are more likely to have casual, unprotected sex, so if you come up with a way for casual sex to result in sterilization instead of pregnancy. That's Sarah Sheldon's life work, developing implants that will do just that. Trouble develops when the male implant mounted on her friend Alex malfunctions, grows fangs, and kills a girl instead of just sterilizing her. It also tends to bite Alex on the inner thighs, which is annoying and painful. So it has to be removed--with gardening shears. Oh yeah, a penis monster and a de-phallusing in the same movie, I'm in heaven. Anyway, then it gets kinda weird. Oh yeah, Sarah's not a real doctor, she was kicked out of med school for playing with the cadavers. I should also mention that it was projected very dark in the theater, so a lot of the detail was obscured. Luckily director Annette Ashlie Slomka gave me a DVD so I can see a clearer version of it. That won't be until after the festival, but if I have anything to add after that I'll post it then. But I wanted to post a review up while I could still encourage everyone to see the second screening this Tuesday at 9:30.

Posted by puppymeat at 5:32 AM