First up was the quietly understated and unsettling "Disquiet". So many movies at these kinds of genre festivals are about making fans yell "Woooo" throughout, but this is the exact opposite. Several times I was afraid to breath for fear of making a sound that would break the tension (unfortunately, I've started developing a bit of a nagging cough, probably from too little sleep and too much beer). This is a movie that's not about monsters, psychos, or any of the standard genre spooks, this is about the fear of yourself (or at least, it spoke to me of fear of myself, so if I missed the point then I'm really fucked up). Darren works as a computer expert for a used car dealership and tries writing novels. He's also trapped in a cycle of routine, except for his "project", which involves secretly observing and recording his co-worker and his family. See, the big problem he has with writing is he doesn't understand human behavior. To him, people are like fish in an aquarium, moving about with no apparent motivation. Enter Mason (director Matthew Doyle), a new salesman at the dealership who takes an interest in Darren, his writing, and his project. They are developing quite a friendship, until Mason tries to kiss Darren. Darren pushes him away, and goes forward with his project, crossing a line from voyeurism to violation in an excruciating extended climactic shot. I don't want to give anything away, but I'll just say that everything in the scene is creepy an unsettling, even his decision to stop can be read in an unsettling way. Now my regular readers or people who've seen me at the movies know I nearly always sit front row center. I just want to say that there's something about sitting in the front row that's more intimate--there are no boundaries between me and the movie when I sit in the front row. For better or worse, this is a movie where I believe that greatly enhances the experience. Here's a picture of director Matthew Doyle: 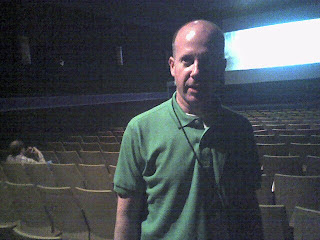 Then it was time for the sleazy Sunday program with the legendary Jack Hill (I shook his hand!!!). First up was his classic first feature, "Spider Baby". What can I say that hasn't been said already? Probably nothing. It's a crazy-family-kills-the-visitors story (premised by a family-specific disease that causes people to revert to pre-human cannibalistic urges as they age), but it's also so much more than that. It's a brilliant twisted comedy (the whole spider game cracks me up) and it's a showcase of fantastic acting, from Sid Haig as the retarded brother to Lon Chaney Jr's final role as the family's loyal chauffeur. And it was an absolute treat to see it on the big screen.

Next up was another treat, a very rare screening of a gorgeous print of "Pit Stop" aka "Winner", Jack Hill's forgotten classic muscle car race movie (which I had never seen). Jack Hill introduced it by saying that he wanted to make an art movie about car racing, he wanted to make the artsy choice to have the hero lose the big race. Roger Corman (who financed but didn't distribute the movie) nixed that idea, so he made it so the hero won the race, but lost his soul, which is a brilliant touch. Shot semi-guerrilla style and becoming as much a documentary on extreme racing, it follows the story of Rick Bowman (Richard Davalos) as he makes the leap from small time street drag racing to the insane figure-eight racetrack, where Sid Haig as "the Hawk" is the dominant and domineering force (because, as he explains, he's the "dingy-est" guy out there, so everyone gets out of his way) and ultimately to the big event at the Phoenix International. At first he's aggressive but naive, but success corrupts his morals (but not his aggression). It's crammed full with insane racing and wild crashes all throughout, and the final, tragic race doesn't disappoint. One final point, a muscle car is basically a surrogate phallus, so on a philosophical level this is another deadly cock movie. Deadly cock-fest reigns supreme!

Here's a picture of the legend, Jack Hill himself. It was exciting enough hearing him speak just feet away from me, much less shake his hand: 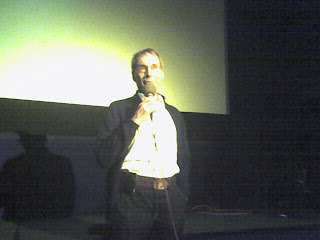 Next up was a Japanese kids monster flick, "Gamera the Brave". Gamera is a giant turtle monster, defender of children, and the hero of a number of movies, none of which I've actually seen (sorry, I have bad gaps in my Japanese monster movie knowledge). Anyway, this is the origin story, where Toru, a little boy, finds a mysterious egg out of which hatches a cute turtle he names Toto. Toto grows quickly, starts flying, and starts shooting fireballs from his mouth. Still, he's Toru's beloved pet, so when Zedus, a spiky monster who shoots his projectile tongue, attacks and young Toto/Gamera faces him, Toru feels he must help, even against the orders of his father. The seen where all the children relay the magic glowing red stone, the source of Gamera's power, to him is so beautiful it actually made me tear up a bit. Now I want my own pet turtle who can fly and spit fire. I'm sure if I don't overfeed him he won't get too big. Oh yeah, and Zedus' projectile tongue kinda looks like...no, I guess not everything is a deadly dick flick. Sometimes a giant deadly pink projectile tongue is just a giant deadly pink projectile tongue.

And the final movie of the weekend was "Fingerprints", based on a Texan urban legend. 50 years ago, a busload of schoolchildren died when they were hit by a train. Legend has it if you stop your car on the tracks and leave it in neutral, the ghosts of the children will push it to safety (and leave the titular fingerprints on your car). Melanie (Leah Pipes) has just moved there with her family after getting out of rehab. Her near-fatal overdose on heroin has left her seeing visions of ghosts, and she gets involved with the mystery of the train crash, the children, and the dark town secret. I'll give it credit for being well made, but the end product is formulaic and cliched. I can't point to anything specifically wrong with it, I'm just left with the feeling that I've seen that story many times before. Director Harry Basil has some skill, although looking him up on IMDb I see he started with direct-to-video Rodney Dangerfield comedies and this is his second horror film (his third horror film, "Urban Decay" is supposed to be out this year). He certainly has the technical chops to make something good, so here's hoping he has a really original story to work with some time.

And that's the Dead Channels weekend. A couple more shows tonight, including the Hypnodrome's "Spookshow Salute". There's also a mystery screening from the Cosmic Hex vault's at 3 pm, and a little birdy told me what it is but I can't tell you.
Posted by puppymeat at 1:47 AM

I've been a little disappointed so far. I've seen 5 films; I recommend one, one was a near miss, and I pan the other three which I suppose is a good percentage because Hole in the Head & IndieFest show a lot of crap that should never be shown to paying audiences.

Pit Stop is a true gem. It was quite a treat to see that one on the big screen. Spider Baby wasn't that funny and hasn't held up too well with time. I'd like to have that 2 hours of my Sunday afternoon back. I wouldn't recommend it. (That wasn't Lon Chaney Jr's final role either).

I don't think Freesia is at the same level as Antenna & Green Mind, Metal Bats but still worthwhile. Welcome Home Brother Charles had a few moments but the sound quality was horrible and it looked like a student film. There were several portions of the film that I couldn't understand what was being said. The film was done on the cheap which explains part of it but the Little Roxie needs to soundproof their projection room. Finally, Welcome Home Wanda June looked like a play that hadn't been fully adapted for film. The actors' dialogue seemed forced and unnatural. If you want to turn people on to Kurt Vonnegut, steer them away from this film. Has there ever been a worthy film adaptation of one of his works? Can his novels be adapted to film?

On the short list for the final five films are Disquiet, Secret Life of Sarah Sheldon, 4th Dimension, Jupiter Love, Hot Baby & Short and Really Scary. I might buy a ticket for Trapped Ashes if I'm not too burnt out by Thursday evening.

The correct title of the Vonnegut film is "Happy Birthday Wanda June." I was transposing the title with Jamaa Fanaka's film.

Always good to hear your opinions, Dan, even when we usually disagree.

You're right, according to IMDb that "Spider Baby" wasn't Lon Chaney's final role, Jack Hill was mistaken. He also said that Lon Chaney died before he saw how popular it was. Now I don't know if that's true, either. In any case, I actually liked "Spider Baby" more than "Pit Stop", and think the humor still works.

I haven't seen "Freesia" yet.

You're right that "Welcome Home Brother Charles" is a student film. It was his second student film, the project where most students turn in a 10 minute short, he turned in a 105 minute feature. I'm not saying it can't be edited down, but I think the payoff is still pretty brilliant.

Good point about soundproofing the little Roxie. Someone was hammering next door during "Fingerprints", it was very annoying.

"Happy Birthday Wanda June" was a play, written directly for the stage by Vonnegut, and I loved the film although you're right that it didn't really expand from it's stage roots (not that I think it needed to). But you're right that it's been pretty disappointing seeing his work adapted. A lot of what he puts on the page is very different when you hear people say it. Still, I'd love to see a movie version of "Cat's Cradle", just to see the ending.