I missed the 3 pm show again, will probably miss this afternoon's (although they're both already on my Netflix queue). So just 3 movies last night, and here they are:

First up was "Jupiter Love", a kinetic, apocalyptic (theme alert!), ultra-low budget two-person video from Australia about the extinction of the male race. Chromosome X (Nikka Kalashnikova) is an artist who is on her way to her exhibition. She specializes in deformed representations of the female body, but lately she's lost her inspiration. On the road, she's approached by Chromosome Y (Michael Andre) who drives up alongside her and starts videotaping her while mouthing "I love you!" She responds by teasing him, which drives him into a rage. She escapes, and this reinvigorates her artistic passions. On the road with new video, she runs into him again (literally, Andre is a stuntman as well as an actor). Their battle continues as a crazed road trip down the darkest parts of the battle of the sexes. Some people I talked to afterwards criticized it as being misogynistic. Personally, I think it's completely misanthropic, and there's more misandry than misogyny. Ultimately, it defines both sexes in terms of disease, and points to a future where at least the virus of the Y chromosome is eliminated. And it puts that out possibly as a brighter future. Truly insane, and truly an indie no-budget gem which proves you don't need money to put insanity on screen. Andre and Kalashnikova are the only two actors, and they only two camera operators. He did all his stunts, including driving. Her brother filled in as her stunt driver. Her dad financed the whole thing. And I assume the cows and the kangaroo (uncredited) were just a happy coincidence.
Next up was the first real big budget film from long-time Indiefest and Holehead friend Kazuyoshi Kumakiri ("Antenna", "Kichiku Dai Enkai", "Green Minds, Metal Bats"). "Freesia: Icy Tears" aka "Freesia: Bullets Over Tears" is a quintessentially Japanese (or at least quintessentially Kumakiri-san) near future sci-fi thriller based on a best-selling manga story. In the near future, the government has passed a law declaring victims have the right to get revenge on criminals. At a certain pre-appointed time, the victim is allowed a "vengeance execution". The victim is allowed to hire professional killers, and the condemned is allowed to hire bodyguards, which turns the whole thing into a bizarre game. Civilians are supposed to evacuate the local and/or stay indoors, but of course there are big crowds shoving their way in to try to get a peek. The hero of the story is a professional vengeance killer, who is unable to feel either physical or emotional pain due to his past military duty involving a "freeze bomb". In a deplorable experiment, the military used orphans as test subjects, freezing to death all but one little girl, who survived but is also left physically and emotionally numb as a result. Now she's grown up, is in charge of the vengeance killer agency. Now the men responsible for the freeze bomb experiment are being brought to justice, and our hero and heroine have a chance to do their job and enact personal revenge--that is, if they could feel anything about it. It's definitely Kumakiri's most polished work, but it still retains the demented and inventive energy of his previous works. It looks like this is one of those moments when one of my beloved cult directors is making a leap to a wider audience. Those are a little bittersweet, because he's no longer my secret, but I welcome his new fans into the fold, and invite them to go rent his first movie, "Kichiku Dai Enkai", perhaps the nastiest movie I've ever seen.
And finally, the world premiere of locally made (although shot in New York) feature debut from Jeff Roenning, "Hot Baby!" (and yes, that exclamation point is in the title). It's the story of a geeky teenager name Jim (Adam Scarimbolo), his domineering father Tex (Greg Travis, hilariously stealing every scene he's in), the mystery surrounding his missing mother, and all his horny friends. After a particularly unpleasant encounter with Tex, and some amount of urging by his girlfriend (Emily Grace, who is hot), Jim leaves home to search for his mother. He and his friends find a supposedly abandoned (buy mysteriously tidy) town, decide to get high and have a party, and fucked-up hijinx ensue, including a little "Porky's" inspired penis severing (interestingly enough, "The Secret Life of Sarah Sheldon" was having its second screening next door. I don't know of any other time that two cock-slicing films were playing simultaneously so close together). The movie's definitely low-budget, and some of the acting in the lesser roles is uneven. It's not a polished production, but it more than makes up for it by having generous doses of my sense of humor. Here's a picture of the sick bastard who created it all, Jeff Roenning: 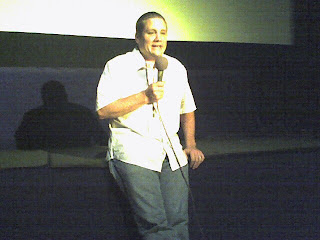 And that was my night. I was going to go to the after party at the Cat Club, which involved taking the BART one stop over. But it was running late enough that I'd barely have time to run to the bar, get one drink (if the bar wasn't crowded), drink quickly, and run back to BART. So I decided to skip it and have a semi-early night. Even that plan was foiled when the train stopped for 15 minutes just before it got to Union City. Turns out there was an earthquake reported, and they had to wait for confirmation from the dispatcher before continuing. So I still got home really late, and I'm still working on very little sleep. Oh well, 3 more movies coming up tonight: "Nuit Noire", "The 4th Dimension", and "The District!". We're on the final stretch now.
Posted by puppymeat at 10:24 AM