Okay, 5 more movies yesterday, I'm on the bus home, let's do this:

First up was a political movie disguised as a screwball comedy, introduced as a companion piece to "Postal", "World Sinks (Except Japan)". Directed by Minoru Kawasaki, who made one of my silly favorites in "Calamari Wrestler", and I'm told based on a book that's a parody of a recent disaster movie, "The Sinking of Japan", I had high hopes for this movie. Unfortunately, despite the great premise it's delivered with no energy. The idea is through rapid plate tectonic acts, first America sinks, then the rest of the world until all the survivors are crammed onto Japan. Japan quickly becomes jingoistic and xenophobic, and the idea of a bar where all the former world leaders hang out and drink is pretty cool. It's just, as I said, delivered with no energy. People ramble about the politics instead of getting worked up, and maybe that's the point that I missed. I just expected better from the team behind "Calamari Wrestler". That movie wasn't expertly made, but at least it had life (and is actually one of my favorites, in large part for the cheesiness). I can forgive that the 'American' wife of a Japanese man speaks with an accent. But when she'd rather be deported with the famous American actor rather than stay with her husband and I don't feel like she cares that much, this movie has lost me.

Next up was the shorts program "Short & Scary", let's do this quickly:
"The Listening Dead"--Brilliant visuals resurrecting and reinventing/subverting black and white silent films to tell the story of a man who'd rather write his music than talk to his wife, and the voodoo vengeance they take on each other. I loved this, and not just because I've drunk with director Phil Mucci the last couple of nights. In any case, here he is: 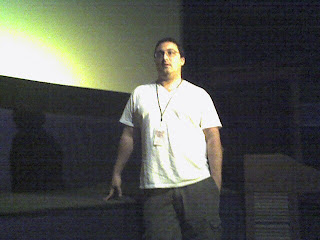 "Lump"--the fear of medical problems, specifically breast cancer and surgical treachery.
"Happy Birthday 2 You"--A social worker investigates an allegedly abused child. I could swear I've seen this before...and I did, at Cinequest, I just reviewed it by it's Spanish name, "Y Que Cumplas Muchos Mas".
"Akai"--nearly silent Brazilian film about a vampire and the escorts he calls and kills who always look the same. Or it's a story of a guy having some bad hallucinations and cravings. Either way, the cinematography is awesome but it drags. It should've been about half as long.
"In the Wall"-- saw it at Holehead and reviewed it here, but I didn't realize when I reviewed it that it's by the guy who did "The Silvergleam Whistle". Now he's done two shorts that I think could work as features.

Next up was "The Trail of the Screaming Forehead" by Larry Blamire, who directed "The Lost Skeleton of Cadavra" which is another of my silly favorites. He moves up to color here, but still keeps the same sensibility in telling the story of alien forehead creatures trying to take over earth, and the salty sea dogs, the librarian, and the scientists at the Institute for Brain Studying who stop them. Basically, if you liked "Skeleton", you'll be on board and like this. I loved it, and laughed my ass off. For a filmmaker who has specialized in intentionally awkwardly constructed dialogue, he has raised the bar for awkward sentence construction higher than the height to which an awkwardly constructed sentence has ever had its bar raised. If you laughed at that, you're one of us.

Then there was "End of the Line", my hands down favorite of the festival so far (although there's still lots to see). In the simplest explication, it's a zombie flick with religious fanatics as zombies (which means my atheist sentiments were all a-twitter). It's also a nasty, bloody gorefest. A young psychiatric nurse has had a bad day, and is trying to catch the subway home. She's approached by a creepy guy, but saved by a nice guy and soon gets on the train home. But very quickly the train stops, there's a garbled message from the conductor, and several passengers' cell phones ring. They're all members of the Church of the Voice of Hope, and their reverend is telling them that the end is here and they should save all the souls they can. However, their method of "saving" souls involves stabbing them until they're is heaven. A small group of non-believers try to survive. But it's not just a good premise, the execution is also terrific, very quickly making me jump more than a few times. And I'm pretty jaded, so I don't admit that often. But to director Maurice Devereaux and his crew, my kudos!

And finally, the midnight movie "Don't Be Afraid of the Dark". I didn't see this when it was first on TV, mainly because I was -1 years old. And I've missed it anytime it was replayed, but apparently it fucked up a generation including Bruce and now he found a rare 16 mm print to show us. A married couple move into her family's old Victorian house and start fixing it up. There's a room they're advised to avoid a certain room, her father's study, and especially the fireplace that's been bricked up 4 bricks deep with reinforced steel rebar. Unfortunately, the ash trap is easier to open, and she ends up releasing gorilla-suited raisin-headed midget demons. Or maybe she's going nuts. No I think she released demons. Pretty cool, even though I'm not really the target generation (but maybe I'm close to it).

Thanks for the kind words, Jason. Wish I could be there for the whole fest, but duty calls. Send me an email at phil@thehivefilms.com so I can put you on our mailing list about current events and film releases. Thanks for a great time!-Phil