And my lightest day of the festival. One shorts program, one Hypnodrome show, and I was actually home and in bed before midnight.

I also have to confess failure. I finally missed a Dead Channels screening. I couldn't make it up for the 3 pm secret free screening. I do, however, know what it was, I've seen it before, and it's recently become available on DVD (and that's all I can say). I'm sorry I missed it, but I'm not letting that slow me down. On to the movies!
First up was a series of 3 shorts and a 45 minute feature-ette. Here we go:
"Ambassadors Day" is a cool post-apocalyptic (by the way, apocalypse or post-apocalypse is another theme of the festival) story of humanity, friendship, and duty. The earth is unsafe for humans unless they wear gas masks. Two ambassadors meet on a deserted plain for official (and intentional obscure and tedious) protocol exchange. Too bad the floating eyeball who controls one of them has ideas far beyond diplomacy. "Dispense with Contents!" Cool film, and here's a picture of direction David Kellum: 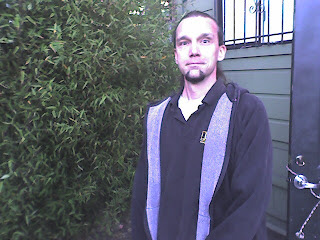 "The Grandfather Paradox"--A college professor of temporal mechanics explains the time-travel paradox of killing your grandfather before he reproduces. His grandson appears and tries to kill him. His class becomes much more popular after that.
"The Pit and the Pendulum"--Ray Harryhausen produces a claymation version of Poe's classic story. It stays pretty faithful to the story, but is a little quick. It's so beautiful, I wanted it to slow down and take longer.
And finally, the feature-ette "Belleville Book of the Dead". Michel is approaching 40, has a pretty normal life but is very attached to his mother. When she dies, he expects that's the last he'll ever see of her. Then one day, he sees her up and about in the neighborhood of Belleville (which she never much cared for when alive). She's as active and talkative as ever, and it turns out there's a huge community of dead people out there, including his ex-girlfriend. It's not scary, it's just very French (although transplanted from an English story by Will Self), humorous, and intriguing--especially Michel going to a party of the dead and being the outsider.
Then I went over to the Hypnodrome for their Spookshow Salute. Sadly guest Dick Newton, who started out in spook shows when he was 19, couldn't make it for medical reasons. We're all wishing you well, Mr. Newton.
But the show must go on, and Thrillpeddler shows are always fun. There was a Jack Chick tract exposing the dangers of D&D. The Creepshow campers (the Thrillpeddlers summer camp for kids) put on a gypsy spookshow (and the lights out thrills were well done). There was a sing-along to "Bohemian Rhapsody" on their classic player piano (not one of those new computerized ones, this has actually punched hole reels, and there's one for "Bohemian Rhapsody"). And to top it all off, the Boris Karloff/Bela Lugosi pre-Hays code classic "Black Cat". It has nothing to do with the Poe story. An American couple honeymoons in Hungary, where they meet Bela Lugosi on the train. When their bus overturns, they have to take refuge at Boris Karloff's house. Karloff is a satanic priest with designs on them, and Bela Lugosi is his old adversary trying to protect them, although even he's so creepy that they don't trust him, either. Pretty cool, even with the audio cutting out a bit in the first reel. By that time we were all so drunk on thrills (and in my case, beer) that we just made up our own dialogue.
And that was Monday at Dead Channels. Three more movies tonight, as I once again can't leave work early enough to catch the 3 pm secret screening (and I know what it is, and it's available on DVD although I'd love to see it on the big screen since I've never seen it before).
Posted by puppymeat at 7:58 AM

Thanks for the kind words and the beer! -Dave Kellum