As I explained in my previous post, I saw "The Prodigy" two years ago at Another Hole in the Head festival. Now Dead Channels is promoting a 1-week theatrical run, in advance of the DVD release. This is a slightly new cut from what I saw before (deleted scenes and director's commentary are on the DVD). Without rehashing everything, here's my impression the second time around:

First, the two parts that bugged me before: 1) Nobody gets the Claude Rains reference. That's explained quicker, so I only have to wonder why a half-dozen gangsters don't know Claude Rains played the invisible man. Once you meet Ash (the hacker chick, played by Diana Lee Inosanto), she immediately explains the reference and mocks Truman for not getting it. 2) the scene where Ash watches Claude Rains sneak up on her via a webcam on his site. Actually, I don't know if that's changed or if I just knew it was coming, but it didn't bug me this time.

Other things I've noticed. This version is 7 minutes shorter, but plays much tighter. I fully approve of the new running time. As far as the violence, I noticed more how important the sound was to making the punches believable. The Dolby 5.1 mix on the DVD should be even better, if only I had a great sound system to play it on (must upgrade my home theater experience, but I'm too busy going out to the theater). No surprise, sound designer/editor Russel White was there and explained that for the foley sessions, he and Holt Boggs (Truman) actually hit each other. Finally, I saw it more as a father/son story. Truman became a fighter because of his father, now Claude Rains is becoming a new (and equally crappy) father figure. I also picked up more on the friendship between Truman and his gang partner Pat Doyle (Matt Beckham, also co-writer with Holt and director William Kaufman)

So bottom line is, it was even better than I remember it, whether that's from the new cut or just because of my memory. All my San Francisco readers, catch it at the Roxie before it leaves Thursday. And to my readers anywhere, catch it on DVD, coming soon.

Afterwards, there was a brief Q&A and goodie handout, where I got a DVD and a t-shirt. Then we all went to the bar (Delirium, just up the block from the Roxie). And since an anonymous poster asked, I don't remember what William Kaufman was drinking. People were drinking beer (in my case Sierra Nevada) or mixed drinks, looked like whiskey and soda. I believe William might have been in the latter group. 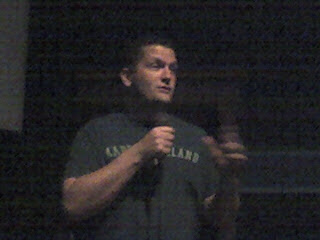 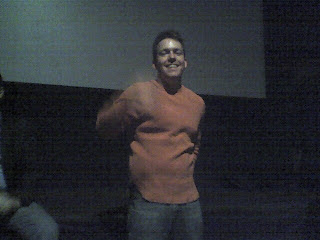 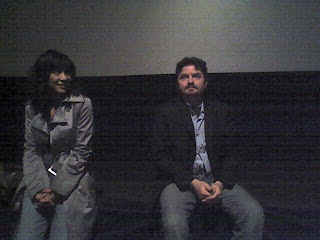