Easy night yesterday, just two movies, so let's jump right in. First up was "Broken English" starring Parker Posey. It's a not-very-romantic romantic comedy (for that matter, although it was funny, it really plays more like real life than the guided laughter of a regular comedy). Parker Posey is a natural as Nora, a mid-30's single woman with a good job as a hospitality manager of an upscale hotel. Although she's successful, that "single" label gives her problems. She's supposed to be married and have children (or at least a plan to have children) by now, as everyone reminds her. Instead she makes her way through one disastrous date after another, in a haze of alcohol and pills. For the first 20 minutes or so, it was actually kind of annoying just watching the self-indulgent pettiness of the depression of a successful, upper-middle class woman. There's a part of me that wanted to scream out, "Get over yourself! Stop worrying about what you're supposed to be by now, and just be cool with who you are!" Luckily, the movie somehow heard my thoughts and eventually went that direction. In a moment of desperation, she goes to her nerdy co-workers party, where she meets Julian, a charming (although at first kinda sleazy) Frenchman who she ends up seeing for a few days, until he has to return to Paris. Finally, on a whim she goes to Paris with her girlfriend Audrey to try and find him, then promptly loses his phone number, so instead spends the time in Paris finding herself. Funny and real, with some excellent acting by not just Parker Posey but the whole cast (including Gena Rowlands, director Zoe Cassavetes's real mother, playing Parker Posey's mother). Very well done. Here's a pretty blurry, washed-out pic of Parker Posey and Zoe Cassavetes walking up on stage for the Q&A afterwards: 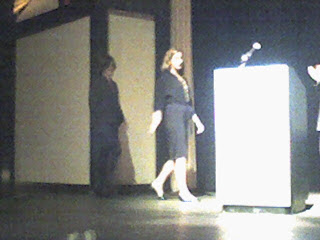 By the way, they were both very charming in person (and Zoe Cassavetes mentioned she didn't think of the movie as a romantic comedy, so that justifies my comments in the beginning saying it's not that romantic nor is it strictly a comedy)

Then I caught a Malaysian movie, "Mukhsin". Apparently the third (and a prequel) in the trilogy of Orked, a Malaysian Muslim woman based somewhat on director Yasmin Ahmad. In this one she's a 10 year old tomboy. Orked's relaxed, easy-going, English-speaking family (her mother was educated abroad) works well, despite the scorn of the more traditional neighbors. And Orked is growing into a strong, self-reliant young girl who is smart and strong enough to confront bullies. Mukhsin is a twelve year old boy from a much less functional family. His mother has run away from his abusive father, and his older brother is a drunk. So, of course, he prefers Orked and her much cooler family, and they become good friends. It's a story of young friendship, young love, and how the latter can threaten the former. All in a lyrical, poetic, sweet package.

And that was the end of Monday. Two more movies on Tuesday.
Posted by puppymeat at 9:02 AM