I don't know how many days it's been now. I think 11? Anyway, this is last Sunday, May 6th, 2007, and quite possibly my best total day at the festival this year.

After my 7 movie marathon on Saturday, I was up again bright and early at 10 am for a free breakfast (bagels and coffee) and a secret members-only screening. No one knew what the movie was going to be, and it turned out to be Lars Von Trier's latest film, "The Boss of it All". An intentionally trifling comedy from Denmark's premiere cinematic practical joker. He even introduces it with a voiceover and a reflection of his camera in a window, explaining that while you can see his reflection, you shouldn't reflect on the movie, you should go ahead and forget it when it's done. Well, from what I can remember, it's about an actor who is hired to play the boss of an IT company. You see, the company owner is a sort of ruthless businessman, whose lawyering skills are to be feared. However, he's desperate to be liked by his employees, so for years he's been posing as the company lawyer who reports to the boss of it all who's back in America. However, he has a great deal to sell to an Icelandic company (which will make him rich but put all his employees out of work) but the Icelandic boss won't deal with anyone but the Danish boss. So he hires an actor to play the boss of it all (i.e., a patsy), and of course wacky hijinx ensue as the actor finds out that he's alternately hated or loved (or even lusted after) by his various "employees". He also comically knows nothing about their business. An entertaining trifle, in some ways more fun that Lars Von Trier's "important" movies. Even his more serious movies have a huge degree of playful practical joking in them, so it's actually a bit refreshing to see him make a movie that's intentionally nothing more than a joke.

Well, then I ran up to the Clay theater, but that's the last time I ran that day since I just stayed at the Clay all day. First up was "Vitus", which director Fredi Murer (pictured below) described as the opposite of autobiographical. As opposed to his life, it's a movie about a genius little boy who wishes he were normal. The title character a chess master, amortizes interest in his head, and most of all is a piano prodigy. His parents (especially his mother) put a lot of pressure on him to nurture his gift, even planning to send him away to a conservatory. His only escape is spending time with his wonderfully eccentric grandfather (the excellent veteran actor Bruno Ganz). That is, until he comes up with a better escape--jump out of a window and give himself brain damage. Okay, despite how that sounds, it really is a very sweet movie, very funny, and has more surprises than I am willing to give away. 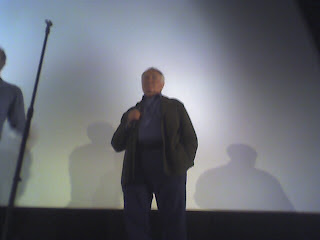 Next up was a Czech comedy, "Grandhotel", a story of love, awkwardness, fear of leaving your hometown, and weather. Lots and lots of weather. Fleischman (last name only) is a mechanic and amateur (but very skilled) meteorologist at the Hotel Jested, a magnificent architectural marvel in the mountains of Liberec (it's a real place, check it out here). He's also a 30 year old virgin who has never left Liberec and is deathly afraid to do so. He also loves Ilya, the hotel's maid. But she's dating Patka, a total jerk who's a waiter at the hotel. Meanwhile Zuzana, who also works in the hotel, has her eyes on Fleischman. Meanwhile Mr. Franz, an old Luftwaffe pilot sends Fleischman on missions related to scattering his old war buddy's ashes. To that purpose, and to finally escape Liberec, Fleischman is building a makeshift weather balloon, and waiting for the winds to be absolutely right. Funny, touching, with a remarkable range in scope, from the small shabby town with its slightly fractured characters, to breathtaking scenery of the mountains and the hotel (honestly, it's beautiful there. I want to go there just to stay in that hotel for a few days). Here's a snapshot of director David Ondricek, writer/translator Pavel Jech, and star Klára Issová (Ilya): 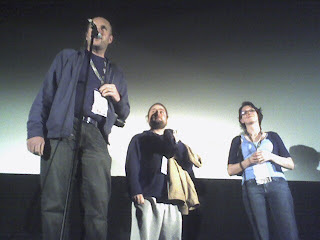 Then next up was the French adaptation of D.H. Lawrence's erotic classic, "Lady Chatterley". What can I say when my least favorite movie of the day was the César (French Oscar) winner (for best film, best adapted screenplay, best actress, best cinematography, and best costume design)? And seriously, my only complaint would be that it's too long. It's 2 hours, 48 minutes, and it could have gotten by with just 2 hours, 40 minutes. Okay, an American studio would cut it to less than 2 hours, but according to IMDb there's also a French TV version that's 3 hours, 40 minutes long. Anyway, that's all beside the point. Except for my exhaustion (which probably had something to do with seeing 7 movies the day before and 3 movies prior to it that day), it was a beautifully and intimately shot, deliberately paced, and highly erotic story of love, lust, and class barriers. I'll assume everyone knows the story, if not--Lady Chatterley sleeps with a servant (the gamekeeper) because her husband is a cripple. The story's not about the action, it's about the internal emotional lives of the characters, particularly Lady Chatterley, and the movie gets that very well. Oh, one other minor point, since this is something that bugs me in American movies. While it was performed in French, they left the setting in England, but had British characters speaking French. This tends to bug me in American movies, especially when they substitute a ridiculous accent for a foreign language. See "Shadow of the Vampire" for a prime example, or Mel Brooks "History of the World: Part I" for an example of mocking this ("We French don't even have our own language, all we have is this ridiculous accent!"). Anyway, I don't know if they put on a British accent or not, but personally if you're going to substitute one language for another, it might as well be unaccented. Okay, that was off topic, but I still liked the movie, even though it was just a tad long.
And finally, there was a charming Irish musical romantic comedy, "Once". Actually, to classify it as a musical is wrong. Although there's music all throughout it, it's organic to the story as the male lead Glenn Hansard (credited as "Guy", and lead singer of Irish band the Frames--director John Carney was bass player for the Frames) is an aspiring musician (his battered, worn guitar speaks of how long he's been struggling), currently performing on the street and working in his father's vacuum repair shop. He meets beautiful Markéta Irglová (credited as "Girl"), a fan of his music and of him. A simple romance blooms, as they make music together, first in a little music store where the owner lets her play the pianos, and finally in a studio, as she convinces him to record a demo tape to take to London in hopes of fame and fortune. Everything unfolds on such a small, intimate scale (with non-professional actors) that it feels very real and immediate. And the Irish folk-rock music sets just the right tone (both in Hansard's plaintive wailing early on, and later in the much sweeter love songs they sing).
And that was last Sunday.
Posted by puppymeat at 9:25 AM