Jason goes to SFIFF in Palo Alto--day end minus 2

Which I think makes it day 13. Anyway, last Tuesday. The festival is also at the Aquarius Theater in Palo Alto now, so it's closer to my work and home. Two movies last night, let's jump right in.

First up was an Algerian movie, "Rome Rather Than You". Described as a "slow motion road trip", it's also a slice-of-life in Algreria story. The narrative is about Kamel and Zina, living in Algeria but wanting to emigrate. Kamel used to live in Italy where he worked in a pizzeria, and wishes to return. Zina wants to go with him, but neither have the proper papers. So they go on a trip to meet the guy who can get them false papers, along the way running into the authorities, friends, fundamentalists, etc. Actually, the narrative was kind of hard to follow, and it was deliberately slow. But there were certain scenes that were very striking, for the use of sound (bringing the background noise to the same level as the dialogue), visual (there's one scene where they're driving in the car and they come out of a shadow and the windshield is suddenly bathed in bright sunlight. It looks like they're driving directly into the sun), and editing (very long takes of many scenes, which stretches or breaks the patience of audiences that are used to more standard fare). All in all, it was intermittently interesting, and one of those movies that would've played better if I was more rested (i.e., at the beginning of the festival). Here's a picture of director Tariq Teguia (left) with his translator: 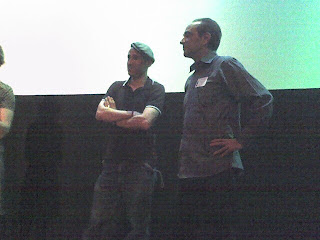 Next up was "Reprise", a movie that continues Norway's recent explosion of great cinema. Director Joachim Trier is a Norwegian skateboarding champion as well as a great filmmaker, and although there's no skating to speak of in it, there is a sort of rebellious youth feel to it. Specifically, it's about reconciling your rebellious youthful dreams with growing up and realizing your dreams, but losing your rebellion. It opens with the imaginary hopeful future account of the writing careers of good friends Phillip and Erik--where they both become successful, have widely popular books, leave literature for various reasons, then make triumphant returns to literature. However, in real life Phillip's first novel is a huge hit while Erik's is rejected. No problem, they're still good friends, and Erik is happy for his success. Problems really come when the situation reverses. Erik's novel is accepted by a different publisher, meanwhile Phillip has a nervous breakdown brought on not only by his success but his obsession with his girlfriend Kari. Hilarious and kinetic, powered by a punk rock soundtrack and some inventive visual and storytelling techniques. Ultimately it's a touching story of two friends' divergent paths, and reconciling who you are with who you dreamt of being.
Posted by puppymeat at 2:01 PM