Jason goes to the penultimate day of SFIFF

Yay, I got to use the word "penultimate!" Anyway, again I went to Palo Alto, for two more movies last night.

First up was "Fabricating Tom Zé", a documentary on the cult Brazilian musician in the title. Obscure musician documentaries have long been a staple of Indiefest more than the International Film Festival, that and the fact that Indiefest staple Alicia Perre-Dowd was the house manager and introduced the films in Palo Alto almost made me feel like I was in another festival (and my favorite festival at that, so it was pretty cool).

Anyway, the movie opens with an old, grubby man (Tom Zé) getting up on stage, at which point I asked myself, 'is this about a homeless guy who's a famous cult musician'. Well, it's not, but it is about a pretty crazy character. Instrumental in the "Tropicalismo" movement of political music in Brazil in the 60's, he lapsed into semi-obscurity, only to resurface more inventive than ever. Specifically, he's the kind of manic genius who will go on stage with no play list, improvise a concert based on the audience's reactions, compose new songs between encores and force the audience to sing along. Director Décio Matos Jr., a friend of Tom, followed him around for a recent European tour, playing to full stadiums and mostly positive reactions (there was one major failure, and the danger of his method is that sometimes he just never gets anything from the audience). Some highlights--a rhythmic piece performed with a partner by hitting each other on the head (wearing hard hats, of course) with hammers, and a piece performed on grinders, shooting sparks for an audio and visual spectacle (Einsterzende Neubaten has done the same thing, but his performance was far more musical). Anyway, it was a cool, swinging movie about a really inventive musician and some great music. Rumor has it that after the first screening in San Francisco, all Tom Zé CD's in the local music stores had been bought out. Here's a picture of director Décio Matos Jr.: 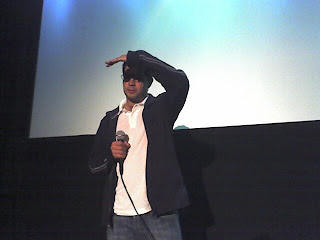 And next up was a real mind trip, "amour-LEGENDE" (and that capitilization is correct, that's how it was shown in the credits). A Taiwanese movie, in a mix of Japanese, Mandarin, Spanish, and English. This is the kind of crazy non-linear non-sensical movie where the more it frustrates everyone else, the more I love it. Another prime example would be "Naisu No Mori", but while that movie is so obviously free-associating that it can be dismissed as a sketch show (sort of Monty Python goes for confusing instead of just funny), "amour-LEGENDE" has enough of a hint of a plot that it's all the more frustrating when it's insistently non-sensical. The movie opens with Oshima waking up on a remote South American desert island, suffering from memory loss and next to a mysterious woman named Coco. Apparently he's married (to a woman named April) and ran away from the high-rises of Taipei with his mistress (May, who is not the woman he wakes up with at the beginning). Now he's trapped on a strange island, where he meets strange underground royalty, suicidal squirrels, and a lot more nonsense. Coco offers to help him find May, and they embark on a journey to Snow Mountain, which makes no sense because a) they're in a desert--no snow anywhere, and b) everyone warns them that couples who think they have a future together won't if they go to Snow Mountain. Anyway, it's a real mind-fuck, and to my thinking a sort of comic riff on the pointlessness of chasing elusive love. Or perhaps, not any love, but legendary love is so elusive that the pursuit of it is just comic nonsense.
Posted by puppymeat at 7:56 AM