One big event last Wednesday, Spike Lee received the festival's directing award, and was at the Castro for an on-stage interview, Q&A, and the screening of parts 2 and 3 of "When the Levees Broke", his documentary about hurricane Katrina.

Like always, I was front-row center. Although for these interviews as opposed to the movies, lots of people want to be in the front row, so I actually had competition. Thank you, Cinevisa (still not really worth the $650, but I like having it). Anyway, here's a pic from front row center, taken on my cell phone, showing a projected Spike Lee looming above the real Spike Lee and his interviewer, film critic Wesley Morris. Sorry their faces are so washed out, my cell phone doesn't deal with harsh light conditions well: 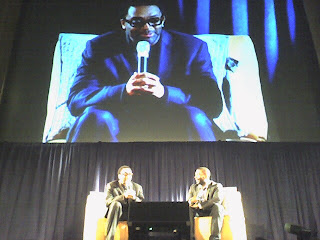 Anyway, Spike was a very cool interview. Like so many of these events, it made me realize how much of his earlier work I've missed. So I've added a bunch of them to my Netflix queue, and I'll catch up on my Spike Lee knowledge in good time.

As for the interview himself, let me first answer the question everyone has asked me when I tell them I saw Spike Lee--yes, he is short in person. In fact, "short" would be a good way to describe how he answered most questions, too. And I don't mean that in a bad way, usually he could satisfy the audience and make them laugh in just a few words. It's just a striking difference, since in most of these types of interviews that I've seen the guest panders to the audience a lot more, and will launch into elaborate (probably preplanned) stories to entertain us. Spike came off as less interested in telling us what he thinks we'd like than in telling us what he thinks. And I think it's fair to say that comes through in his movies as well.

So then we watched "When the Levees Broke: Acts II and III". I have to confess a few things. First, when the documentary first showed on HBO, I only had basic cable and I missed it. Second, I chose to see Spike Lee at sort of the last minute. Not quite, but only a few days ago, once I had already started going to the festival. Basically this meant I had no time to buy or rent the DVDs and watch part I before I saw the next two. It's not really required, but I wanted to. So I committed a sin--I downloaded it. But as soon as I watched it, I deleted it and I swear I've ordered my own DVD set from Amazon.com, so I'll make myself honest soon.

In any case, Act I is mostly about the intitial shock and horror of the storm. Told through interviews with the survivors and some sparse news footage, it seems like the natural (possibly the only) way to tell this story right. But what's really striking is that it's not really political--not yet. Given how much the aftermath has spun up into a huge political issue, it's important to realize that a) it didn't start that way, it started out as just a tragedy, and b) there are real people, not just political pawns, who lived through this and lost everything.

Act II and III is where it gets political. Or, more to the point, is where people get fucking pissed off. Slow, inadequate response, neighboring towns refusing to let them come in, rumors flying that everyone remaining in New Orleans are baby-raping looters (rumors that, of course, turned out to be completely untrue). This is where everything just broke (not just the levees, here it's like our collective national sanity broke). It still focuses on the interviews with people, but the news footage and analysis takes a larger role. In the proudly liberal SF audience, of course the major political players/events get cheers or (more often) hisses (we don't boo in SF, we hiss). But for me, those moments play well with the interviews as touchstones to remind me that while the news focused on, for example, Condi Rice buying shoes, this is what people were going through. Or when the media had fun with the "Go fuck yourself, Cheney!" caught on tape, what was going on with the guy who yelled that (he lived next door to the press conference, and when he was trying to get home he was detoured miles out of his way so Cheney could sit there and talk about how much he cared about the people there). Those touchstones (Kanye West saying "George Bush doesn't care about black people") serve to remind us where we were, and the interviews show us where the victims were at the same time. Powerful stuff, that breaks through all the extreme bullshit that surrounded the aftermath. Can't wait to get the DVDs and re-watch I-III and finally see act IV (and apparently the DVD included a bonus act V which wasn't on HBO).
Posted by puppymeat at 7:08 AM