Okay, it's been a long weekend, 14 movies and one special event to write up. So let's jump right into last Friday, starting with that special event:

Robin Williams was at the Castro to receive an award for acting like a lunatic. He was sort of interviewed by local writer Armistead Maupin ("Tales of the City"), who really didn't have to do more than say a few words and Robin would run around and riff like a manic comic idiot savant. It was awesome. Here's a pic of Robin and Armistead on screen, towering over Robin and Armistead on stage: 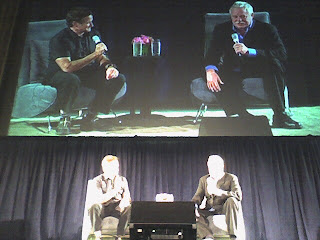 So then they showed "The Fisher King" by Terry Gilliam and starring Robin Williams, but I've seen that movie about a dozen times, it's one of my favorites, I own the DVD, and if I stayed it would've been really tight for me to make it to the Kabuki theater to see the midnight movie (more importantly, it would leave me zero time for free beer). So instead I just took off and went to the Kabuki right away, where I actually got there in time to see an extra movie before the free beer and midnight movie. So, here's a movie I saw just because it was there: "Love For Sale: Suely in the Sky". Surprisingly charming and uplifting given the subject, this Brazilian movie is the story of Hermila, a young woman who moves from São Paulo back to the village where she grew up, taking with her a newborn son. She moves in with her grandmother and aunt, and waits for her boyfriend (and father of her baby) to come join her. Slowly it becomes clear that he's not coming, but rather than give up she decides to make her own living. She makes some money to live on by raffling off a bottle of whiskey (and, of course, getting much more than if she just sold it). Following the same model, she follows that up by auctioning off herself. Or rather, "one night in paradise" with her. Yeah, it's about prostitution, but on the level of a human choice rather than a moral question. It's never really depicted as a smart choice, but she's depicted as a strong, independent, nonconformist and the movie respects her for her choice (even if no one in the movie does).

So then it was time for a few free Stella Artois and then the midnight movie, "Cold Prey". A horror film made in Norway, full of beautiful Norwegian winter mountain scenery. At the trivia contest before the movie, I won a free poster by correctly identifying a line (cut out of the movie) that referenced "Evil Dead II". Which was awesome, but also kind of colored the whole movie for me--while I watched I kept looking for "Evil Dead" references. Anyway, the movie starts with a shot of a little boy running terrified through the snow as something evil chases him (POV of an unseen evil--there's an "Evil Dead" reference right off the bat). Then cut to modern times, as a group of teenagers head up the mountain for a ski vacation. One of them gets injured, so they hole up in an abandoned ski lodge (really more of a "Shining" reference, but I connected it with the Evil Dead cabin first). They picked the wrong freaking lodge, as the unseen evil (that POV returns) starts picking them off. Eventually clues are found in the hotel register (which at first I mistook for the Necronomicon, but that might be kind of a stretch). Great setup, awesome scenery, good acting with well-rounded characters. And most importantly, it's got absolutely genuine scares with a good dose of humor in it as well. Excellent.
Here's a pic of director Roar Uthaug introducing the film (it ended too late for a Q&A that night) with SFIFF associate programmer (in charge of the late shows) Rod Armstrong off to the side. 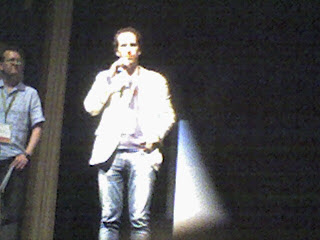 And that was last Friday. Just 12 more films to write up from the weekend.
Posted by puppymeat at 8:05 AM