Jason goes to Berlin and Beyond--Day 3

Yeah, I skipped day 2. I was busy. Anyway, big Saturday full of movies, here we go:

First up was the short film program, titled in the efficient German manner, "Short Film Program":


"Apple on a Tree"--A musical comedy about an apple who dreams of being a man. God grants his wish, then he finds out that being a man sucks, and wishes he were an apple again. Shot in Soylent Green-imation--where everything is made of people! This movie is awesome! I'm still humming, 'All I wanna be, is an apple on a tree!'


"Fair Trade"--Specifically, trade between Africa and Europe across the Straits of Gibraltar. More specifically, about the trade in African babies to childless Europeans. Ummm..."fair" is meant ironically.


"My Father is Sleeping"--A coming-of-age day in the life of a little boy living on a farm with his sick father and carefree sister. A story of growing up, responsibility, death, and bunnies (and dead bunnies...that was sad. I've seen too many dead bunnies in films this past year). Here's a pic of producer Sol Bondy at the Q&A afterwards: 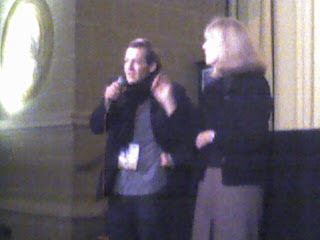 "Diary of a Perfect Love"--An animated comedy about a loser who gets a dream job designing a realistic robotic toy hamster. He also meets and falls in love with his beautiful colleague. I just have to say, I'm a big fan of German cynicism about romance. Which probably explains why I'm so alone. Moving on...


"Video 3000"--This fancy new remote controls the whole freakin' world! I wonder what happens if I press the power button?


"Mammal"--Mother and son, in a tense but symbiotic relationship. Scale changes everything.


"Women Talk About Themselves"--Specifically, Iranian women. And they talk about their hardships and their hopes.

Next up was the documentary "The Red Elvis", about Dean Reed. If you're like me, you hadn't heard of Dean Reed before. Think of him as a little like an Elvis knock-off from Denver. But he never really caught on in America. He was, however, immensely popular in South America, particularly Chile. With his fame, he felt it was his responsibility to try to make the world a better place. And to him that meant getting involved both in pacifist causes and in the Communist revolution in Chile. He became an active member of the Communist party, and played in Moscow and East Germany. There he met his first wife, and stayed. Although he always claimed to love America, he also spoke out against it quite a lot. Eventually he even abandoned his pacifism and advocated outright struggle. Through it all, he was a matinee idol, playing to sold-out shows and making 20 movies in East Germany. He was also a notorious womanizer and went through his share of wives. It all ended in 1986 under mysterious circumstances--officially ruled a suicide in a lake in East Berlin. A fascinating person and a very well made movie that makes great use of archival footage and contemporary interviews. Look for a biopic of his life coming out soon from Tom Hanks, of all people?! Here's a pic of Director Leopold Grün: 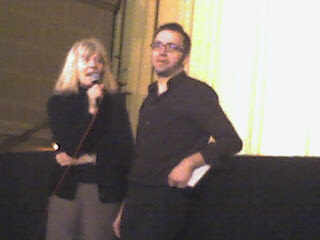 Next up was the Swiss crowd-pleaser, "Late Bloomers". Martha has lived for 80 years, the last 9 months as a widow. She's lost her zest for life, and is mostly just waiting to die while keeping her husband's old shop open. Her son, the local pastor, wants the shop for his bible study group (and to cavort with a female parishioner--oooh la la!). An opportunity to be useful presents itself when the town choir's banner needs to be mended. She used to sew before she met her husband. But as her friends help her with the banner, a more startling revelation comes to light. She didn't just sew--she used to sew sexy lingerie, and dreamt of opening a boutique in Paris. So her friends convince her to do just that, but in their tiny Swiss village instead of Paris. This causes quite a stir for the simple, conservative village. It's a generational struggle, with the twist being that the octogenarians are the ones with the hip, cool, new ideas, and the young people are the stick-in-the-mud hypocrites. It's old age having a go at youth, and although it plays out in rather predictable ways, as I said it's quite a crowd pleaser. In fact, the festival write-up claims it's the most successful Swiss film in 25 years. Neato!

Next up was the bad-skin drama "Neandertal". Guido is 17 years old and has suffered all his life from neuro-dermatitis, a skin condition sometimes called German eczema. It's most prevalent in Germans, and particularly suburban Germans. From what I gathered, it's sort of a psychosomatic disease, in that the extent of the rash can be affected by the stress in the life of the sufferer. While most denizens of Neandertal (the small German town after which the caveman species gets its name) want to leave, Guido just wants to be normal. Not much of a chance of that, though. He discovers that his parents perfect marriage is nothing but, and he runs away, moves in with his older brother, and meets the charismatic but dangerous rogue Rudi. He idolizes Rudi, and with his help begins a quest for independence that actually causes his skin to clear up. But not all is right with Rudi, either. It's a very tense, exciting movie about the struggle between our caveman instincts and our civilized upbringing. Here's a pic of composer Jakob Ilja (I should mention that the soundtrack was excellent) and Director Ingo Haeb at the Q&A afterwards: 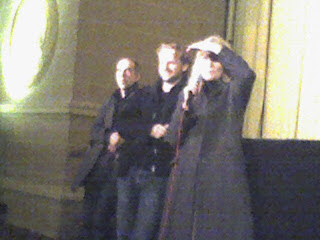 Next up was "Yella", which was introduced as a metaphysical thriller. I kinda wish it hadn't been introduced that way, because it kind of ruined the "surprise" ending for me. Umm...so forget I described it. In fact, forget I mentioned there's a surprise ending. Crap! Anyway, Yella is a talented accountant from East Germany who's just been offered her dream job in the west. Her borderline psycho ex-husband Ben doesn't want her to leave. He insists on at least driving her to the train station, but instead drives off a bridge into a river, nearly killing them both (in a very exciting scene). She runs to make the train just in time, and gets on well in her new job, assisting in business negotiations by discovering business secrets by studying balance sheets (she's darn good at her job). Unfortunately, Ben continues stalking her, and she fears for her life. Especially when she starts having an affair with her colleague, that just pisses Ben off more. Meanwhile any sounds of water sets off flashbacks reminding her of her near death experience. As I mentioned, there's a surprise ending which unfortunately I guessed pretty early on. It still didn't keep me from appreciating the acting and how well the whole thing was put together, it just all felt inevitable from very early on. Oddly, most of the audience seemed perplexed by it, either questioning what happened or accusing it of ripping off "Carnival of Souls" (oops...bigger spoiler, if you've seen that). It must have been a frustrating Q&A for actor Hinnerk Schönemann (Ben), pictured below: 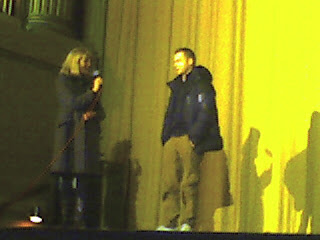 And the final film of the night was "The Lives of Others", part of the tribute to Ulrich Mühe, the great actor who sadly passed away last summer. This was the best foreign film Oscar winner last year, and it's been reviewed pretty much everywhere. So I'll just echo that it's still a great, great movie and I don't know what I was thinking when I predicted "After the Wedding" to win instead of it (I know, I was thinking Mads Mikkelsen is awesome, but that's another story). I take it back, "The Lives of Others" is excellent.

Here's a pic of Anna Maria Mühe accepting the lifetime achievement award on behalf of her father. She's also an actress, and I'll see her tonight (Monday, Jan 14th) in "Twisted Sister": 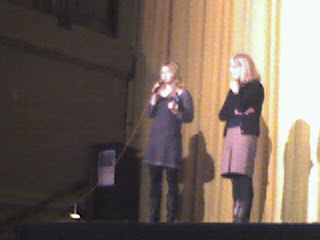 Posted by puppymeat at 8:59 AM

1) Dean's first wife "Patricia" was American living in California where they first met.

2) It is unfortunate if the latest movie about Dean said he was a member of the Communist Party. I have no evidence that he was and knowing Dean I remember that he was not a joiner.

Unless he was trying to change it from within. We Reeds are known for fighting our battles from inside rather than throwing rocks from the outside.

Thank you for your corrections, Dale. I'm going to copy this onto a main page post along with an apology and explanation so people can see it easier (without having to click on the comments).