It was a true silent movie show, with a comedy short and an action feature. The comedy was provided by Laurel and Hardy with TWO TARS. As two sailors on shore leave, they pick up a couple of girls in their rented car, and head out for a trip. But a traffic jam slows them down, and they start a riot which ends with every car getting destroyed--much to the delight of the ladies. This was a storage prints, so all but one or two frames of the titles were removed (so foreign distributors would know where to put their titles). So we couldn't read anything, but you really didn't have to. It was hilarious as it was.

And then Douglas Fairbanks wowed the crowd with his trademark daring-do--in Technicolor. That's right, all the way back in the silent days (THE BLACK PIRATE was made in 1926), there were some color films. Two-strip Technicolor was the new thing then, although it was very expensive and some projectionists had a hard time with it, so it was released in color and black-and-white prints. We got the color version.

Fairbanks plays the title role (of course), but he doesn't start as a pirate. He and his father are the only survivors of a pirate attack, and are marooned on an island. He swears revenge, and as luck would have it the pirates show up to hide their treasure. But instead of a straightforward attack, he uses his cunning. He joins the pirates, and kills their leader in a test of strength and skill with a sword. To most, he becomes the new leader, but there's a faction that is loyal to the old ways. He wins most over by taking a merchant vessel single-handed (a showcase of his acrobatics). But then when it's discovered that there's a beautiful young lady on the ship, he must protect her--both because of his sense of honor and because of love at first sight. And this leads to more cunning, more acrobatics, and more heroism.

Douglas Fairbanks was famous for doing his own stunts, and watching him is pretty amazing. One thing I really love is his way of standing with his hands on his hips--probably the only Douglas Fairbanks "move" I can do. But something occurred to me on the way home last night. I've seen that pose before--in someone who's arguably more famous for it than Fairbanks, but someone who came along much later. He must have been copying Fairbanks all along, and the only thing that makes sense is this: 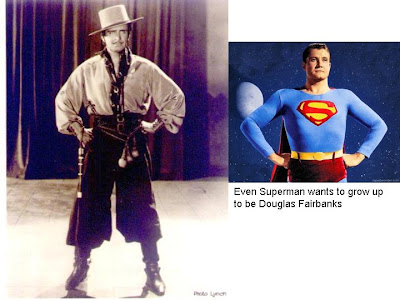 Posted by puppymeat at 6:28 PM

I was playing games online however for reading this post more interesting thanks for the share please do keep it going great job....Loveing this.