I only had time to fit in one movie yesterday, but it was a good one. "I Have Never Forgotten You" is the definitive documentary of the life and legacy of Simon Wiesenthal.

Wiesenthal was, of course, best known as the world's biggest "Nazi Hunter", and the center that bears his name created the Museum of Tolerance in Los Angeles (it also produced this film through Moriah Films). I learned about Simon Wiesenthal mostly in the 80's and 90's, when he was an old man receiving many awards for a life of great work. But I had never really heard his whole story. I knew he was a Holocaust survivor. I didn't know he was an architect (the two of his buildings that still survive are shown in the film). I didn't know about how he became a Nazi hunter, working with the American officers investigating war crimes. I didn't know about how his testimony was invaluable because he took such detailed notes (and drew pictures of it all). I didn't know how after the American office closed, he opened his own office. I didn't know about his struggles to keep his office open, I'd figured who wouldn't fund an office of Nazi hunters? I didn't know how he struggled in anonymity until the famous arrest of Adolf Eichmann. I especially didn't know (and was disturbed by) how he was a controversial character in Vienna, Austria, where he settled with his wife (who also miraculously survived the Holocaust) and opened his office. Politicians vilified him (even to the point where a Jewish politician questioned how he could've survived the Holocaust, implying he might've been a conspirator), and alternatively he got in trouble for not attacking a politician who had been a low level Nazi foot soldier but not a war criminal. The most illuminating point was that Nazi-hunting was not widely respected or revered. When the majority wanted to forget, he refused to. And it was decades of struggle before he was widely recognized as a hero. Well, after watching this I will never forget him.

After the film, we had a discussion with a pair of special guests. The producer/director Richard Trank and local businessman Jack Tramiel, who survived the Holocaust, moved to America, learned to fix typewriters, and eventually founded Commodore Computers and now is the majority owner of Atari. Here are Jack and Richard talking with the audience: 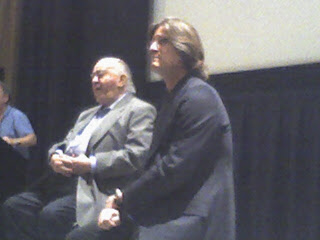 Posted by puppymeat at 6:15 PM

Email ThisBlogThis!Share to TwitterShare to FacebookShare to Pinterest
Labels: SVJFF