Jason goes to the final night of Docfest

Finally. This really was the festival that never ended. But when it did, it ended on a really good note.

First up was the short "With a Stroke of the Chaveta". A chaveta is the knife used in cigar making to cut the tobacco leaf. But this movie is only partly about cigar rollers. Really, it's about a profession I've never heard of--professional reader (or "lectora"). Dating back over a century ago, the cigar rolling houses would have rows and rows of tables where workers roll cigars. And they'd have one person sitting above them and reading to them. Classic literature, novels, newspapers, whatever. This was standard from Cuba to New York. Now, it's really only done in Cuba, but they are holding on tightly to this tradition. The movie interviews a handful of readers and the cigar makers, who talk about the democratic process they use to select a reader and the reading material. Very interesting.

And finally, the last feature I saw at Docfest was "The Rich Have Their Own Photographers". For the rest of us, we have Milton Rogovin. Milton was an optometrist in Buffalo, NY. He was also a radical organizer in the 40's and 50's, and the HUAC fingered him as "the top red in Buffalo". He was blacklisted and his optometry business folded. His wife Annie supported them as a teacher (she passed away recently, but had won awards for pioneering work in sepcial education techniques), and he took up photography. There's a balance in his work of art and social documentary. He started with social documentary photography, capturing the poor people of Buffalo's lower west side (In a series which he just called lower west side, making it Every City, U. S. A.). He photographed the working class, especially miners. There's a brilliant series he did of miners at work and then at home, showing the contrast between work and home life, and also showing why they worked as hard as they did. There's an amazing quality to his photographs, one that's best shown than described. My favorite is the little angry looking girl in Appalachia (third row down, second from the right). I can't really express why it moves me so much. I think there's a mix of poverty and dignity, pride despite hard times, a bent but not broken spirit. There are quite a few interviews in the film, but for the most part they let Rogovin and his photographs speak for themselves. Rogovin is probably the best at explaining and describing why he took the pictures, so most of the interview time is spent on him. BTW, Rogovin is still alive (but not working), and looking forward to his 99th birthday next month. 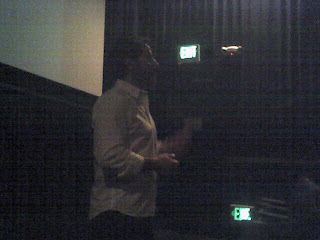