Or at least Day some big number.  The important thing is I saw another pile of movies last Sunday, and I have one more day of the festival to go (one final movie Thursday night).  Let's go.
The day started with a short film, "Peter and Ben" about a lonely farmer living in a remote valley in Wales, and the little sheep he loves.  But not that way...get your mind out of the freakin' gutter!  Actually, it's really sweet.
Then the feature, "The Linguists", about a pair of linguists who travel the world recording a few of the thousands of nearly extinct languages left.  It's as much an anthropological story as a story of language, and it plays out as a weird sort of race-against-time action movie.  They travel to Siberia to find Chulym speakers (in one weird scene, a Chulym curse word is actually bleeped out, which I thought was hilarious).  They travel to a boarding school in India.  Typically boarding schools are death camps for native languages--native speakers are forced to speak a common language (in this case either Hindi or English).  But they arrive and document the languages the students speak at home.  They travel to Bolivia and actually record for the first time ever Kallawaya, a language that has lived with just dozens of speakers for generations.  The speakers are all healers, and the language is key to their native medicine (and conversely the medicine could also be responsible for keeping their language alive).  Even in the U.S., they interview a man in the Southwest who may be the last speaker of his native American language.  You might not think there's anything interesting about obscure foreign languages, but this movie will prove you wrong.  And I'm saying that as someone who's been frustrated with foreign languages and has no facility for picking it up.
Okay, I've said this many times in this festival, but next up was possibly the weirdest movie in Docfest.  "In a Dream" is the life and art of Isaiah Zagar, a mosaic artist who has documented his life and love of his wife and family for decades on the walls of his South Philly neighborhood.  He's a narcissist, a nut, a great artist, a cheat, a victim of childhood sexual abuse, and a loving father.  In fact, it was his son Jeremiah--at the urging of Julia Zagar (Isaiah's wife and Jeremiah's mother)--who made this movie.  It's a portrait of a brilliant, tortured workaholic, who managed to forge a monument to his life and love.  A life that comes crashing down when he confesses to an affair with his assistant.  This is made even worse by the fact that his other son Ezekial has come home to live (and get off of a drug addiction) after divorcing his wife.  Suddenly the testament to a great but odd family turns into a document of a family dissolving in front of our eyes.  But in all of it...it's still absolutely beautiful, for which credit should be shared by both Isaiah for his art and Jeremiah for his filmmaking.  Very, very strange.
Next up was "Dear Zachary".  I saw it at Cinequest, and it was very traumatic there.  Still traumatic.  In fact, not only can I not write about it again, I can't even re-read my previous review.  However, this did remind me to write a letter both to the Canadian justice minister (regarding bail reform) and to my senators (regarding extradition protocols with Canada).  I'll do that...soon.
Then there was a locally made movie about ethnic minority girls growing up in the East Bay.  "Going on 13" stars 4 girls from the age of 8-9 to 13.  Ariana is African American, and goes from wanting to be a basketball to wanting to be a lawyer (after the movie, she's moved on to wanting to be a teacher).  Esmerelda is Mexican-American.  A good student, and the first girl to have a secret boyfriend.  Isha is Indian, and returns to India every summer to visit family.  She's in a very traditional family, and respects that as much as she can, although she also gets drawn into American culture and posts on Internet chat rooms as "ghetto girl" or "cutie pie".  And finally, Rosie is a mixed race Latina (Anglo-American mother with Nicaraguan father).  She might be the smartest of the four (has nearly straight A's, likes to read books), but also might have the most difficult home life (mother suffers from PTSD).  But I shouldn't imply that the other girls aren't smart (frankly, I'm not even sure Rosie is the best student, or that such a comparison is meaningful).  They're all good students, they all have pretty ordinary problems both at home and at school.  But they're all handling it in their own way with their own source of strength.  This isn't a movie about how difficult it is growing up minority.  Or growing up more lower-middle class, or growing up in East SF Bay (where some neighborhoods are tough, but most really are okay).  Rather, it's an antidote to those stereotypical stories.  These are young girls making their way through real life.  And it's refreshing.  Here's a pic of directors Dawn Valadez and Kristy Guevera-Flanagan, with Isha in the background. 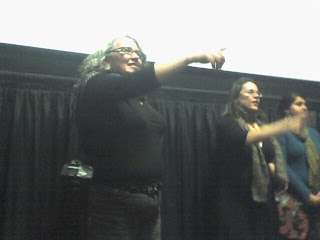 And here's another pic with (from left to right) Kristy, Isha, her mother, Ariana, and her mother: 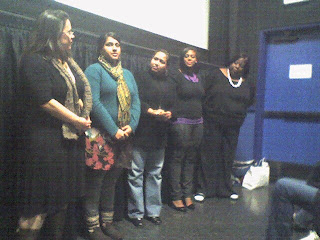 And, by the way, this was my 365th feature-length movie program in theaters this year.  For the second year in a row, I've topped a movie a day for the full year.

And that is that.

Posted by puppymeat at 8:41 PM