Jason slips into a Vortex and sees some Eddy Falconer movies

I'm still a bit behind in my posts. Last Thursday I went back to my favorite speakeasy movie lounge. They're doing a series of Thursday night movies for the next month or so. This is the first I made it to. Details at their myspace page.

Despite having Friday off, it was still a long night at work. So the first thing I did when I got there was downed 3 of their excellent martinis. Then I had to switch to beer. So I apologize for not having a crystal-clear memory of the night.

Anyway, the night was a showcase of the work of local experimental filmmaker Eddy Falconer, pictured here: 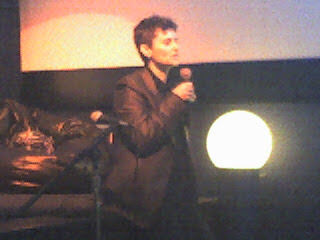 I didn't know of her work before tonight, and I only got a small taste, since I had to leave to catch the BART home (I just didn't have the stamina for an all-nighter). But here's what I did see:

"Something from Nothing" is a short film made entirely of edit effects in Final Cut Pro (I think, it might've been a different program. Sorry, I'm not a filmmaker). You'd think that couldn't be interesting, but actually it was pretty amusing (granted, I was drunk and I'm already pre-disposed to like just about any example flickering lights on a screen with synchronized sound)

"Tarot of Berlin" is her feature length film shot in Berlin when she was living there just before the wall fell. Silent footage (with music, but dialogue free), first of giant tarot cards all over Berlin. Then people modeling the characters of the tarot. Then a mix of the two.

And then I had to catch the BART home, so I missed the rest of the night. But it was a fun night, and just the wind-down I needed for the 4th of July weekend. And now that I think about it, I didn't stay long enough for the Trader Joe's enchiladas I was promised. Now I want to get some Trader Joe's enchiladas.
Posted by puppymeat at 4:12 PM