I'm starting to get dangerously behind in my updates. Anyway, I saw two more movies at North Jewfest last Saturday. Here they are:
First up was "Max Minsky and Me", which is sort of a rarity--a contemporary Jewish child's story in Berlin. Nelly Sue Edelmeister is a 12 year old know-it-all astronomy buff, teased at school more for being a nerd than being Jewish. She studies hard, gets straight A's (except for gym), and is preparing for her Bat Mitzvah. Besides astronomy, her other love (or schoolgirl crush) is Prince Edouard of Luxembourg, who also happens to be an astronomy buff. Too bad Luxembourg is like a 1000 km from Berlin. But there is a way she can make it there. Prince Edouard is also a fan of girls basketball, and hosts a junior high all-girls tournament inviting teams from all over Europe. So all she has to do is make it on the girls basketball team. She sucks now, but all she needs is a good coach. Enter Max Minsky, the new bad boy who has been expelled from every school between Munich (where his father lives) and Berlin (where he and his mother have just moved). Nelly offers to tutor him, but it's really just a front for them to practice basketball (which she pays him for with her tutoring money, completing the circle of money). Of course, things progress predictably as the two start off as antagonists but become friends. The whole thing is handled with a gentle sense of humor that rather pleasant. From a Jewish perspective, the most interesting aspect is how she ditches her Bat Mitzvah preparations for basketball. That shouldn't be a problem, since both she and her mom are atheists (and her father's not even Jewish). But her mom is still upset about it, and there's a line from her great aunt that captures perfectly what I've thought about being a self-identified Jewish atheist--"Being Jewish isn't about G-d, it's about behaving as if he exists even if he doesn't." I apologize if I didn't get that quote exactly right, but hey it was translated from German anyway.

Next up was a bit of what I call "emotional whiplash". This happens a lot in film festivals--you see one movie that has your emotions going in one direction (in this case happy and cheerful) and then the next movie goes 180 degrees the other way. This was a Holocaust documentary.
But first, the short animated film "Der Soldat", which uses tragic, silent, simple line drawings to tell the story of a young soldier who finds an older, dying man (presumably wounded in the unspecified war). While trying to drag him to safety, he comes upon an entire plain of the wounded and dying. Very moving. Here's the director (and Jewfest alum) Max Cohen: 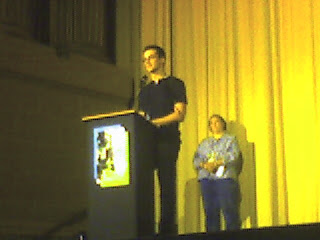 Then that documentary I mentioned. I guess technically it's a Holocaust survivor documentary, "Saved by Deportation: An Unknown Odyssey of Polish Jews". This film is a major revelation, and tells a survival story I've never heard before. It's well known that before WWII there were ~3.3 Million Jews in Poland, and after there were only 300,000. What's not as well known (and I'd never heard of it) is how about 80% of the survivors avoided the death camps. Here's the typical story: A Jewish family is living in western Poland when the Nazis arrive. They have friends or family in eastern Poland, and flee to live there. The Soviet Union takes over eastern Poland. The Jews believe the war will be over quickly--this Hitler fellow is nobody and he'll be taken out soon, but this Soviet rule kind of sucks. So they sign up to return to their homes in the west. Those sign up sheets were a ruse used by the Soviets to identify people who were disloyal and pose a threat to the Soviet empire. So they're loaded onto trains and instead of heading west they're sent to Siberia to work in labor camps (and later moved to Uzbekistan and/or Tajikistan). Life is hard, and of course Stalin was never any friend to the Jews, but only when they finally return "home" after the war did they realize what true horror was (and is, as many Poles are now violent anti-Semites).

The other major revelation is the absolutely charming Asher Scharf--one of the survivors, now 80, and one of the kindest, friendliest people ever. With a sense of history and irony over how the Soviets accidentally saved his life, he's the star of the film and a source of constant good humor over their predicament (hearing him describe the open sewer in one village as "nothing fancy, but we survived" is priceless). Make no mistake, conditions were horrible and many died of diseases. But the third revelation is the testimonials of how, despite what government policy was--the ordinary villagers were friendly, courteous, and welcoming of their temporary refugee "guests". Particularly striking since in Uzbekistan and Tajikistan the villages they lived in were predominantly Muslim (and still are, and are still very friendly and welcoming when he comes back to visit).

An impressive documentary about a part of history that should be better known. Here's Producer (and son of a Polish Jew deportee survivor) Rob Podgursky: 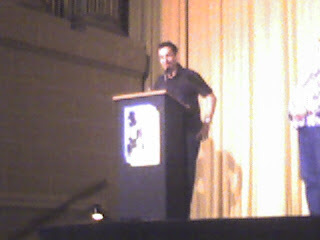