Back at SF Jewfest, for just one movie last Tuesday.
That movie was "Jerusalem is Proud to Present", a documentary on the efforts to celebrate the World (Gay) Pride Week--in Jerusalem for the first time. An interesting look at the tensions between the secular Jewish state and the more orthodox, conservative residents of Jerusalem. Director Nitzan Gilady is definitely sympathetic to the organizers (he's a gay man from Tel Aviv, which he described as a much more modern metropolitan city than Jerusalem). But to his credit he went out of his way to interview and show protesters as well, to a truly remarkable degree. Whether listening to the rants of a Rabbi describing how a stabbing at a previous Pride march was all the fault of the victim, or following Jerusalem's one gay city council member through the gauntlet of death threats, his camera always seems to be in the right place.
There was a panel discussion after the movie with director Nitzan Gilady, Julie Dorf of LGBT organization Horizons Foundation, Rabbi Rosalind Glazer (who's also a lesbian), and SFJFF director Peter Stein: 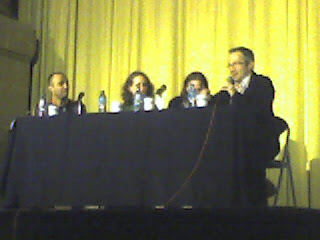 Probably the best thing about the panel was that it provided a nice counterpoint to the violent opposition that's shown perhaps too much in the movie. Yes, Israel in general and Jerusalem in particular is full of orthodox and conservatives who are violently opposed to gay rights. But gay rights to immigration, adoption, inheritance, etc. are protected by the secular Israeli law. While there were a lot of threats and protests surrounding Pride Week, it still happened. And while the march was postponed for the Israel-Lebanon war, the march did happen, and happened again the next year.