I've struggled over the years with what to nickname the San Francisco Jewish Film Festival. At first I thought to call it "Jewfest", but that isn't fair to the Silicon Valley (formerly San Jose) Jewish Film Festival. So, as clunky as it sounds, they're Jewfest North and Jewfest South (or North Jewfest and South Jewfest) to me.

Anyway, regardless of what you call it, SFJFF started last Thursday night, first with lots of speeches and thanks and applause, and finally with a movie. And that movie was worth the wait. "Strangers" is an interesting and lively improvised film. There wasn't really a script per se, as much as a premise. Two strangers meet in Berlin before the finals of the FIFA World Cup, 2006. They have identical backpacks, and accidentally swap on the train, then they have to meet up later to exchange bags. Turns out she's Rana, a Palestinian woman living in Paris, he's Eyal, an Israeli Jew, but they decide to be friendly to each other. And when it turns out neither has a place to stay, they go looking for a place together and end up having a little love affair.

Then a strange and tragic thing happened, both in the movie and in the making of the movie. Hezbollah fighters kidnapped two Israeli soldiers, Israel responded with great force, and the Israeli-Lebanon war of 2006 started. Of course this wasn't in the script (pay attention: there was no script), but they incorporated it anyway. There's an excellent split-screen shot of Eyal (a France Fan) watching the finals and equating the pain of their loss with the pain of the just-starting war. The filmmakers could've chosen to go any number of ways at this point, but they chose to go for love. Eyal follows Rana back to Paris, despite her ordering him not to. They have to battle the prejudices of friends in order to stay together, which only gets worse when he's drafted. And come to think of it, maybe they don't stay together. I'm not giving any spoilers. Maybe love isn't strong enough to overcome this conflict. You'll just have to watch and find out!

If you do want to find out, it plays again August 2 in Palo Alto, August 9 in Berkeley, and August 10 in San Rafael. 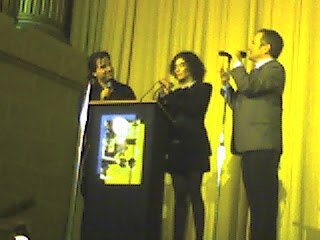 By the way, due to other commitments, I won't be able to make as much of North Jewfest as I usually do, but you should be able to look forward to a dozen or so reviews here.

Posted by puppymeat at 9:56 AM