Okay, I haven't had much time to write and now I'm 11 movies behind. Not too bad, but I have to cut into it before the marathon weekend, so here we go.

First up was "The Eternal City", shot by Americans in Rome and about Rome. It's a beautiful movie which I had a hard time summing up until Cinequest icon Chris Garcia gave me the line, 'Fellini's "There's Something About Mary"'. Brilliant line, but just so you know this movie does not have gross-out humor. What it does have is a lot of heart, a beautiful look (converting it to black and white really makes it work), interesting characters, and a fun, leisurely story. Jonny, from Philadelphia, comes to Rome to visit the girl he met last summer in Paris. Unfortunately, she's cruel and won't even let him into her apartment. In the morning, he meets the upstairs neighbor, Jess (from New York), who lets him at least take a nap in his apartment--or rather his girlfriend Angela's apartment. Angela is obsessed with her dreams, Jonny knows how to read dreams (or at least bullshit about them). Jess is kind of a slob, but also an aspiring filmmaker with a series of documentary shorts about Rome. He shows them his short "The Wild Cranes of Rome"--not about birds, about construction cranes. He's trying to get Werner Herzog to do the voiceover (good freakin' choice!) Anyway, Jesse, Angela, and Jonny start to form a bit of a love triangle, while also trying to make Jesse's epic "The Taking of Corsica", starring Johnny (it's been trimmed down a bit from the original epic script). Throw into all this an eccentric 4-fingered Argentinian piano teacher Pablo (who celebrates a birthday in the film--it fits the Cinequest theme!) who becomes obsessed with building a piano from scratch (which was the family business back in Argentina). Whew! You can see why I had trouble summing it up. I'll let 'Fellini's "There's Something About Mary"' sum it up. I didn't want to be the one audacious enough to reference Fellini while describing this film, but since I've already quoted Chris saying that, I'll second that. Here's star Joe Iacovino (Jonny) with co-director Arianna De Giorgi and co-director/star Jason Goodman (Jesse) at the Q&A: 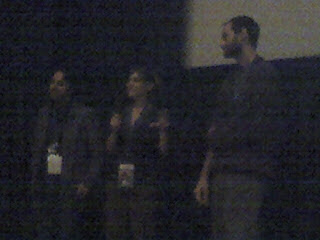 So next up was the body image comedy, "Disfigured". Darcy is an anorexic. Because she's anorexic, Darcy thinks she looks fat. So she goes to a fat acceptance group meeting, hoping to join. She's roundly rejected, and supported only by Lydia. Lydia, meanwhile, also gets shouted down by the group for trying to start a fat acceptance walking group (they think she's too into weight loss instead of fat acceptance). So begins a weird, funny, moving, and acerbic story of body image and an unlikely friendship. Things get even weirder when Bob, the one guy who shows up for Lydia's first walk, is interested in her as a fat fuck-buddy. Oh yeah, there's fat sex in here. Meanwhile Darcy has problems convincing her mother she's eating because...well, because she's not. In fact, at a birthday party (theme alert!), she takes a bite of an appetizer and surreptitiously spits it out. Ultimately, this could've been very mean, and all credit to director Glenn Gers (oh yeah, this is directed by a man) for keeping it funny (but serious) instead of going nasty. Here's a pic of Cinequest icon Chris Garcia (far left) leading the Q&A with (from left to right) Glen Gers and stars Staci Lawrence (Darcy) and Deidra Edwards (Lydia): 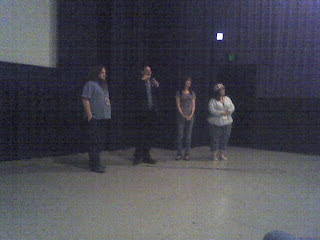 Next up it was over to the San Jose Rep for the hit crowd-pleaser comedy of the festival, "Sherman's Way". Sherman (Michael Shulman) is the privileged son of a family of lawyers, his mother is running for Congress, and he has everything planned out for him. A summer internship precludes him from going to Sonoma (or was it Napa? NorCal wine country) with his girlfriend. But challenged to be spontaneous, he screws up his courage and flies out to California to surprise her. She surprises him by making out with her new boyfriend before she notices he's there. Well, he's learned to be somewhat spontaneous and dangerous now, so instead of letting her call a cab, he hitchhikes. And that's how he runs into Palmer (the Bomber, played by James LeGros) , an ex-Olympian skier and now wild-eyed drifter. Palmer just bought (or rather, stole) a sweet cherry red roadster (oh yeah, it was the sales agent's birthday--theme fulfilled), and he's taking it to give it to his estranged son as a graduation gift. But first he has to fix it up, with the help of master chef and gun-toting wise semi-hermit D.J. (Enrico Colantoni). Sherman manages to swing another internship interview in L.A. (rather than running home to mommy), but he has to be there in a week. They've got a tight schedule to keep to, but it'll all work out if Sherman helps out on the car and D.J and Palmer aren't total flakes. So, of course, it's doomed to hilarious failure. But in the snob vs. slob antics, Sherman learns a little bit about how to do things his way, and finally learn to enjoy life a little bit.

Here's a pic of cinematographer Joaquin Sedillo, star Michael Shulman, director Craig Saavedra, and once again Chris Garcia (he actually followed me around that day, even if he did it from in front of me): 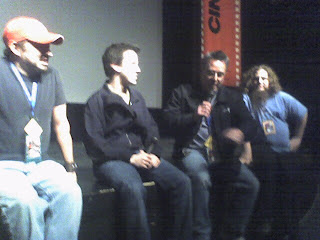 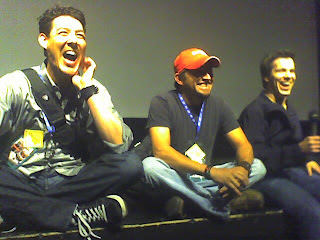 Then it was over to the fabulous California theater for the documentary "D-Tour: A Tenacious Documentary". I have to confess, I don't actually own any Tenacious D albums. I have enjoyed their antics on TV, when I've seen them. And I'm proudly one of about a dozen people who actually saw "The Pick of Destiny" on the big screen and I enjoyed it (of course, I wasn't high, so I'm not sure if I saw it the right way). This documentary follows them mostly on what was supposed to be their victory tour, although when the box office numbers come in, it takes on a distinctly sadder tone. Still, they rock as hard as possible, crack each other (and the audience) up, and are mostly good friends goofing around being rock stars. It's a little sad that Jack Black's fame overshadows Kyle Gass, and the scene of him blowing up in the dressing room at the Late Show with David Letterman (they were told Tenacious D was the guest, but the pre-script comes with only Jack Black's name listed) is probably the biggest bit of drama in the movie (how JB handled it, saying either both go on or they both bail, shows good integrity and loyalty). Sadly, without that distinct dynamic, of KG sublimating himself into the background "for the good of the group" is the driving drama in the movie. And when he gets to play with his own band--Trainwreck, you can see him perk up. And in the end, the D survives because the D is Tenacious. Plus, KG was cool enough to actually show up for the movie. Here he is, about 3 feet from where I sat in the front row. He rocks! 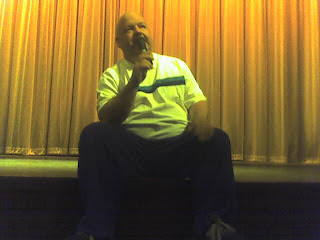 And finally, after all that fun and comedy, I had to end with the dark drama, "The Trap". I have in my notes "don't forget to mention the birthday scene", but now I can't remember where it was. I know it's worth noting that 4 out of 5 movies on Sunday had a birthday in them, and at least one movie every day so far (including Monday and Tuesday) had a birthday. This is a real theme. I'm not fooling myself.

Okay, where was I? "The Trap", I'm sure the birthday scene wasn't that important. What is important is the dark, dark moral dilemma presented in this movie. A good, honest family man has a horrible problem--his son has a bad heart and will die if he doesn't get an operation. He can't afford it, so he takes out an ad in the paper. He is contacted by a mysterious man offering enough money for the operation. All he has to do is kill a man--a man he's assured is evil. It's a win/win situation! Not really, it's a horrible lose/lose situation, especially when the target is revealed to be a family man himself, and the mysterious benefactor turns out to be unreachable by phone. Things get very, very, deadly dark--I'm sure a devastating commentary on Serbia in transition. Incredibly well done, but a little jarring after 4 comedic films, and not the note I would've liked to end the night on.

[update, thank you to Karl for reminding me that the father promises his son a cellphone for his birthday. I seem to also remember there was an actual party, either his or the girl from his class (and daughter of the targeted man). --Jason]
Posted by puppymeat at 9:26 AM

Today I saw "Illuminated Blood" and it too had a birthday. I've been on the lookout for them!

I just saw that as well, and noted the birthday reference. I'm a couple days behind on writing up the movies, but I'll get to that one soon enough.

In "The Trap" the father tells his son he'll get a cell phone on his birthday.

As a secondary theme, I have seen way too much of people brushing their teeth (loudly) this year.
Silence Before Bach
Illuminated Blood
Young People Fucking
El Camino
.... oh now I don't remember the rest, but I've started noticing it over and over. Hopefully it won't continue through the weekend movies.

ha ha, I didn't catch on to the teeth brushing theme. Other ones I've noticed are:

But neither of these are as fun to write about as birthdays.