Okay, SFIAAFF has been over for a couple of days now, I have 10 last movies to write up, so let's just do it. Here we go.

First up on Saturday was the documentary "Wings of Defeat", about Japanese kamikaze pilots in WWII. Japanese American director Risa Morimoto was brought up to believe that the kamikaze were fanatics on the fringe, but later learned that her uncle Toshio had trained as a kamikaze. He never completed a suicide mission, and grew up to be the kind, friendly uncle she knew. This, of course, went against everything she knew, so she sought out and interviewed surviving kamikaze pilots, and found they were very different from what she thought. Some volunteered, at a time when they were treated like gods. Others were pilots who were later sent to the kamikaze corps. By the end, everyone in Japan was designated kamikaze, meaning they'd fight to death even on the homeland. The interviews are fascinating, and point not to fanaticism but desperation and a bit of hopelessness in the face of authority. More than one admit that if only the emperor wasn't so proud he could've accepted defeat at a lesser price. Some of the more interesting moments: the American sailor (survivor of a kamikaze attack) who offers without hesitation that there were plenty of Americans who would've done the same thing had they been in that situation; the kamikaze pilot who admits--with all due respect to the victims of Hiroshima and Nagasaki--that he's glad the war ended so abruptly before he had to fly his mission; and most amazingly the kamikaze duo who were shot down before reaching their target, turned around, were in the sights of an American fighter...and the Americans let them go--they still want to meet the Americans who they believe saved their lives. A really interesting film.

Then I went from a serious documentary about death to a fun-filled action movie based on the enormously popular manga "Death Note". Light Yagami is a law student. One night he discovers a notebook, inscribed as the Death Note, dropped by the god of death (who does stuff like this for his amusement). The rules are pretty complicated, but in a nutshell whatever name you write in the book, will die (by default in 40 seconds by heart attack, or in the manner you prescribe in the book). As a law student and crusader of justice, Light uses it to kill vicious criminals, and becomes a sensation on the internet going by the name "Kira". Opinion on him is mixed, with most of the young people hailing him as a hero. But the cops regard him as dangerous and put their best man on the case--Light's dad. Oooh...things get tricky, as now he's killing bad guys and cops. But he needs their names to kill them. A mysterious investigator named only "L" gets involved, the cat and mouse game gets really intense, and...it ends with a huge cliffhanger just setting up the sequel ("Death Note: The Last Name", and rumor has it a third one is in production). Now I want to read the manga, check out the animated series, and above all watch the sequel, because the movie was just so exciting and the ending too tempting. Aaaaargh!

Next up was a Filipino American film, "Santa Mesa". It opens with a car crash, where young Hector survives but his single mother does not. A family friend offers to take him in, but instead he's sent to live with his grandmother in the shanty-ish town Manila suburbs (interestingly enough, the Santa Mesa neighborhood is being torn down and the residents relocated, so this is one of the last documents of the neighborhood). Hector doesn't speak Tagalog, his grandmother doesn't speak English, so it's pretty tough going. He falls in with a bit of the wrong crowd (and gets a bit of a crush on the child gang leader's girlfriend Sel). While attempting to rob a random house, he's accosted by the owner, Jose. At first gruff, Jose warms up a bit when he realizes Hector is just a lost kid, and he starts helping Jose find his way and become a photographer. On all fronts, it's a story of missed connections and cultural isolation, but also a story of finding beauty everywhere and learning to walk your own path. This is a first feature from director Rob Morales, and he's done a great job. Hey, here's a picture of him at the Q&A: 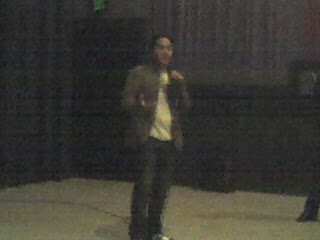 Next up was the somewhat ironically titled Korean melodrama, "Happiness" (come to think of it, I don't know any movie called "Happiness" in which the title isn't at least somewhat ironic). Lim Soo-jung from "I'm a Cyborg but That's Okay" stars again, but this time instead of being a cyborg she has 40% lung capacity and is named Eun-hee. But she again meets romance in an institution. Young-su (Hwang Jung-min) is an alcoholic from Seoul who's girlfriend just dumped him and has just found out he has cirrhosis of the liver. He goes to a wellness clinic in the country, where the instructors immediately tell him that smiling is the best medicine. He's reluctant (in fact, downright grumpy) at first, but he does take a liking Eun-hee, takes a bit better care of himself, and eventually is healthy enough to leave the center and move in with her on a bucolic country estate. Everyone's happy, the end....psych! You see, his alcoholism is always there as much as he hides it. And when his friends from the city come to visit and give him a hard time about being so boring, he's tempted. And on a trip back to the city everything goes to hell again. Hence melodrama, melodrama, melodrama. I'm not normally a big fan of melodrama, and I had some problems with this. But it's beautifully shot and well-acted, and from what I'm told it's one of the less melodramatic of the Korean melodramas. So it's pretty good.

And finally, the night ended with the locally (San Jose) made "Glory Boy Days". A coming-of-age while night ride of intersecting stories. Lando doesn't want to make a big deal about his 21st birthday, and doesn't want to hurt his very sweet girlfriend Amy, but keeps running into a sorority girl who invites him to a party. He'd rather get together at a party at his friend Aces place. Aces roommates have chicken pox, so that's out. B-boys (a festival theme, I missed the Korean movie "Always Be Boyz") Trent and Yardbirds are out to score some meth from Leaker Larry, who offers them a big score if they beat up a skinhead for him. Lars and Friday are a couple...who shouldn't be...or maybe who should be...they don't even know (I bet they just like makeup sex). And it all quickly spirals out of control. Even if you can't follow the entire plot, just enjoy the music, it's pretty cool. Besides, it's not as much about plot as spending time with these interesting characters, on the verge of the end of their glory days and entering (shudder) adulthood. 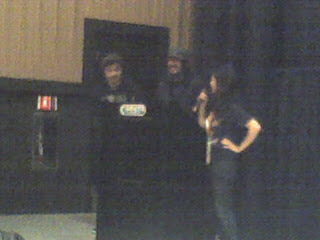 And that was Saturday at Asianfest. One more day to go...
Posted by puppymeat at 10:25 PM