I'm catching up a bit. Thank god that Good Friday is so early this year, it's a work holiday (officially "Spring Holiday") so I actually got a little rest and a little time to write before the San Jose opening night tonight.

I spent most of Sunday at the Castro theater. First up was "I'm a Cyborg But It's Okay", from Korean madman director Park Chan-wook. What do you get when the director of "Oldboy" makes a romantic comedy? Well, for starters it takes place in an insane asylum. Young-goon (Lim Soo-jung) opens the movie by cutting open her wrist and plugging wires in their. See, she thinks she's a cyborg. It has something to do with her past and her grandmother being dragged away (she thought she was a mouse). In the insane asylum, she refuses to eat, instead just licking batteries for energy. To the rescue comes Il-soon (pop superstar Rain), a kleptomaniac who's terrified he will shrink to nothingness. Obviously he's not there as a doctor. But he's just what she needs, although it takes a lot of time for her to learn it. It's a match made in the strangest, craziest parts of heaven. I loved this movie. I wanna be a cyborg when I grow up (but I want the rice megatron, because I like to eat).

Next up was a crazy, colorful, musical comedy "881" (apparently in Hokkien the title is a pun). It's set in the world of getai--Singaporean musical performances for the gods and spirits during the holy month. It's full of wild costumes and elaborate staging, to please both the seen and unseen audience. The heroes of the movie are the Papaya Sisters (not really sisters, but they met at a getai performance and live like sisters). They're pretty good, but they become great when they visit Auntie Ling's sister, the Goddess of Getai. In exchange for magical singing powers, they must abide by a set of rules--most importantly they can never love or be loved by a man (that's the difficult one to keep). But their success arouses the ire of the evil Durian Sisters, and a fruity girls duel ensues. As I said before, wild, crazy, colorful, musical comedy. Like a box of crayons crammed into your brain.

So after that, I was totally ready for a hard-boiled Koreatown gangster flick. Luckily, that's just what I got with "West 32nd", the spotlight presentation from director Mike Kang (the Motel) and starring John Cho (Harold from "Harold and Kumar"). Cho plays John Kim, a young lawyer looking to make partner by saving a poor Korean kid arrested for killing a Korean gang boss (and, along the way, maybe score with the kids older sister?). Well, he quickly finds himself in the Korean underworld culture of "room salons" (not brothels, just scotch and sexy hostesses), and Korean gang politics. And, of course, he inevitably gets the shit kicked out of him. Two things that really impressed me and make the movie really great. First, by making the outsider to the Korean-American underworld a Korean American, it offers a much more subtle and nuanced exploration of the culture (and the character--this is a Korean American who wants to be more Korean, but doesn't really know how). Second, the violence is palpable and powerful. I've seen bloodier movies, I've seen more shocking movies. But this violence has a fist behind it, if that makes any sense. It's sort of the difference between saying "hey, look at this violence, isn't is cool!" and saying "look at this violence, isn't it violent!" And that, in a way, makes it cooler. Here's a pic of the Q&A with director Mike Kang (far left) and the cast. I won't pretend to know all of the cast, but the one on the left (next to Mike Kang) is John Cho: 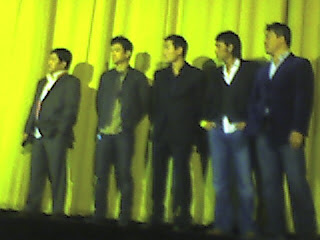 And then, I hopped on a bus from the Castro to the Sundance Kabuki Cinemas for the weird shorts program "Asians in the Claws of Neon Lights":
"Anti Sex"--From Japan, a high school age girl inherits her parents "love hotel". She doesn't really like it, but it's her business now, and maybe she'll learn a few things. Like why do people have sex all the time, at any hour of the day?
"The Bastard"--Animated sketches of a mild mannered office worker who's computer malfunctioned and turned him into a super-villain. Hilarious.
"Manoj"--A mockumentary about an Indian comedian, Manoj, who tells nothing but racist stereotype jokes. Of course, he's a huge hit with the white audiences.
"Beat of a Different Drum"--A little, pudgy Filipino American auditions to be the drummer for a rock band. At least he tried.
"Portfolio"--A Korean satire on artsy film-student cliches. It goes just about everywhere.
"Their Circumstances"--Mmmm...this meat is delicious. Hey, where's my leg!?
"Cookies for Sale"--Buy some, you grumpy old coot!
"The Seed"--Conspiracy, insanity, fighting, hidden enemies. Maybe he's crazy, maybe the world is weirder than you think. Maybe this will be made into a feature--that would be awesome! 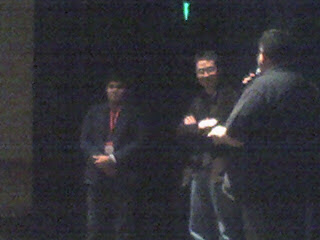 And that was Sunday.
Posted by puppymeat at 12:39 AM