It's all over but the write-ups now. 4 days worth of write-ups. So here we go:

First up on Thursday was most of Shorts Program #5: Rescue Me (I came in just for the end of "Morbido", which I'm told was excellent). The films I did see were:
"A Day's Work"--Sometimes life makes you cry. Which can work okay if your job is to dub a crying scene in a movie. Here's a pic of the filmmakers, whose names I didn't catch: 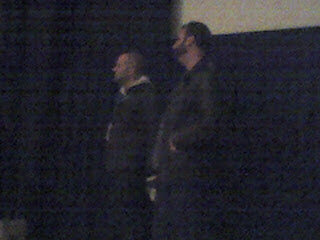 "Beijing Haze"--reminiscences of China and America, seen through loads and loads of cigarettes.
"Shadow of a Doubt"--A woman goes on a date, and is haunted by ghosts who refuse to stop following her. Perhaps the ghosts of past failed relationships? Or just manifestations of her self-doubt.
"Oubliette"--A trip to the hospital, through the eyes of an old woman who still sees herself as a little girl. Absolutely beautiful. Here's a pic of director Jurjen Blick: 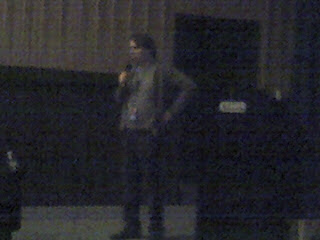 "For the Love of God"--My favorite, a stop-motion animated film about a priest who wishes he had more than just a friend in Jesus. With the voices of Steve Coogan, Julia Davis, and Sir Ian McKellen. Awesome!
"Yours Truly"--Awesome film putting classic visages from old film stock through a meat grinder.


And then I stuck around for another shorts program. I haven't seen many shorts at Cinequest this year, so this was my night to catch up. This program was Shorts Program #1: Pas de Duex. Here they are:
"Folly of Two"--Surreal absurdist story of Ben and Gus, a driver and a puzzled initiate, following the mysterious notes from the mysterious note guy. Hilarious, but does it mean anything? Maybe something about freedom at the end. Also, had a cute little stuffed bunny that became a cut little decapitated stuffed bunny.
"Personal Spectator"--I could do this job! When you watch people, they truly become alive.
"Quincy and Althea"--Finally, a bitter romantic comedy about Katrina survivors.
"Milk Teeth"--A really freaky looking animated film about a boy who follows his sister into a cornfield where she meets her boyfriend.
"Ascension"--This was my favorite of this program, and maybe of all the shorts I've seen. During a power outage, a man walks into the wrong apartment and stumbles across a cult, hoping to be picked up by the prophet Skagittah (sp?) before the world explodes. I'm always looking for a cool cult to join, maybe I should become a Skagittarian.
"The Bouquet"--Why don't men buy flowers? Because women are psychotic and suspect they're trying to make up for something horrible.
"Hirsute"--A really, really cool story about time travel, self-love, and suicide. Awesome!
Here are the Shorts #1 filmmakers. I apologize for not knowing their names, but from left to right there's one from "Milk Teeth", three from "Folly of Two", and the last guy is from "Bouquet": 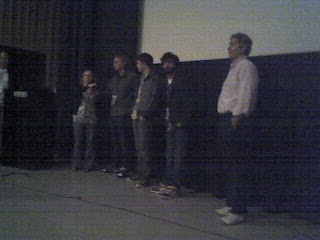 And finally, after a couple of drinks at the Paragon, I walked over to the California for the musical romantic comedy "Half Empty". Bob (played by writer/director/producer Robert Peters) is a motivational speaker who's so optimistically retarded that when his girlfriend dumps him all he can think about is cornball sayings that he can use in his speeches ("Sometimes the person closest to you is the person farthest away from you!"). He's not even bothered that his book only sold one copy in the U.S. (and that was returned)--after all, he's big in Germany! So he goes to Germany for a book tour, where he's led around by Greta. She's a complete cynic, and finds him to be a moron. As it turns out, he only actually has one fan in Germany--everyone else bought the book because they thought he was someone else (his one rabid fan is pretty funny). Well, of course there's an attraction and things move in a pretty inevitable direction. But mostly, it's charming and fun. Oh yeah, and it's a musical, and most of the songs are good (the opener "You're big in Deutschland" is pretty funny).

And that was Thursday at Cinequest. Now I just have to write up 3 more days (15 movies remaining) and I'll be all caught up.
Posted by puppymeat at 1:42 PM

Thanks for the write up man. My name is Justin Frumkes and I played "Gus" in "Folly of Two". I was googling around for reviews and appreciate that you found it hilarious. I also agree with you that "Ascension" was my favorite of the group (after mine of course, haha). What a great story about cults. Bashing on Scientology maybe? haha.
Thanks again,
www.follyoftwo.com