Asianfest continued at Berkeley's Pacific Film Archives with the companion piece to opening night's "A Thousand Years of Good Prayers".

"Princess of Nebraska" is also by Wayne Wang, also from Oakland writer Yiyun Li's collection of short stories. It even opens with an echo of "A Thousand Years of Good Prayers", this time with a shot of Oakland airport instead of Spokane airport (interestingly, both give an immediate feel that the hero is not in his or her usual environment. The 'fish out of water' is established immediately). But the two movies are companion pieces more for their differences than their similarities. Most notably, this is not a happy movie (not many laughs. For the people who thought "A Thousand Years of Prayers" was depressing, you're wrong, this is the depressing one). For another, the cinematography (by SFIAAFF alum and co-director Richard Wong) is not the classical, stable shots of age, but the frenetic movement (and imbalance) of youth. Sasha comes from Omaha to the bay area, and we're dropped in the middle of her life not knowing why. We quickly learn that she's pregnant, the father's back in Beijing, and she came to visit Boshen, the father's Caucasian male lover, for advice and support in getting an abortion. But Boshen's got his own ideas--like what an Asian baby, specifically a female, could fetch on the black market (the one child policy has led, and will increasingly lead to Chinese men with no possible Chinese wives). Yeah, this gets pretty creepy, and no less creepy for the night of drinking and prostitution she goes through. All ending, somewhat appropriately, on the St. Stupid's Day parade. You're dropped in her life, and taken out of her life almost as abruptly, with no conclusion but a hell of a lot to think about. Wayne couldn't make it to this screening, but here are actors Brian Danforth (Boshen), Patrice Banaïas (James, Sasha's "client" on her wild night in the city), Li Ling (Sasha), co-director and DP Richard Wong, and CAAM executive director Stephen Gong: 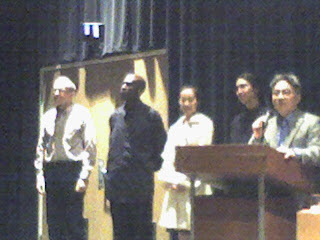 Next up was part of a retrospective tribute to Taiwanese director Edward Yang (who passed away about a year ago). The movie was "The Terrorizer", and it was difficult to digest in one sitting. It opens with a bloody shootout in an apartment building. Again, you're given no chance to get to know the characters before shots ring out. But after the shootout, which ends as abruptly and oddly austerely as it began, the movie becomes about how this violence which ripped briefly through everyone's lives continues to permeate their lives. Friends betray each other, etc. The only problem for me is there were too many characters to follow (which is why I say it's hard to digest in one sitting), so I found myself mostly bored/confused, then punctuated by powerful scenes (especially the ending). I don't know when/if I'll ever have time to watch it again, but I suspect I'd get a lot more out of it the second time.

And that was Friday at Asianfest.
Posted by puppymeat at 9:39 AM