Wrapping up writing about the final 3 days of Cinequest. Here's Friday.

The thing I really like about film festivals, after the actual movies, is meeting the filmmakers, getting to know them, drinking with them, and especially drinking with them more. The only problem is that befriending filmmakers could definitely affect the impartial, insightful nature of my film critiques.

Oh wait, I'm not an impartial, insightful critic. I'm a gigantic movie-lovin' whore, who will totally blog for martinis (Tanqueray Ten, with a twist)! What was I thinking?!

Anyway, I had met the lovely ladies behind "Young, Single, Angry" a couple of days before, and had enjoyed a few drinks with them. So I was excited to settle in for their movie. It starts with Taylor reminiscing about her childhood and thinking how marriage was the ultimate goal when she was young. Now it's her 35th birthday (festival theme!) and she's unmarried, has no prospects, and has a group of really unhelpful friends (the alcoholic, the crazy slut, the guy who's really nice but too like a brother...). And so she embarks on an embarrassing and hilarious look for...anyone. This is the movie for people who think that "Sex and the City" doesn't have enough poop jokes (poop jokes involving a senator, no less!) I found it hilarious and over-the-top. The friend I was there with found it too realistic (which makes no sense, since she's married. But it makes more sense if you also know she's crazy). One final note, with this movie and "Young People Fucking", I don't know when it happened but apparently pegging has become a cinematic cliché. Maybe that will be the theme next year. It's a strange new world we live in.

I knew for a fact that filmmakers were around for "Young, Single, Angry", but for some reason there was no Q&A. I assumed they were all drunk at the Paragon, but apparently what happened is that they got to the screening late, whoever introduced the movie didn't say there would be a Q&A, and so everyone just left at the end. Oh, well. Here's a pic of a Young, Single, and Angry protest in front of the theater Thursday night: 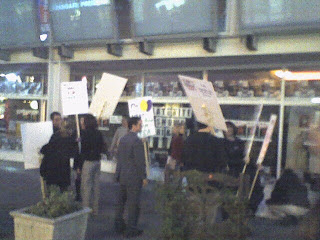 I do have to give the "Young, Single, Angry" gals great credit for promoting their movie. Not only this protest, but giving away great schwag. "Young, Single, and Angry" condoms are the best promotional device since the makers of "Á Columbia" gave out cocaine two years ago.

So then I had over an hour before my next movie, so I wandered over to the Metro VIP party at the Agenda Lounge, just next to the California theater. It had been hopping for at least an hour at this point, so it was already crowded and all the drink tickets had been given away, but I managed to scrounge a few and more importantly meet and chat with filmmakers. In particular, I met Jeremy Thomas, writer/director/star of "The End". I had been debating for several days whether I'd see "The End" or "Speed Dating" in the 9:00 slot this night. But since I met Jeremy, and he seemed like a such an unusual guy and his movie sounded intriguing, I decided right then and there to commit myself to seeing his film. Then I made my way to the exit for my next film and on the way met Tony Herbert, writer/director of "Speed Dating", and he was also interesting and made a good case for his film. Shit! More on that later.

Anyway, first I went to the California to see Eisenstein's classic "October", commission by Stalin for the 10th anniversary of the October Revolution that created the Soviet Union. A little bit of trivia I didn't know, Eisenstein's original cut was much, much longer but Stalin insisted he cut out everything featuring Trotsky. As it is, it's still pretty long, and an impressive look at the start of cinema. Of course, I'm no Bolshevik, and I'm not watching it for the politics. But watching the birth of cinema is fascinating. People had made movies before, but Eisenstein turned them into stories, he practically invented editing. I do have to say, I almost had a heart attack when near the end the film jammed in the projector and burnt through. Then I reminded myself that this is a restored print, it's not the only copy, and I did not just witness the destruction of one of the most important films in history. Still, it was frightening.

And finally, I ended the night with "The End". I am so grateful that I ran into Jeremy at the VIP party, because this ended up possibly being my favorite film of Cinequest. Absolutely awesome. In this no-budget existential thriller/comedy Jeremy stars as Joseph Rickman, a schoolteacher with a legendary past. Years ago, he could see what no one else could see, and as a result saved a girl. Now he's got the same feeling again. Pulled by some force, he wanders into the woods and witnesses a shadowy figure lobotomizing lawn gnomes (yeah, and it hasn't gotten weird yet). Perhaps he's going crazy, and if it wasn't for his past, the local detective (and sister of the girl he saved way back when) would have him locked up. But she goes with it, at least for the time. And then...there's a huge freakin' twist, and I won't tell you what it is. This actually put me in a weird position, because for the rest of the festival I was telling people to see this movie and also telling them to not be afraid to walk out. You see, when the twist happens you'll know, and if you're not ready to follow the premise to well beyond it's logical conclusion, this movie will be painful for you. So just go ahead and walk out. And that's all I can tell you of the plot. I'll just tell you it's weird, it's original (although I could name a half dozen movies that employ some part of the twist, I haven't seen it handled quite like this), it's funny, and it's exciting. It keeps you guessing, and just when you think you know the next twist, something even stranger happens.

Oh yeah, and while there was technically no birthdays in it, it did take place on Halloween, which is my birthday, so I'm counting it as part of the festival's "birthday" theme. Here's a pic of Jeremy Thomas at the Q&A: 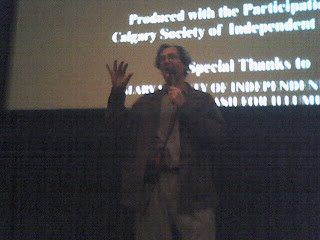 And then (inside joke) I had a couple of drinks at the Paragon but took public transit home instead of driving.
Posted by puppymeat at 9:54 PM

Ah man, I totally missed getting any YS&A condoms, but I still have my cocaine from "A Columbia"!
Whatever happend to that movie and those guys, anyway? I thought it was awesome.

Because I'm bad with tech/internet, I've never posted a comment on anything before. However. . . I found what you wrote about my movie "The End" and was overjoyed that someone who has seen as many movies as you liked it so much; I spent the next few minutes doing 'Nadal'-like fist pumps in the air. Thanks for not giving away the surprise, but even moreso telling your readership you liked my show. As someone as involved with things as you know, it means a lot to a filmmaker!

Thank you Jeremy. I'm honored to be your first comment ever on a blog. I really loved your movie, and wish it well. And as a fan, I'd just plead with you to do your best to make sure it gets at least a quality, well-publicized DVD release (but, of course, hold out for theatrical).

Thanks again, and I hope to see you at a later festival with your next movie.