Now it's all really over for another year.

First up was a hilarious documentary "Killing of a Chinese Cookie". Did you know fortune cookies aren't Chinese, they're American? In fact, there's debate over where they actually started--Los Angeles or San Francisco--and even what immigrant nationality started them--Chinese or Japanese (there's even a theory that they became associated with Chinese restaurants when all the Japanese Americans were put in camps during WWII). This documentary doesn't really take a stand on that issue. But it is fun, funny, and a weird look at a quintessentially (Asian) American bit of pop culture. It's a fantastic documentary and I had a great time with it...in bed!

Then it was off to Indonesia for "Three Days to Forever", a meandering road movie about kissing cousins. Ambar's sister is getting married. She (Ambar) misses her flight. Luckily her cousin Suf is driving across the country to the wedding, because he has to deliver the traditional set of antique family dishes (on which the bride serves her first meal for her new husband). So Ambar catches a ride with him. Between innumerable wrong turns and cigarettes (most of the tobacco is of the "wacky" variety) they explore the Indonesian countryside, religion (they're Muslim in a predominantly Muslim country, but they do visit a Catholic shrine), growing up, and sex. That last one's the most controversial part. But mostly it wanders through lush Indonesian countryside. And the views (of the countryside, and of Ambar) are quite beautiful.

So from Indonesia I wandered over to Thailand. For most people, if they think of Thai cinema at all they might think of Tony Jaa's fight-heavy but story-poor flicks. But to festival audiences Thai cinema is Wisit Sasanatieng. His first two offerings, "Tears of the Black Tiger" (known as the first pad-thai western) and "Citizen Dog" were hilarious candy-colored visual flights of fantastic imagination. In his third movie, "The Unseeable" he calms down the colors quite a bit and uses an earth-toned yellow-green palette to tell a surprisingly and elegant horror movie. He's working firmly in genre here (he did before, with a western and musical romantic comedy, but here he's more interested in paying homage to the genre than putting the genre through a kaleidoscope), and that genre is a ghost story. Nualjan is a young pregnant woman who's traveling to Bangkok to find her husband. Along the way, she takes work as a maid in an old rundown mansion. Legend has it the mansion used to be grand, and a beautiful woman and her dashing husband lorded over the place. Now the madame is still there, but no mention of what happened to the master. Nualjan takes up residence in the servants quarters with Choy, a very superstitious and talkative servant. She's bossed around by the stern and severe manager. And the mysterious madame is there in the house, but Nualjan isn't allowed to see her. Strange things happen, and the story of the many ghosts on the grounds slowly unfolds, with a very effective surprise ending. Sasanatieng shows mastery of yet a third genre, and although I haven't seen anything else that interests me in Thai cinema, if he's the only filmmaking voice Thailand has to offer it's still pretty damn impressive.

Continuing my pan-Asian tour, I travel to Shanghai (and back in time to the 30's) for "Blood Brothers". A stylish Shanghai gangster noir that pays homage to the genre while adding a solid voice to it, "Blood Brothers" is the story of three simple rural friends. Kang is the tough one, Xiao Hu is his weaker brother, and Fung is their best friend--practically a brother--who actually enjoys their simple country life. But Kang has bigger plans--go to Shanghai, become a waiter at a fancy club, and make their fortune. Fung is hesitant, but wouldn't break up the team. When they get there and fall in with crime/film/nightclub boss Hong, their friendship/brotherhood is put to a harder test. They pull together and despite the blood on their hands things are actually looking good...until the beautiful showgirl gets in the way. It relies a lot on cliches, and it could be argued it doesn't necessarily add anything to the genre. But it does pull through with loads of style, and the standard elements come through as homage more than cliche (at least to me. I talked to some audience members who disagreed).

And finally, back to America, specifically New York in the year 2000 (think dot-com bust) for "Pretty to Think So". Here's something I don't think I've ever seen on screen before--a love triangle between an Indian-American woman, a Korean-American man, and a Chinese-American man. Hannah Shah just got laid off as an investment banker and is unemployed in Manhattan. On a night drinking and commiserating with her (still employed) investment banker friend, she meets Jiwon Kim. He's a successful corporate lawyer, unaffected by the dot-bomb, and they start dating. But then she runs into Alex Yuen. He was her childhood friend, back when her family were the only Indians in New York's Chinatown. He had an abusive father and a gambling problem, and ran away when he was little. Now he's a youth minister and attending gambling anonymous meetings (and trying to avoid the free shuttles to Atlantic City). To complicate matters futher Alex is Jiwon's client (renegotiating the lease on their building). There's even some violence as Alex can't escape his difficult path, although the violence seems somewhat out of place in this movie. All in all, it's an interesting look at the time and place and fears associated with the dot-com bust and with growing up, love, and escaping your path. A fine end to the festival. Here's a pic of producer Balaji Srinivasan: 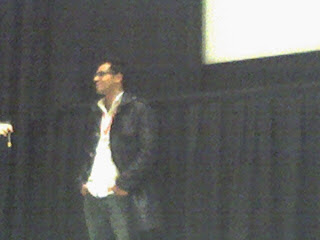 I highly recommend the manga for Death Note. I heard it came after the movie, but I would find that odd. It was the first manga that made me watch the release date for each new installment. Watching the movie after reading it was a letdown, because the cat-and-mouse game suspense seemed lost. It's good to hear that someone new to the story is still drawn in by the movie. Maybe I should give it a 2nd viewing.

I generally prefer movies to manga, but I think this one I'll check out.

Just a warning - it's 12 volumes long. It definitely starts off stronger than it finishes, but it's worth the read.

Also, they are going to have a free showing of Dream in Doubt at the SF Library at 6 p.m. on Wednesday, April 9. I didn't catch it at the SFIAAF last year.

If you're looking to expand your Thai cinema horizons, I wonder if you've checked out films by Pen-ek Ratanaruang? 6inxtynin9 and Last Life in the Universe have a great deal of merit, imho. I also love Apichatpong Weerasethakul, but I'm not as confident his style matches your taste, far-ranging as it seems to be.