This is the movie that Judd Hirsch was in town for last Sunday. I've finally seen it, and it's good. Scott Cohen stars as Jake Groden, and opens the movie harvesting salmon eggs in Alaska. When he's canned for drinking and tossing the fish eggs back into the ocean, we learn that he's an ex-con out on parole. Further, we learn that his parole is being transferred back to New York, sponsored by his brother Mike (twin brother, we learn quickly). He gets there just in time to be rebuffed by his father (Judd Hirsch) and then walk in on the family gathering for his brother's funeral. Oops. Well, he has nowhere else to turn and what he's really good at is making furniture, so he (over some objections) takes over the family furniture business. He's really an artist with amazing furniture designs (his table supported by just one end is amazing). Problem is, nobody wants a Jake Groden piece, they want a Mike Groden piece, even though they're machine made and not very innovative. He just doesn't have the name...but he does have the face, and customers who don't know that Mike is dead. Well...you can see where that will go. But instead of falling into a slapstick mistaken-identity comedy, it remains a solid drama about staying true to your own identity and the pitfalls of being someone else. Particularly when he tries to live Mike's life, with Mike's wife (with whom he has a history) and Mike's son (who thinks he's cool until he turns into Mike). Anyway, great acting, great script, interesting ideas. All around a great movie.

Here's director Todd Yellin (San Jose native) at the Q&A afterwards (and he was a pretty interesting guy, too): 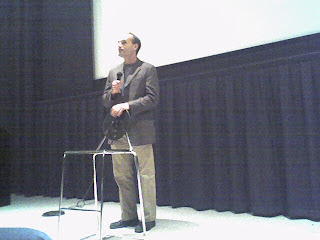