And apparently I'm old or something, because I'm impressed by that. So many of my younger friends don't even know who he is. Well, dammit, he's a fine actor (both dramatic and comedic), a very entertaining human being, and he's a freakin' physicist! At least, he has a degree in physics from CCNY. More people should be fans of his. I'd be depressed, but I had too much fun there.

So he was in town to present his new film, "Brother's Shadow" by local San Jose director Todd S. Yellin. However, yesterday's screening was sold out, so I'll see the second showing next Wednesday. That ticket came free with my ticket to the champagne reception with Mr. Hirsch at the fancy Fairmont Hotel. We all got to hang out, drink champagne, eat hors d'oeuvres, and chat with Judd Hirsch, Todd Yellin, and our fellow film fans. Then SF Film Critic Jan Wahl interviewed him. Here's a little sneaky pic from the front row: 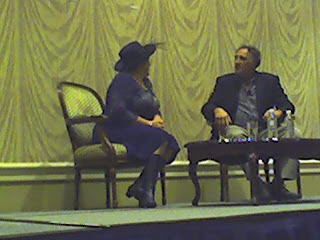 Mr. Hirsch was a very funny interview, especially talking about his parents and digressing into "Independence Day" (he claimed it's the silliest movie he's ever done). Then a little more champagne. I shook his hand and told him I'm a physicist, too. And then it wrapped up and I left for home. It was cool.

The festival begins in earnest for me Wednesday. It's an oddly scheduled festival, playing only Wednesday evenings and Sunday all day for a month.

Posted by puppymeat at 7:38 PM