Jason goes to the closing night of Docfest

And I saw just about the craziest fucking thing ever! I swear, I still don't really believe this wasn't a mockumentary, because this can't actually be real. It was called "Audience of One".

Richard Gazowsky, the pastor of the Voice of Pentecost Church in San Francisco, hadn't ever seen a movie until he was 40 (although it's not revealed in this movie, I have the inside scoop that the movie that popped his cinema-cherry was "The Lion King"). Later he received a message from God, calling him to a very special mission. That mission is to make the greatest movie ever: "Gravity", an epic sci-fi adaptation of the story of Joseph and the coat of many colors. So he forms a film company, Christian WYSIWYG Studios. He knows nothing about making a movie, but knows he wants to make "the Rolls Royce" of movies--quality all the way, no expense spared. So instead of getting a good digital video camera, he insists on shooting in 65 mm (just for reference, nobody has actually successfully shot an entire feature in 65 mm since Kenneth Branagh's "Hamlet" in 1996. Terrence Mallick did shoot most of "The New World" in 65 mm back in 2005). Given that he has no one who actually knows how to load the film, you can tell he's pretty doomed. Still, the early production concept art looks pretty cool, and it's just audacious enough that I'm hoping he succeeds and I'll get to see "Gravity" someday. I totally start out hoping this is an inspirational movie of a naive dreamer who succeeds through sheer determination and a bit of divine help. And when they go to Italy to start shooting, I'm actually optimistic. He's got some backing and although his wife and daughter are doing the costumes and are way behind, he's got a cast (volunteers from the church), Italian extras, a crew, a crane, a dolly track. This looks like a film. Sure, the film jams for every shot they attempt in Italy, and they go back kind of licking their wounds. But they rent studio space on Treasure Island and get right back to work. Or sit around and just get paranoid about security at the studio (he's convinced a spy from Warner Bros. broke in there). San Francisco sues them for non-payment, their investors never come through with cash (at one point he's insisted Deutsche Bank said they'll put $50 million into it), and it looks like the dream is over. But despite having completed exactly 2 shots in 2 years, he's still pursuing his mission. And I won't give too much away, but the closing sermon with his 8 point "arrows that smite the ground" (or something like that) plan to turn everything around really drives home how over the top he's gone. Just a little teaser, the first point is "We'll produce 47 feature films a year" and it gets crazier from there.

Here's a pic of "Audience of One" director Michael Jacobs: 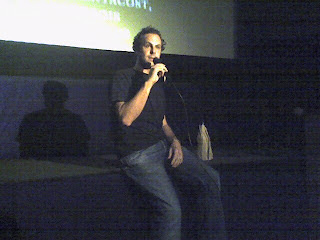 So then it was all over but a few hours of drinking and hanging out at the bar next door with Docfesters, fellow fans, and filmmakers. And now it's all over but the memories.
Posted by puppymeat at 7:57 PM