Aka, the kinda stupid and incredibly exhausting 14 movies straight with no sleep--part 3!

First, I'd just like to say that I absolutely advise against doing this. If you ever want to see 14 movies in one day--do it at a theater or theaters that is/are within walking/public transit of you. Do not drive after being awake for 28 straight hours and having seen 10 movies. Do what I say, not what I do, I'm an idiot!

So I got back to the Roxie in time to order 2 cups of coffee, a bag of popcorn (gotta settle the stomach) and sit back and watch "Ghosts and Numbers". In Thailand, recent financial collapse has created a paradoxical boom in the lottery. People don't just play the lottery, they invest in it. There are ticket resellers who buy lucky tickets and resell them. People consult mediums to get advice from dead relatives on what numbers to play. This film takes a dreamy wander through the streets of Bangkok looking at lottery resellers, lottery players, and TV show hosts who interview people about the lottery, and of course the anti-imperial chicken. It's all narrated by a voice that might just be a ghost herself. The movie sets you up for a pretty odd experience by rating its reality to fiction ratio at (as best I can remember) 8/3 and its cultural accuracy at 74.89%. I now think every documentary should come with those numbers. Here's a pic of director Alan Klima with Docfest programmer Fay Dearborn: 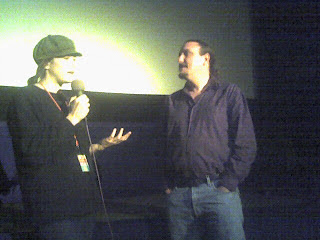 After that, we stayed in Asia, moving from Thailand to Nepal for "Living Goddess", a look at the lives of a young girl who is worshipped as a living goddess--at least until she hits puberty. There are a number of living goddesses in Nepal, and kings traditionally use them to shore up the legitimacy of their rule. This starts as a promising and fascinating look at the system. A little girl who plays with Barbie and blesses her worshippers, set against the background of pro-democracy riots. It's a fascinating 45 minute movie. Unfortunately, it's 90 minutes long. Eventually it just runs out of things to say, and just repeats itself. The juxtaposition of the riots outside with the serenity of the temple is fascinating, but I don't need to see it a hundred times. I don't really need to see a sacrificial goat beheaded at all, but I understand why it's there. But if you show me one goat beheaded, I'll believe you when you say 108 goats were sacrificed. You don't need to show me all of them (okay, it was only about 10 or so, but still that was literally overkill).

At this point I'd like to thank my front-row friend and fellow everything-watcher Maria for confirming that all that repetition was in fact real and not just a sleep-deprived hallucination that got stuck on repeat.

At this point I was pretty loopy, but I made it next door to the little Roxie for a short and a feature. The short was "Ride of the Mergansers", which I saw at the SFIFF. Still adorable!

Then the feature, "Eat at Bills". I was really afraid of this, I had doubts that a feature film about an organic grocery store could keep me awake in my sleep deprived state. Happily, I was wrong. I had no idea how fascinating organic groceries could be, and it's all from the charisma of Bill Fujimoto, the owner of Monterey Market in Berkeley, CA. Bill has long been a proponent of of organic (and delicious) fruits and vegetables, inspiring chefs at local restaurants (including Chez Panisse, which really has the reputation for promoting organic foods. Their head chef credits Bill in the movie). Interviews with Bill and his employees amid the chaos of the market, chefs who shop there, and farmers who wouldn't survive (or wouldn't have gotten a start) without him, paint a lively story of a Berkeley institution. And since it's October and it would be in season, I wanna go climb the mountain of pumpkins there.

And finally, "Hell on Wheels" had the unenviable task of keeping me away after 37 consecutive hours and 13 movies. And this story of the creation of an all-girl Roller Derby league in Austin, TX (theme notice!) had no problem doing that. It's equal parts smashmouth girl (on skates)-on-girl action and backroom politics, as the skaters revolt against what they see as incompetent/uncaring management mistakes (in their defense, the managers are skater or ex-skater "She-EO's" who really have more passion than necessary business acumen). The bonfire showdown alone is (depending on your perspective) either high drama or high theatre. In any case, everyone involved wants all girl Roller Derby to survive somehow, and I'm happy to give the minor spoiler that there are now two viable Roller Derby leagues in Austin (one on a banked track, one skater-owned on a flat track), as well as numerous leagues around the country, including the local BAD (Bay Area Derby) Girls. Many of them were in attendance, and I just have to give a quick thank you to them. Movies are more fun with an enthusiastic audience, and their presence alone made this movie better. I'll look to catch one of their upcoming meets soon. I missed their meet in San Jose last Friday because I was at the movies, of course. Here's a pic of director Bob Ray and producer Werner Campbell: 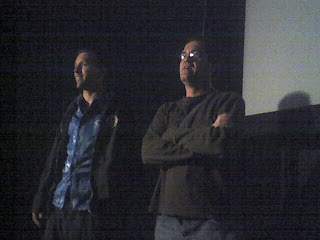 I ordinarily would've stayed for a beer and to chat with the filmmakers, but I was understandably exhausted. By some miracle I managed to not fall asleep on the BART and I made it home safely. Then about 5 hours of sleep and I was back awake at 6 am and heading to work.

And that's Docfest last Sunday. And that's the end of my kinda stupid and incredibly exhausting 14 movies straight with no sleep. And that's also the end of my 10 feature-length movie programs in one day--both new personal records!

Posted by puppymeat at 9:44 PM