Jason goes to Berlin and Beyond--Day 6

After celebrating inauguration day by...going to work as usual but checking in every so often on the CNN.com feed of the festivities (which froze up during Obama's speech), I went back up to the Castro to celebrate Wim Wenders night at Berlin and Beyond.

First up was the U. S. premiere of Wenders' new film, Palermo Shooting. Now I have to confess that Wenders is a director I've always known of, but I'm not really familiar with his work. I think I saw Wings of Desire on video a long time ago, but that's about it (other than Kings of the Road last Sunday night). Well, after seeing Palermo Shooting, I went and added everything he's made to my Netflix queue. It's the story of Finn, a famous and very successful photographer. He takes digital photographs and manipulates them (say, by putting one city's sunset on another city's skyline, and adding a few buildings, etc.) His life is fast and chaotic. One of his techniques is using a 360 degree rotating camera to photograph the scenery as he's driving. However, he's haunted by nightmare images of death and a world literally turned upside-down (the opening credit scene alone blew me away and had me hooked through the whole film). As his life is spiralling beyond his control, he leaves town and ends up in Palermo (Italy). He doesn't speak the language, but meets a beautiful artist whom he can speak to in English, and they become close. Sleep deprived, he has a habit of falling asleep on public benches and waking up to what he thinks are arrows being shot at him. In fact, they're very vivid images--a ghostly white figure in a grey cloak, shooting arrows that quickly disappear. The movie becomes a sort of metaphysical, religious thriller. That cloaked figure is the image of death in a painting his artist friend is restoring. So he's actually being hunted by death. The end scene with death is a bit over the top (kind of has to be, since it's a Dennis Hopper cameo), but the mystery and the strong visuals had me transfixed the whole time.

So after the movie we had a conversation with Wim Wenders. He's a very funny man, and spoke about his criticisms of digital photography. He's a big fan of film for still pictures, although he quickly adopted digital effects for his movies. That was an interesting distinction. He argued that still photography captures truth, and digital photography is a) too easy to manipulate, and b) too easy to toss out the pictures that don't come out the way you want. However, movies were from the beginning about make-believe anyway, so digital is not a problem--you want to be able to manipulate the image to be not quite real. He also spoke very eloquently about the message of Palermo Shooting, which he said was about an affliction he sees in nearly everyone, himself included. And that affliction is not living in the moment, but always thinking ahead to what's next. That's so true, and I feel it in myself (right now I'm thinking I better finish writing this so I can hop on the BART to go to the Noir City Film Festival). I...don't know how to cure that. But at least I can now definitely see that I have a problem.

Anyway, just to prove that not everyone throws out their digital photographs just because they look lousy, here's a shot of Wim Wenders in conversation at the Castro, taken of course on my cellphone: 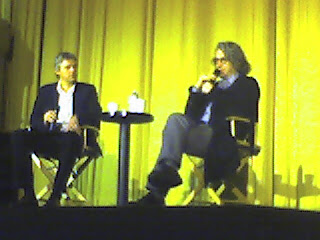 Posted by puppymeat at 5:05 PM

Hrm... what an interesting philosophy: analog film is truer? It's certainly harder to manipulate it, but has been done plenty, most famously with Trotsky:
http://www.newseum.org/berlinwall/commissar_vanishes/reinventing.htm

I'm sure Mr. Wenders has heard plenty such criticism, though. I'm not sure that people don't discard negatives any less frequently than digital pics, either.

I suppose I'm a bit biased on the subject, though.

Oh yeah, I know analog film can be manipulated. And I'm sure people throw out a lot of negatives (although apparently Wenders doesn't, he talked about having 50 year old boxes of negatives lying around).

I thought it was an interesting distinction that a still photograph is meant to capture truth (at least the truth of the moment). But take a sequence of photographs and put them together into moving picture, and all of the sudden the instinct is to use it to create an illusion.

Anyway, of course I was thinking of you when I wrote that, bro.

I suppose that is an interesting distinction - one that I never really thought about. There isn't a film out there that actually captures what the eye sees - I always figured film & digital are really about the same thing: capturing what the photographer remembers as an interpretation of the scene.

Selling a fantasy, if you will.

I suppose arguing with him (or me, for that matter) would be a bit of a philosophical argument.