First, by the numbers. Here's the number of movies I saw each day (click for bigger): 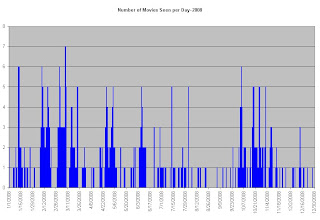 Max was just a measly 7 movies. That might seem like a lot, but not compared to the 10 I saw on one day in 2007 (and that was part of my kinda stupid and incredibly exhausting 14 movies straight with no sleep marathon). An integral part of that was the Santa Cruz midnight mystery movie marathon (6 movies, starting at midnight, the mystery being what the movies are--not that they're mystery movies). Simple reason I didn't repeat that feat--they didn't have it this year (or they had it and I didn't notice).

So how does that look as a histogram? Like this: 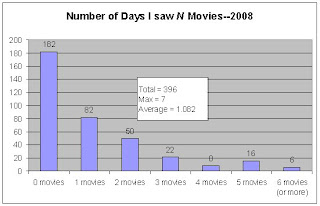 But overall, how does it compare to previous years? 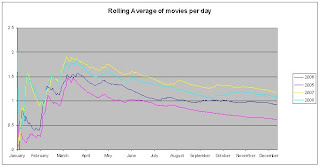 For the first time since I started tracking it in 2005, I saw fewer movies than the year before. And...I'm okay with that. Really.

I've thought about it, and there are some reasons for why I saw fewer movies last year than in 2007. First, 431 movies is a hell of a lot. I suppose I could try to see more, but why would I want to. Second, while I was still interested in all the major film festivals here in the bay area, I was less interested in the general release movies. I haven't actually broken out the numbers to see if more or less of my film-going was at film festival movies vs. general releases in the theaters. I suspect I saw a little less of both types, but probably a sharper drop in general release movies. Just a theory.

But mostly I noticed one pattern of behavior. In 2007 this blog was fresh and exciting and I saw more movies I was only marginally interested in just because I thought it'd be interesting to blog them. However last year was just the opposite. I'm a busy man (yes, I hold a real job), and sometimes I thought about seeing a movie and then decided not to because I didn't want to have to blog about it. That's just stupid, and that attitude has to stop, especially since last year I swore I'd let myself right very brief reviews when I saw a wide release movie and couldn't think of anything interesting to say about it. So my new year's resolution is this: at least 10 times this year, I will not review a movie I see. I'll blog that I saw it, but not waste my time writing unless I'm really inspired.

Finally, most years it's really, really hard for me to say what my favorite movie of the year is. I love many movies every year, and it's really hard to choose. But for the first time in a while, I clearly know my favorite movie of last year. La Antena (aka The Aerial) amazed me more than anything in a long time. I saw it at Cinequest (scroll to the bottom), and it still amazed me when I played it for my family just a week ago. As far as I know, it's only available on Region 2 PAL DVD so far, so here's hoping it comes to American DVD (or better, gets a big-screen release) soon.

And lastly, without a doubt my favorite blogging moment of the year was my review of Iron Man. Yeah, I was trolling, but I thought I made it pretty obvious and enough people got the joke to really make me proud.

BTW, my other new years resolution is to start writing movie titles in bold and underlined, instead of in quotes. I believe that's the correct way to do it (grammar nazis feel free to correct me), but in my pre-blogging days I wrote my reviews as text-only e-mails to friends and family, necessitating quotes instead. I just kept the tradition on my blog for...no good reason. But just because I've made the same premeditated mistake for >2 years doesn't mean I shouldn't stop.
Posted by puppymeat at 4:54 PM