Jason watches "The Judge and the General"

This was the one movie I heard about and most regretted missing at the SF International Film Festival. So I had to see it when it played for one night only at the Roxie, in advance of it's PBS premiere (on POV) this week (check your local listings--in the SF Bay Area it's on Tuesday at 10 pm on KQED).

Part Chilean history lesson, and part profile of a remarkable man, this is the story of judge Juan Guzmán, who by luck of the draw ended up investigating charges against General Augusto Pinochet. In the Chilean judicial system, when a charge is brought it's the judge who leads the investigation. When Pinochet was finally extradited back to Chile and the lawyers for the victims drew Judge Guzmán, they thought this was bad luck. He's from a well-off right wing family that had supported Pinochet (at the time when he seized power as an anti-communist crusader). Nobody expected him to investigate as thoroughly as he did. But he took on his duty very seriously, very carefully, and most importantly very transparently. He digs up bodies buried 30 years ago to find bullet holes in the skull (contradicting official reports that the guy died in a car accident), dives in the ocean looking for remains, and even digs up evidence of his own (unwitting) involvement in cover-ups. It's a truly remarkable story, not just about the dark history of Chile under Pinochet, but about how an honest, conscientious man looking for the truth will find--even if it goes against his natural bias.
Oh yeah, and I almost forgot, here's a picture of producer/director Elizabeth Farnsworth at the screening: 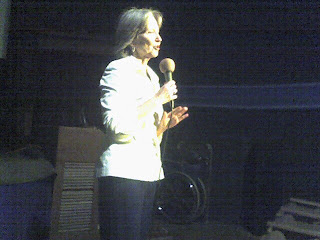 Posted by puppymeat at 8:51 AM