More proof that I've arrived on these here Internets! And just after I claimed the Front Row Crew are not my "disciples", one of them sends me this: 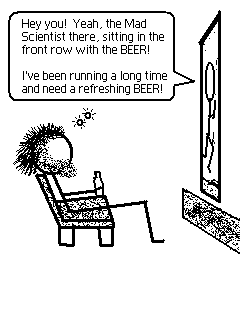 I like this, it simultaneously makes fun of my career, my slovenly appearance, my movie addiction, my raging alcoholism, and my skills of an artist. Plus it looks like I've had a psychotic break with reality and the movie is talking to me. And that's exactly the psychotic break I wanna have! Although I want my psychotic hallucinations to give me beer, not demand it from me.

He also sent me an early prototype of the mad scientist character, apparently making bubble appear from an Erlenmeyer flask through use of a magic wand (little known secret--science doesn't exist, we all use magic and just call it science) 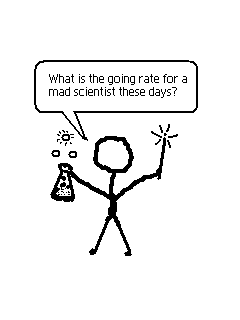 All credit goes to Alan for the artwork (Go MS Paint! Sad that you can do better there than I can do with pen and paper). The line in the second comic is mine. I said it to him once and now he can't get it out of his head. So I guess I inspired this all. I apologize.
Posted by puppymeat at 8:26 AM

Email ThisBlogThis!Share to TwitterShare to FacebookShare to Pinterest
Labels: funnies