One of the Holy Weeks of the film festival year started last night! It's great to be back, and I'm looking forward to a good looking lineup this year.

It's already started off better than last year. The opening night film was "The Gene Generation". The only caveat I have to put on this film is do not try to understand the science or take it seriously. I guess the second caveat I can put in there is while they accomplished a lot with a very low budget, the fake CGI backgrounds loook like...fake CGI backgrounds. I know this bugs some people, I can easily forgive it if the movie is interesting enough (and this one certainly was). What you should enjoy is the stylish cyber-punk Bade Runner/Crow future set design, the gross out giant worm/tentacles, and Bai Ling kicking everyone's ass (and showing her boobies in a brief love scene), and some good ol' sadism.

In the future, gene therapy research advanced to the point where you could heal instantly with a touch, or kill instantly (with tentacles that burst from the victims body--this is the science you shouldn't take seriously). Hayden technologies, the inventor of a DNA manipulation glove called a "transcoder", is blown up shortly after the weapon capabilities were starting to be explored (and turned Faye Dunaway in to a tentacle beast). One scientist survived, with the last transcoder. In the world left after the explosion, DNA hackers thrive, as do the assassins hired to take them out. The best of these assassins is Michelle (Bai Ling). Her problem is, she has a worthless brother, Jackie. He's a drunk and a gambling addict who's always getting beaten up for his debts. To maybe get a little scratch to help pay off debts, he robs his neighbor, and finds nothing of interest other than this weird glove like thing that clamps to people's hands and burrows into their skin (a Chinese finger trap for idiots?). The transcoder becomes both the MacGuffin and a weapon for the action that follows, as everyone struggles to possess it, and then to not be destroyed by it. And all the while, everything just looks fucking cool. No more plot spoilers, I'll just end by saying I loved it, and here's a pic of producer Keith Collea and director Pearry Teo: 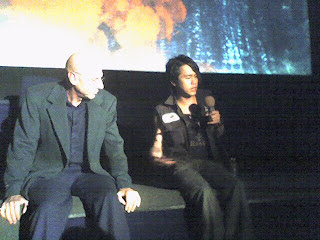 Then I stayed for the second film of the night (rather than going to the after party), a Thai horror movie, "Alone". The premise is so simple and effective that it seems odd that I've never seen it before. Simply put, a woman is haunted by the ghost of her conjoined twin (or Siamese twin. Hmmm...Thailand used to be called Siam). Pim and Ploy were conjoined twin sisters, and obviously very close as children (in all senses of the word). But their bond became more like shackles just as soon as Pim fell in love with Wee. To be with Wee, Pim convinced Ploy to go along with the operation to seperate (they were attached by a small section of their bellies). Ploy didn't survive. Pim and Wee moved to Korea to get away from it all. Now her mother is sick in the hospital, and Pim returns home to look after her. Ploy's ghost uses the opportunity to attack.

But what impressed me even more than the simplicity of the premise was the excellent creepy atmosphere and just how well done everything was--even the scares I knew were coming still made me jump. A while back I mentioned that I was a big fan of Wisit Sananatieng and as far as I'm concerned he's the beginning and end of Thai cinema (other than the martial arts of Tony Jaa, which have never had a great story to go along with his skills). Well, since then the movie gods seem to have conspired to show me there's more to Thai cinema, like writer/directors Banjong Pisanthanakun and Parkpoom Wongpoom. New resolution, I will no longer ignore Thai cinema, and especially Thai ghost stories--they have excellent atmosphere.
Posted by puppymeat at 10:20 AM

Beautiful Boxer - the Thai movie about the kickboxer that had the sex operation. It was based on a true story.

Last Life in the Universe, directed by Pen-Ek Ratanaruang, also of the above-mentioned 6ixtynin9. A tad (but only a tad) artier than his earlier films, it's a love story between a library assistant with yakuza roots and a jaded Thai waitress. A cameo from Takashi Miike rounds out the meal. You may also like Pen-ek's Fun Bar Karaoke and Mon-Rak Transistor more than I did, but wait until you've seen the other two first. Unfortunately his more recent films have yet to screen in the Bay Area.

Nang Nak by Nonzee Nimibutr. The horror movie that topped Titanic in all-time box-office receipts in Thailand. You'll love it, I'm sure; it's not just a ghost story but also a period piece.

My favorite Thai director is Apichatpong Weerasethakul, but his films are not for everyone. I'm not sure if they'll be quite up your alley, but you might as well start with the often-bizarre Blissfully Yours to see.

Bangkok Dangerous is no masterpiece, but it's pretty darn good. See it before the Nicolas Cage remake comes out later this summer.