The big day at the festival, with 5 features and one short.

First was the world premiere of "Circulation", a movie that has nice scenery and an intriguing premise, but falls short on character and plot. Noir-tinged narration opens the film with the narrator explaining that he died a while back and ever since he's been driving his truck on Mexican roads to Cabo San Lucas. So you know it's going to be strange, and it took me a while to get the death logic. Figuring it out is part of the challenge, but I'll reveal it here anyway. When you're dead, you take on aspects of an animal. The narrator Gene is a spider. He kills flies, wraps them in rope, and dines on them. He runs into Ana, who at first is on the run from her psycho ex-husband. She's a caterpillar, he's a dog. Her brother's a snake, etc. To complicate matters, there's a language barrier as Gene only speaks English and Ana only speaks Spanish. It's a good premise, and I definitely appreciate that director Ryan Harper didn't spell it out completely, choosing to let the audience figure it out themselves. But it was also very slow, too many times I was just waiting for something to happen. In fact, I'm kind of still waiting for something to happen. Here's a pic of director Ryan Harper: 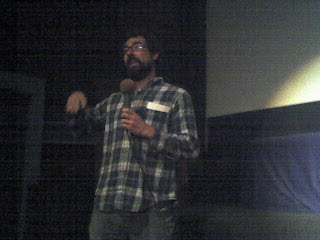 Next up was the movie I was actually most looking forward to in the festival, "Summer Scars", so it was disappointing to note it had the worst attendance so far (at least of the screening I've attended). But that just means it's a more exclusive treat, at least I liked it. The previous collaboration of director Julian Richards and star (and British horror icon) Kevin Howarth, "The Last Horror Movie", actually changed the way I thought of horror movies and what it means that I'm a fan of them (in a nutshell, I had to become comfortable with the fact that I'm a bit of a sick fuck to like horror so much). "Summer Scars" is a bit less ambitious/audacious, but it's still a great movie on the strength of interesting characters and a tour de force by Kevin Howarth. A group of school friends (5 guys and 1 girl) head off into the woods for a bit of fun on the first day of summer vacation. They run into an eccentric loner Peter (Howarth). Literally, two of them are zipping around on a motorbike and run into him (or maybe he jumped out and attacked them). At first he seems kinda creepy, but then kinda cool. He enlists them to search for his dog Jesus (there's a lot of "looking for Jesus"/"I've lost Jesus" humor in there). He takes them to spy on a couple having sex in a car. He chases off older bullies (with his pellet gun, which becomes very important). But then he crosses some lines--particularly violent lines. He tries to teach them a lesson (which some might not get for 20 years) by having them all attack him. The fighting goes a little too far, he freaks out, the kids freak out, it becomes a pretty bad day. It's kept far more engaging than this synopsis sounds by the strength of fantastic acting all around. But there's also another point, that I didn't quite realize until I was thinking about it later. As a horror movie, this is about the fear of growing up (it's a horror coming-of-age story). And really, it's more Peter's horror than any of the kids, because the kids all have a good shot at a bright future. Peter is the one who has failed to grow up right, and as he's trying to impart his wisdom on the kids you can see his scars and how he's living the horror. The kids lived through one horrible day, Peter's lived the true horror of his life. Or maybe I'm reading too much into it, but it's still very, very cool.

Next was an excellent sci-fi flick "Homeworld". I have to start with a comment from director Phillip Hudson at the Q&A. He and his writing partner Glen Settle had shopped many scripts around Hollywood, with no luck. So they decided to make their own movie. Philip wanted to make it epic, about something like "saving all of humanity...from extinction! We have $5,000 to make it!" So that was the impetus for cleverly turning "running around in the woods" into "saving humanity". In the future, humanity is in a fight for survival with the evil Mendax, a race of mind-controllers bent on subjugating "inferior races". A small crew is tasked with a last-ditch mission to the Mendax homeworld. Only Doctor Bayne and Captain Dolen know the real mission, but when they crash land and the captain is injured the Doctor explains it--release a virus that will kill all the Mendax (and maybe them, too, but that's a small price to pay). Along with the Doctor and the Captain, there's Corporal Hart (the religious one with doubts about the mission--if God created the Mendax, doesn't he love them, too?), Lt. Gray (the smart one, with torn allegiances), and the only girl, Sgt. Fulsom. (BTW, notice there's meaning in almost all the names--Bayne becomes the bane of their mission, Gray sees things as neither black nor white, Hart is the one with a heart...). Trudging through the woods to the Mendax city, they come across and capture a Mendax--maybe. He looks completely human, but Mendax can do that. And suspicions and mistrust plague the crew (mostly from Bayne)--Mendax can cause that, too. Meanwhile they're all having strange dreams (Mendax again). And that's the beauty of the premise--since Mendax can control your minds, everything you see, hear, and believe might be a lie. And they play that too the hilt without it getting ridiculous (and I freakin' love the ending! But no spoilers here). So big kudos to the writing for that, and kudos to the actors for pulling it off. There was a big crowd there for this, its world premiere. Here's the only really decent pic I got, director Philip Hudson and actress Larissa Kasian (Sgt. Fulsom): 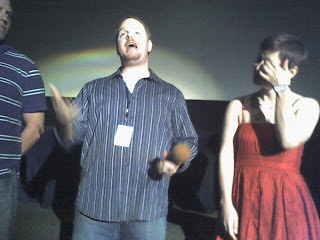 I just noticed that both "Homeworld" and "Summer Scars" had a bunch of guys running around in the woods with one girl. Theme?

Next program was a short and a feature, both with loads of gratuitous gore. The short, "Stink Meat", came with its own promotional barf bag (which I didn't quite need and wouldn't have worked anyway, it was just a paper bag and barf would've leaked through in a second). Anyway, a girl is tied to a chair and forced to eat meat--meat of a certain type of animal. Okay, it's human. You can see it here, it's just 5 minutes and it's pretty gross. Best short so far.

And the feature, "Trailer Park of Terror" was exactly the best you could expect from a movie called "Trailer Park of Terror". 20 years ago, Norma was "the queen of the trailer park". Smart, pretty, she had a future--i.e., she was gonna get the hell out of there. Too bad the grotesques living at the park didn't take to kindly to her new boyfriend. They just had to push him around a bit...oh, and kill him. So she ran...right into the arms of a tall, dark stranger (okay, the devil) who in exchange for her soul gave her a charmed gun to kill the whole fucking lot of them...and then she blew up the trailer park. Fast forward 20 years, a small group of troubled kids are on their way to a church retreat, driven by their young pastor. They crash into a truck (that's just there in the middle of the road). They search for shelter, find a trailer park, see a light on, and are welcomed by...Norma, queen of the trailer park. It's one of those little slices of hell on earth demon region flicks, as all of Norma's victims are demons who only come out at night (the rock and roll demon was my favorite, and actually the music is possibly the best part of the film). There are no surprises in the overall story arc, but there's plenty of blood, and it's all thrown out there with cartoonish glee, like this is straight out of a comic book. Oh yeah, it is, from Imperium comics. Anyway, here's director Steven Goldmann and possibly the grossest trailer park resident/demon, Tricia Rae Stahl (Larlene): 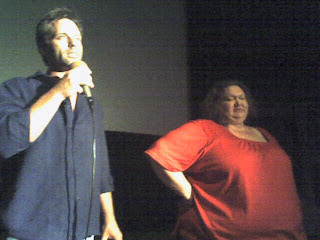 And finally, the midnight movie, after a few free Red Hooks, was the 40th anniversary presentation of "Barbarella", taking you back in time to when people wanted to see Jane Fonda's tits. I don't know how to start describing this, and I assume most people who are at all interested have seen it (if not, what's keeping you, it's been 40 freakin' years?) It's a bizarre, colorful parody of sci-fi and porn. Jane Fonda is a supremely sexual space traveller (although in the future, making love means touching hands and taking pills), tasked with a mission to travel to the world of pure evil and stop the evil Durand-Durand. Along the way she meets an odd collection of characters, first one who teaches her a different way to make love. Later a blind angel named Pygar who has lost the will to fly--if only she had just learned something that will improve his morale. It even has Marcel Marceau (in a speaking role) as Professor Ping. Why isn't this movie bandied about with the likes of "Casablanca" and "Citizen Kane" when arguing about the best movies ever? Oh yeah, and Robert Rodriguez is re-making this, and as much as I like his work, I have to ask, "Why remake perfection?"

And that was Saturday with a Hole in the Head.