Another 4 movies on Sunday. I'm over halfway through, and the hard parts over (just 2 movies a night for the next 4 days, piece of cake).

The first program started with the short "The Adventure", by the guys who did "Blood Car". In fact, it was directed by Mike Brune, the star of "Blood Car". A couple takes a drive in the country for a picnic, but they're interrupted by an adventure that forces you to ask, "where did these freakin' mimes come from". Also, "If a mime mimes killing a mime, does the mime die? Does it depend on how dedicated he is to the role?" Pretty funny, in a totally absurd but deadpan way.


Then there was a real oddity for a genre festival like this--a documentary. "Your Friendly Neighborhood Hero" chronicles the adventures of real life superheroes. These are real men who put on costumes and patrol their cities. For the most part, they don't actually fight violent crime, but they help the police and set a good example. The sort of 'mentor' or 'voice of authority' is a guy who calls himself (none to originally) "Super Hero". He patrols the streets (in the only known real life supervehicle), brings lunch to the police, and talks to kids. There's also "Mr. Silent" (who's surprisingly talkative behind his silver mask. And who's also pretty stylish in his suit, mask, and cane). There's the young up-and-comer from Durham, "Hardwire" (his logo is the power button on most PC's). And then there's New Orleans' own "Master Legend"--the absolute freakin' nutcase. Honestly, Master Legend makes the movie work, because without him it'd be about normally sane people who go out on the streets in costumes to set a good example and try to help people out--but mostly avoid actual violence. Master Legend wants the violence--he proudly brags about beating up child molesters and crackheads. He has an arsenal complete with potato cannon (which he shoots anything but potatoes out of), a paintball gun full of "pepper balls", a staff (which he keeps hitting into his roof), and more. He has run-ins with the cops as well as the criminals, and has gotten injured in the line of duty (minor scrapes and finger injuries, as best as I can tell). And it's not that I approve of Master Legend's approach--I think he's a nut (he claims he flew once as a little boy, he has psychic powers, and he mixes voodoo potions). It's just that he adds the spice that makes everyone else look saner (and blander). But even without him, I'd still be left wondering if they're for real or if this is just the best mockumentary ever (verdict: I'm at least convinced they're real).


Next up was the family friendly program, starting with the short "Somewhere Over the Flagpole: a Nintendo Movie". You know that flagpole? The one at the end of every level of Super Mario Bros? Ever wonder what would happen if you managed to jump the flagpole? Crazy stuff, I guarantee. A cute, fun little movie (although you have to have some patience for child actors). Here's a pic of DP Max Well, director Alexander Lamb, and a producer who's name I didn't catch (sorry. But you can barely see his face in the shadows anyway): 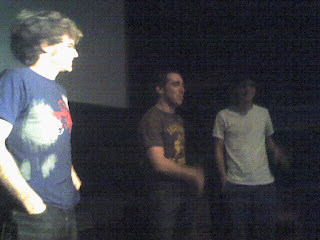 Then the feature, "Atom 9 Adventures", which was practically a one-man effort by writer/director/star/CGI effects guy Christopher Farley. A fun, cheesy, comic-inspired story about an asteroid that hits earth, the scientist who finds it and the amazing metal parasite inside. So amazing, it's DNA contains the original atom from which the Big Bang happened (okay, don't watch it for the science lesson, it's intentionally cheesy). When the villainous Gremlo Flugg steals the meteorite and blows up the lab of scientist Adam Gaines, the metal parasite bonds with his damaged back and he becomes the super-powered Atom 9! Flugg wanted the metal parasite to power his doomsday weapon, and along the way he wanted to kidnap beautiful scientist Margo and make her his wife. So newly minted superhero Atom 9 must save the day, with the help of his wise-cracking floating robot Jimbot. Silly, cheesy fun. Here's director Christopher Farley in the lobby after the screening: 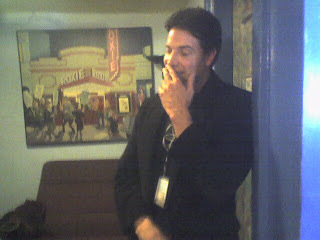 Then the night moved into less family friendly territory with "Yaji and Kita: Midnight Pilgrims". Imagine if Monty Python took a ton of drugs and made a Japanese movie about gay samurai travelling in a mix of modern and ancient Japan. Got it? Now imagine the same thing, but about 10 times as weird as you originally imagined. Nope, still not there. Weirder still...sigh, you won't get it. Just watch it when it plays again, Monday June 16 at 5 pm, or Thursday June 19 at 7:15. There are gay samurai, tons of drugs, horrible singers, good singers, psychotic officials who demand comedic performances, love triangles, mushrooms, murders, the river Styx, weirdness, weirdness, and weirdness. And after the ending, it gets really weird. So weird, it actually starts to make sense.


And finally, the last program of the night features something that was missing all day--bloody gore and nudity. Okay, the short only featured bloody and gore, but there was also fucking in a car. "My Wife is a Zombie" is based on a true story. A man is making love to a woman in a car. That woman isn't his wife. That's clear when she orders him to call his wife a bitch. Turns out, his wife is home and is very sick. He's a bad man. But his wife is a zombie. I won't spoil the ending, but I will mention that the "true story" is not nearly as nasty as the movie.


And finally, "Brain Dead" piled on the gore, boobies, and more. A mysterious asteroid (another theme of the festival, or just horror cliche?) crashes on earth--specifically, into the head of a guy fishing. It kills him, of course, but then he gets up and rips his fishing buddy's head off and eats his . Clever transitions keep it moving as quickly as possible as we're introduced to various characters. The two cons, one sarcastic and one psychotic. The preacher and his pretty little assistant, off for some not-so-holy work. The two hiking girls, one who just likes to get naked and one who would specifically like to get naked with the other one (woo hoo, special effects by God! With maybe some help by a good surgeon?) The cops, the park ranger, etc. Rest assured, this is the kind of panderific sleaze where every female character will get at least topless. And once the gore starts piling on, courtesy of Gabe Bartalos (who directed "Skinned Deep", which made its US premier at the first Holehead back in 200), it really cooks. A lot of fun, and it had the perfect drunk boisterous audience for it. As a cinephile, I would've maybe preferred about 10% less drunken commentary, but until they invent a device that filters out the dumbest drunk comments and leaves only the clever drunk comments, I'll enjoy what it was. And here are two of the guys responsible--producer Greg McKay (I think) and director Kevin Tenney 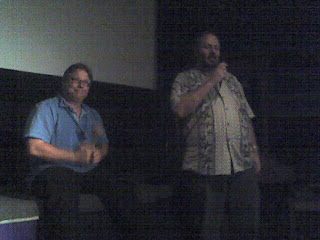 Posted by puppymeat at 9:41 AM

I apologize if I was the source of any of the terrible-ten-percent...