The fun continues with three more movies, and a couple of shorts.

First up was the local short film, "Imp of Satan", which I like to call "Buttsecks of the Dead". A gay couple decides to move in together since one is having problems with his apartment/landlord. So he calls to tell his landlord he's breaking the lease. Too bad the landlord worships Satan. There's no way I could name them all, but here's a pic of all the Satanic imps behind this movie: 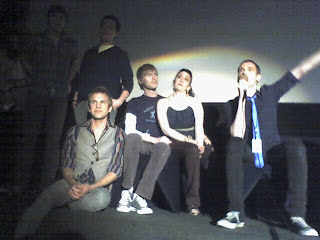 Then the feature film paired with the short was "Mindflesh", based on the novel "White Light" by local author William Scheinman. Chris is a cab driver, but lately he has neglected work to chase a vision. He swears he can see a beautiful (and often naked) woman, but whenever he chases her she disappears. His friends think he's crazy, and maybe he is but they're not really ones to talk (especially the cop who jacks off to crime scene photos). Things get especially strange when the mysterious woman becomes very real--at least for times. A friend loans him a book which might hold the answer, he tracks down the author who's angry and frightened by him. It all has something to do with his "Supernature". Maybe he has the psychic ability to make his obsessions flesh, or maybe his mind holds the passage to other levels of existence. What is sure is that there's a very naked woman in his home a lot, and they have sex (which might be literally him fucking his own mind). And this all has to do with some terrible childhood trauma, which manifests as some hideous fucked up imagery (I won't get the crotchful of maggots out of my mind for quite a while). Anyway, here's a pic of the sick bastards who came up with this--director Robert Pratten and author William Scheinman: 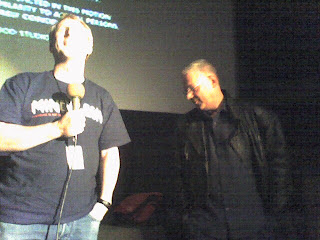 And then I saw the early winner of the festival so far, and an excellently twisted Japanese splatstick comedy flick, "Machine Girl". Ami is a peaceful but athletic girl. Her parents are dead (suicide after being accused of murder) and all she has is her little brother Yu. He's picked on by bullies, led by the son of the local ninja Yakuza gang. They kill him, she gets revenge they get revenge back, she gets more revenge. A good time is had by all. That good time involves tons of blood, ninjas, severed digits, limbs, heads. A machine gun arm, a chainsaw leg, flying guillotine, and tempura. That's just to name a few of the delights. A crowded theater was whooping it up all through the chaos. I think we have a new certified cult classic.

Oh, and for fans of Japanese splatstick gore-comedy, not only does "Machine Girl" play twice more--June 12 at 5 and June 14 at 9:30--but Holehead has added a new bonus closing night screening. On June 22, 8:00 at the Brava theater (24th and York) they've added the west coast premiere of "Tokyo Gore Police", with effects by the same guys who did "Machine Girl". This isn't on the printed schedule, and I don't know how prominently announced it is on the website. So you just have to be in the know. And now you are.

And finally the last show, with free beer by the wonderful sponsor Red Hook (at all the midnight shows). First up the short "Date of the Dead". Blind dates can be frustrating, but when your date has to constantly excuse herself on some pretense so she can feast on the flesh of the living, that's kind of awkward. And here's the guy responsible for it, local director Dusty Caruso. 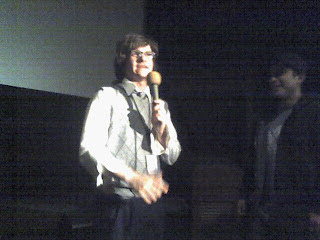 And finally, the best title in the festival, "Mutant Vampire Zombies From the Hood". This one I'm dedicating to all my colleagues in nuclear medicine, since it starts with a drug deal gone bad in a Compton nuc med supply warehouse. This is actually important, because the lead walls storing all those radiopharmaceuticals protect them from the massive solar flare that turns nearly everyone else into zombies. Interestingly, this movie approaches the fast zombie/slow zombie/smart zombie logic in a unique way. The solar flare causes mutations that manifest differently in different people. So the survivors (one cop and several drug dealing gang members) have to battle all different types of zombies, including ones so smart they pass for human. Along the way they make references to Romero movies and others ("Aliens" comes up a lot) on their way to a surviving scientist who is broadcasting on public access TV. The scientist happens to have a really hot daughter, so repopulating the planet won't be a problem (and in the one sex scene she gets off on letting the zombies watch. That was pretty twisted). But first they need to get to the airport and escape. Basically, this was a great movie for getting drunk and shouting at the screen. It was a lot of fun. I wonder how it plays sober. Here's the homey who made this flick, Thunder Levin: 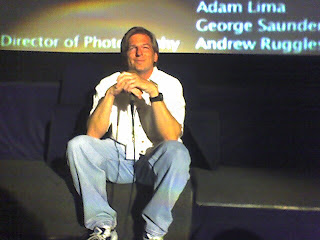