Last night was the night of comedy.

First up was the short, "Meter Maid Me Massacre" by local wild man Cecil Feeder. I had seen this last year at Dead Channels and described it at the time as a "crazy fucked-up kung-fu zombie splatstick comedy about the evils of San Francisco meter maid demons." I'll stick by that, and add this movie rocks!

Then the feature, "305", a parody of "300" meets "The Office". I'm so bad at watching movies online (I rarely go to YouTube) that I wasn't know the short that started with, so apparently most of the audience started out better informed than I was. But I had seen "300" and a couple episodes of "The Office" (I know, it's great, I should watch it all the time. I just don't have the time), and that's all you need to know. If you remember in "300" there's a small goat trail that the Persians discover and use to outflank the Spartans in the end. Well, this is the mockumentary story of the 5 soldiers tasked to guard that goat trail. They happen to be the 5 worst soldiers in the Spartan army. Claudius is their leader, the "East District Manager of the Spartan Army" and a fat slob who always carries his coffee mug and fights with a rolling pin. Demetrius is blind, Darryl is a suck-up and an idiot, Testicleese is the puny hero of the movie, and Shazaam is from the far east side of Sparta (so far east he's Persian). Of course, they completely fail to protect the goat path and king Leonidas and his 300 soldiers are destroyed. That's apparently where the Internet short ends, but they've continued it to feature length. 2 years later, they're all disgraced and in hiding (except for Daryll who's selling books about it and wearing a t-shirt proclaiming "I survived the battle of Thermopylae"). The documentary crew tracks them down, does follow-up interviews, and in the process Claudius is kidnapped by the Persians as part of their plot to finally destroy Sparta (as a commander, he has a key to the city). And so the survivors come back together (pretty reluctantly) to rescue Claudius and save Sparta. It's a very silly spoof, of course. Lately spoofs coming out of Hollywood have been pretty bad, more a string of pop-culture references than jokes. So I'm happy to report that "305" does actually contain jokes. There's probably about a 50-50 mix of groaners and knee-slappers, but that's a significant step up from recent big-budget spoofs (I assume, I actually stopped watching them. Anyone want to comment saying that "Meet the Spartans" was actually hilarious?). So anyway, if spoofs aren't your thing, I don't suppose you'd care anyway. Spoofs aren't really my thing, but I gave it a fair chance and it was not that bad. Here's a pic of actor David Schulz (Daryll the suck-up idiot) and co-director David Holechek at the Q&A: 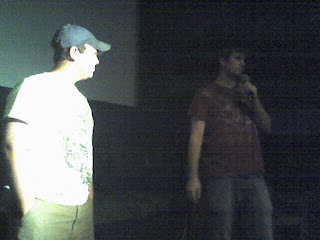 And then I saw what I hope will be the start of a new classic horror series, "Jack Brooks: Monster Slayer". Jack is a young man--a plumber by trade--with an anger control problem. It could have something to do with unresolved childhood issues. Specifically, when he was a little boy a monster killed and ate his mom, dad, and little sister while he cowered in fear behind a tree. That kind of messed him up, and although he's got a cute girlfriend and is trying to better himself at night school science classes, his temper keeps getting in his way. He's pretty sure he hates his girlfriend, and he can never get to class on time, which really bothers professor Crowley (Robert Englund, who's successfully gotten beyond his Freddy Krueger role to become the king of low-budget horror comedies). Professor Crowley has just moved into the creepy old house on top of the hill, and has some problems with the old pipes, so he enlists Jack to help him. Unfortunately (of course) that banging around on the pipes unearths an old buried evil that soon infects the professor, makes him sicker and sicker, until he turns into a monster and attacks the class. Finally, Jack has an outlet for his anger! I really liked how the monsters (except the opening/closing monster) looked like practical effects, not CGI, which gave it a good 70's/80's cheap monster flick style. The only thing that wasn't perfect was that it felt brisk. I think it was a little less than 90 minutes, and I could've definitely enjoyed 2 hours or more. But it's good to leave the audience wanting more, and I'd be the first in line to see the sequel (if it were playing around here...at a time that's convenient for me. Otherwise I'd just see it as soon as I could).

Just one more day, then a week of repeats, and then closing night! This festival has been much better than last year.
Posted by puppymeat at 10:28 AM